Angela Rayner grilled by Mordaunt over question asked in Parliament

Angela Rayner was making her debut as the Shadow Chancellor of the Duchy of Lancaster in the House of Commons, however, Penny Mordaunt did not pull any punches during a four-minute-long dressing down of the Labour Party’s Deputy Leader’s claims. Ms Rayner was also interrupted by Speaker of the House of Commons, Sir Lindsay Hoyle, regarding an inappropriate question she had asked in Parliament.

The Conservative MP said: “I would suggest to [Ms Rayner] that an Essex MP is perfectly entitled to forward an offer of help from the Essex Chamber of Commerce to help in a pandemic.

“MPs do it all the time, it’s part of our job, but [Ms Rayner] already knows this too, and I’m afraid so does everyone else.

“The urgent question today has more to do with Labour’s internal politics and divisions than the conduct of members of this House and enterprises who have been working to help the NHS and to save lives. 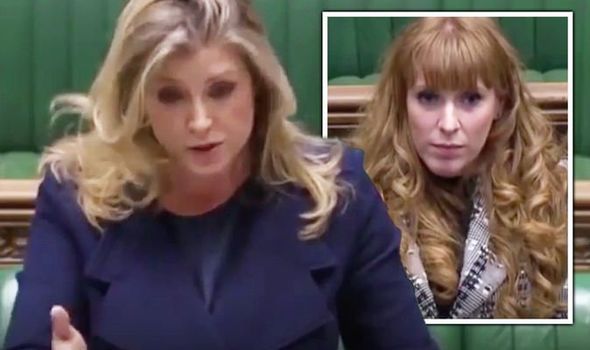 “[Ms Rayner] has made particular accusations today about colleagues and I just want to make a final point.

“Because if you were to take every single MP she’s made an allegation about this afternoon, and you were to look at all the political donations they’ve received since the pandemic started – since January 2020 – if you were to add them all up, if you were to double them, no, if you were to quadruple them you would still just about match what [Ms Rayner] herself has received in the same time period.

“And she should thank her lucky stars that we don’t play the same games that she does.”

Viewers of the brutal House of Commons clash took to social media to share their thoughts.

Political commentator Darren Grimes tweeted: “Hello, police? I’d like to report a murder on the floor of the House of Commons.

He added: “That ending of “she should thank her lucky stars that we don’t play the same games that she does” is pure *chef’s kiss*.”

Another wrote: “Oh dear, Angie isn’t going to cope with the step up, playing with the big girls and boys.”

A third said: “Interesting that Rayner pulled her mask on halfway through.

“To hide her embarrassment obviously.”

“Let’s hope @AngelaRayner stays in her position as that will help keep Labour in endless opposition.”