Alex Salmond 'could be thorn in Sturgeon's side' warns expert

The one-time SNP First Minister said his Alba Party would try to win enough Scottish Parliament seats to gain a “super majority” for independence. But opponents said he was a “discredited figure” unfit for office. The party’s launch on YouTube was plagued by technical problems, as Mr Salmond defended himself against claims he was a “bully” and a “creep”. He said it was time to accept the verdict on him from two courts, a jury and three inquiries and “move on”.

The ex-MP, who was cleared of sex charges last year, said Alba had “substantial” support from women.

First Minister Ms Sturgeon, his former protege, did not respond as she campaigned near Glasgow but the SNP said his “self-interest” would damage Scotland’s recovery from Covid.

Mr Salmond said his move was not linked to the feud which has gripped Scottish politics and said he “wished SNP well”. He believes Alba – Scots Gaelic for Scotland – can put pressure on Boris Johnson to grant another independence referendum.

After poaching Eva Comrie from the SNP he has four candidates but agreed filling a full list by Wednesday’s deadline was a “herculean task”.

However, he pointed out that Nigel Farage and France’s President Emmanuel Macron had both launched successful parties close to elections.

Mr Salmond said: “I am hoping as I put forward a positive case of independent Scotland, a case for super majority in the Scottish Parliament, that the contribution that I will make…the contribution we can make to the economic recovery of this country from the pandemic and then the construction of that new independence platform via Parliament and not just a political party, is a strong argument. 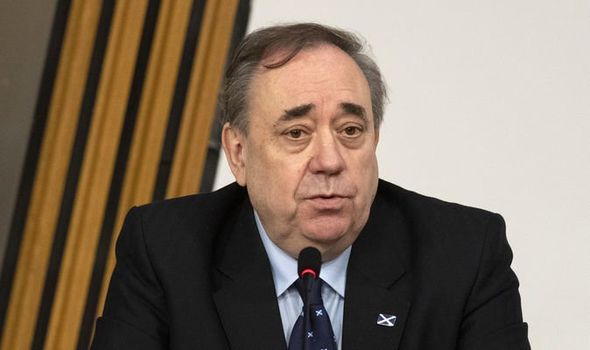 “We’ll find out over the next six weeks.”

He insisted Alba had no ambitions to form a coalition.

An SNP spokesman said: “The interests of the country must come first and should not be obscured by the self-interest of someone who shows no sign whatsoever of reflecting on serious concerns about his own conduct.”

Bookmakers lengthened the odds on an SNP majority on May 6.

Scottish Conservative leader Douglas Ross said: “Alex Salmond is a discredited figure. Right-thinking people will want nothing to do with him or his new party.”