‘A brilliant leader’ – Red Wall Tory PMs still back Boris, even through the migrant crisis 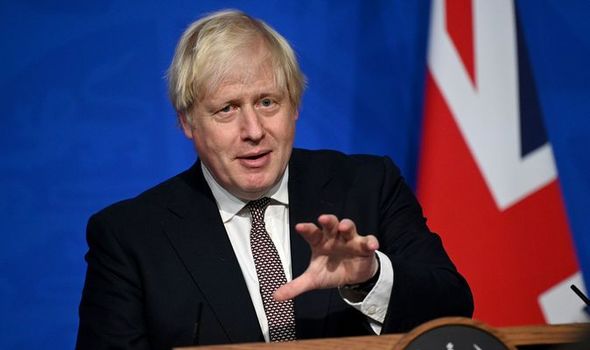 A disastrous fortnight for the Prime Minister has seen him on the back foot since the Owen Paterson debacle, about which he admitted: “On a clear road I crashed the car into a ditch.” He is also facing demands he deal with the migrant crisis, while Labour has branded changes to HS2, which saw the high speed eastern leg to Leeds scrapped, as a betrayal of the North.

But Tory MPs in Red Wall seats – the traditional Labour strongholds that voted Conservative in 2019 – say Mr Johnson remains a strength on the doorsteps and is the best person to lead the party into the next election. And prominent members of the 2019 Tory intake acknowledge they owe their election victories to his party leadership.

Mark Fletcher, who turned Dennis Skinner’s Bolsover seat from red to blue, said: “The PM is a brilliant politician and leader. His optimism and vision for where the country is going remains undiminished.” Lia Nici, the first Conservative to win Great Grimsby since the Second World War, also wants Mr Johnson to stay in post. She said: “Boris is absolutely the right man to lead the country now and through the next election cycle.”

Ashfield Conservative MP Lee Anderson had blunt advice for his colleagues: “If he does make a few blunders, make a few mistakes, you should remember that we’re in Parliament because of him.” However, there is agreement the Prime Minister needs to tackle illegal immigration to address the concern of voters in the former Labour heartlands.

Mr Johnson has signalled he shares their frustration by ordering a cross-Whitehall review of the migrant situation. It is reported he is “exasperated” that the Government has not been able to bring down numbers – and at the lack of viable policies to stop people crossing the Channel in small boats. Nearly 25,000 have made the crossing this year – around three times as many as last year.

Marco Longhi – who in 2019 became Dudley North’s first Conservative MP – said Mr Johnson commanded his “full support” and that his constituents want him to stay. But he urged the Government to show them that the country has truly taken back control of its borders and its laws. He said: “Unquestionably, the most visible expression of our failure in delivering that to date is the unrelenting arrival of illegal immigrants who subsequently claim asylum.”

Brendan Clarke-Smith, who took Basset-law from Labour, expressed confidence in both Mr Johnson’s enduring power at the ballot box and his ability to get a grip on illegal immigration. He said: “[He] is still incredibly popular on the doorstep. People had faith in him to get Brexit done. I think the Prime Minister is the right man to see us through on [immigration] and, again, I hope he’s still here for the next election because he’s got that winning formula. He’s a winner.”

Mr Johnson expressed regret last week over his handling of the Owen Paterson disaster. It saw a botched attempt to spare the former environment secretary from punishment for breaking lobbying rules. But Matt Vickers, who won Stockton South for the Tories in 2019, insisted the PM had “got his mojo back” and said the country is now in a much better state than people had dared hope when Covid-19 first hit.

He said: “He’s firing on all cylinders. The one thing that happened at the beginning of this pandemic is everybody thought we’d get to the other end of it and there’d be mass unemployment. Here we are, jobs vacancies galore, an economy booming. We’re building back better. He is going to be a huge asset in the next election as he was in the last [because] he’s done such a fantastic job of steering us through the pandemic. We’re seeing more bobbies on the beat, we’re seeing more doctors and nurses in our hospitals and, in Stockton South, we’re seeing lots of cash investment.”

A fellow MP from the 2019 intake also insisted the PM remains a “huge electoral asset” and said there was no appetite to replace Mr Johnson with Chancellor Rishi Sunak, who has won plaudits for his delivery of the furlough scheme. They said: “Some people I’ve spoken to in the constituency said Boris needs to get his act together. But nobody has said to me, ‘Now’s the time for a new prime minister’.”

However, another first-term MP expressed concern about the PM’s performance, saying: “I think there are a few starting to question [it]. I think a recurring theme for the last couple of weeks is [it’s been] a ****show.” They added: “I’d like to see the Boris we had in the election – bombastic, the entertainer, serious when he needs to be.”

Meanwhile, Shipley Conservative Philip Davies was confident the PM “absolutely” remained an asset and is sure he will remain in post, but he argues the party needs “to start governing as Conservatives”. He said: “There’s no point having an 80-seat majority in Parliament and then doing exactly what the Labour party would have done.”

IT is not at all surprising to see such strong loyalty to Boris Johnson among the Conservative MPs who smashed down the Labour Red Wall in December 2019. A big reason for that is the Prime Minister is still popular with their voters when they go door knocking. The issues around alleged sleaze which fascinate the Westminster bubble and the chattering classes are not getting the same traction elsewhere.

The Red Wall MPs understand that Mr Johnson is one of those rare political beasts who cuts through with the public and has a charisma and aura about him which wins over voters. But their support and that of their constituents to him is not unconditional, especially as those voters, in many cases, are new to the Conservative Party.

So while commentators have been railing against a betrayal last week on cancelling a section of the eye-wateringly expensive HS2, many of the Red Wall MPs do not see it as a betrayal of the North and actually welcome the decision, with money being better spent on levelling up elsewhere. Instead, their concerns are over a green agenda which seems to many to be out of control and is going to cost their constituents a small fortune in new boilers and electric cars.

But most of all is the apparent inability of this Government even after Brexit to tackle illegal immigration which, after the Liverpool bomb, is firmly attached to the return of a severe terror threat. The same MPs held their noses to support lockdown measures and were sickened by the Government’s tax rises even though they did not openly rebel. Meanwhile, parties on the right, mainly Richard Tice’s Reform Party, plan to stand in every constituency on a much more conservative agenda.

The MPs’ fear is that if Reform or Laurence Fox’s Reclaim Party get traction with voters then a split vote on the right could hand back the Red Wall to Labour. For now the Red Wall MPs remain and many of their voters are loyal, but if the Prime Minister becomes another symbol of the metropolitan elite and doesn’t bring the change to issues such as immigration which were promised in 2019, then that support might not hold.