Home » Politics » 4,000 People Died From COVID-19 While The RNC Pretended The Pandemic Is Over

4,000 People Died From COVID-19 While The RNC Pretended The Pandemic Is Over

The novel coronavirus pandemic claimed another 1,116 American lives on Thursday, as Republicans brought a close to a national convention most notable for their repeated insistence that the pandemic is a thing of the past.

For four nights, the GOP largely ignored that a virus most other countries have brought under control is still spreading across the United States rapidly, as if a modest decline from July’s peak in daily case numbers is a reason to celebrate and the deaths of more than 180,000 people here are nothing to mourn.

Across the country, at least 4,024 Americans died from COVID-19 during the four-day Republican National Convention this week, according to Johns Hopkins University. The total number of deaths rose from 176,800 on Sunday, the day before the convention opened, to 180,824 by the time it ended. Put another way: The U.S. lost more lives to COVID-19 during the RNC than it did in the 9/11 terrorist attacks. The number of deaths in the United States over that period exceeded the number of new infections in Canada.

President Donald Trump and the GOP, however, acted as if the fight against the virus is over and that he can be credited with winning it. 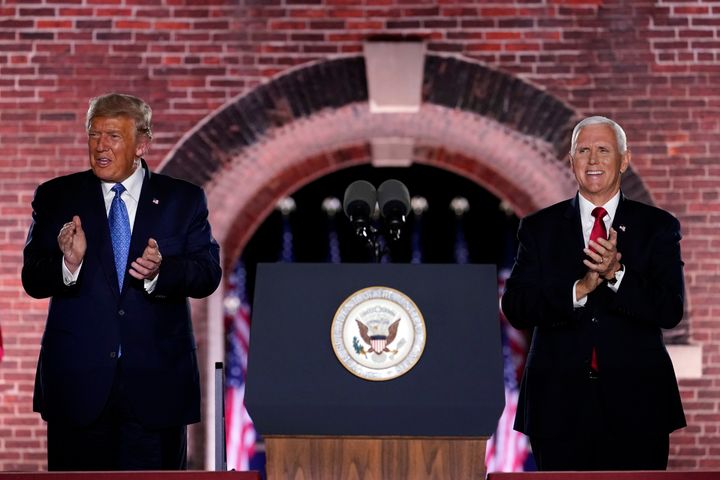 “These are the incredible workers that helped us so much with the COVID,” Trump said during a Monday speech from the White House, where he stood flanked by police officers, nurses and a truck driver.

His use of the past tense, which would become a theme throughout the convention, was quickly drowned out by his reference to “the China virus,” the racist term he has repeatedly used to shuttle blame for the global pandemic on the country where it originated.

“It was awful,” White House economic adviser Larry Kudlow said Tuesday night of the pandemic. “Health and economic impacts were tragic. Hardship and heartbreak were everywhere. But presidential leadership came swiftly and effectively with an extraordinary rescue for health and safety to successfully fight the COVID virus.”

Vice President Mike Pence took up the cause on the convention’s third night, using a Wednesday speech he delivered from Ft. McHenry in Baltimore to liken the pandemic to the battle that inspired The Star-Spangled Banner.

“If you look through the fog of these challenging times you will see our flag is still there,” Pence said. “Thanks to the courage and compassion of the American people, we are slowing the spread, we’re protecting the vulnerable, and we’re saving lives.”

Republicans repeatedly scoffed at the idea that safety precautions like school and business closures are still necessary, or that the nation should listen to experts. “We are not ― and will not ― be the subjects of an elite class of so-called experts,” said South Dakota Gov. Kristi Noem (R), who recently welcomed the massive Sturgis Motorcycle Rally into her state that is linked to more than 100 COVID-19 cases, a number destined to rise.

“If the Democrats had their way, they would keep you locked in your house until you become dependent on the government for everything,” Sen. Marsha Blackburn (R-Tenn.) said Wednesday evening.

Democrats “want to tell you when you can go to work, when your kids can go to school,” Senate Majority Leader Mitch McConnell (R-Ky.) said Thursday night.

The GOP’s insistence that the pandemic has been conquered ― or barely mattered at all ― went beyond its lack of acknowledgment or mourning of the dead.

Lara Trump, a Trump campaign adviser who is married to the president’s son Eric, bragged on Wednesday that “4.3 million new jobs have been created for women” since Trump took office. While that was true before the virus ravaged the U.S. economy, women are now 3 million jobs in the red, as CNN reporter Daniel Dale noted.

The country’s coronavirus outbreak is no longer raging as it was in late July, when the United States was responsible for nearly a quarter of the world’s new cases each day.

But outside the world the GOP constructed at its convention, the situation is still dire. The United States leads the world in overall COVID-19 infections and total deaths. Just 10 countries have a higher rate of deaths per capita, data from Stat News shows.

The number of cases is still rising in at least 10 states and U.S. territories, according to The New York Times, and colleges and universities nationwide have experienced outbreaks after bringing students back to campuses this month. Some have halted classes in an attempt to control the spread, while elementary, middle and high schools have experienced similar problems as students have returned.

On the convention’s final night, more than 1,000 people gathered close together on the South Lawn of the White House, hardly a mask in sight, as if a global pandemic wasn’t still ravaging the country.

Trump finally acknowledged Thursday night that the fight against the virus is ongoing, although it was primarily meant to glorify his own efforts to “crush” a virus most other large nations have already halted.

“We are meeting this challenge,” Trump said. “We are delivering life-saving therapies. And we will produce a vaccine before the end of the year, or maybe even sooner. We will defeat the virus and the pandemic and emerge stronger than ever before.”