But the police union has blasted the action as a “politically motivated witch hunt.”

All three officers were booked into jail Thursday evening.

No charges were announced for two other officers who were under investigation, the report said.

Ellis died March 3, 2020, after he was restrained by officers on a Tacoma street. Ellis was returning home from a late-night snack run when police stopped him for allegedly trying to get in a car someone else was driving.

The officers claimed Ellis had been aggressive, punching the window of their cruiser and attacking them as they got out of the car, forcing them to put him in a chokehold and place a spit hood over his head.

But video taken by two witnesses seemed to contradict the officers’ narrative, showing the officers to be the aggressors.

“I can’t breathe, sir,” Ellis can be heard on a security camera saying to an officer after he was placed in the chokehold. Those words would later become a refrain for police reform advocates after they were uttered by George Floyd in May 2020 before Floyd died at the hands of a Minneapolis police officer later convicted of his murder.

“Shut the (expletive) up, man,” one of the officers can be heard replying to Ellis’ pleas. 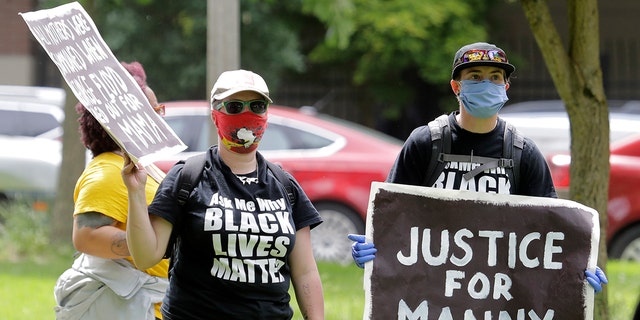 A protester holds a sign that reads "Justice for Manny" in this June 5, 2020 file photo in Tacoma, Wash., during a protest against police brutality. (Associated Press)

The Tacoma Police Union was highly critical of the charges in a statement.

“We are disappointed the facts were ignored in favor of what appears to be a politically motivated witch hunt,” it said. “An unbiased jury will not allow these fine public servants to be sacrificed at the altar of public sentiment.”

“The facts were ignored in favor of what appears to be a politically motivated witch hunt. An unbiased jury will not allow these fine public servants to be sacrificed at the altar of public sentiment.”

The Pierce County medical examiner called Ellis’ death a homicide and attributed it to lack of oxygen from being restrained, with heart problems and methamphetamine as contributing factors. He was also hogtied, handcuffed and hit with a stun gun.

Ellis had a history of addiction and mental illness, including schizophrenia, authorities have said.

In September 2019, he was found naked after trying to rob a fast-food restaurant. A sheriff’s deputy subdued him with a stun gun after he allegedly refused to remain on the ground and charged toward law enforcement.

But the landlord at the sober house where Ellis had been living said he had been doing well prior to the March 2020 incident for which the three officers have been charged.

“Ellis was not fighting back,” the probable cause statement said. “All three civilian witnesses at the intersection … state that they never saw Ellis strike at the officers.”

Witnesses reported seeing Burbank and Collins, who are both White, attack Ellis without provocation, according to the statement. Rankine, who is described as being of Asian descent in court documents, is accused of putting pressure on Ellis’ back as he said he couldn’t breathe. Ellis did appear to resist officers at times, according to the statement.

Two witnesses at the scene told the same story: One of the officers slammed the passenger door of the patrol car into Ellis, knocking him down, and then jumped on him and started beating him.

It is the first time the state’s attorney general’s office has criminally charged officers for deadly use of force, Ferguson said, according to Q13.

Ellis’ mother, Marcia Carter-Patterson, claimed her son was “used as a sacrifice.”

“He didn’t have to be murdered,” she said at a news conference, Q13 reported. She added she believed God had chosen her son to expose corruption in the police force and the local government.

“The criminal system needs to be made over, from the head — just take it all off,” she cried.

“My heart is heavy,” she added. “All of my children love me and I love them,” Her two living children, a son and daughter, were by her side.

She added she will “never, ever give up” the effort to stop police brutality.

Washington Gov. Jay Inslee, a Democrat, said the charges were “the first step in our system of justice” in a statement, according to Q13. “We must remain proactive – from those of us in elected office to those providing services in our communities – to turn the tide of injustice.”

The Washington State Patrol took over the investigation three months in after it was disclosed that an officer from the Pierce County Sheriff’s Office, the investigating agency, had an officer involved in the incident.

The state’s Attorney General’s Office conducted its review based on evidence gathered by the state patrol as well as its own additional investigation.

Five officers involved in the incident were placed on administrative leave and Ferguson said the investigation was continuing.