Home » Markets » Why the 'billionaires beat' is becoming more important

Why the 'billionaires beat' is becoming more important

What’s happening: The Virgin Galactic (SPCE) founder’s flight over the weekend aboard a spacecraft he helped fund was a landmark moment for the commercial space industry. The up-and-coming sector has for years been looking to make space tourism a viable business.
That moment has yet to arrive. But Branson’s journey sent Virgin Galactic’s stock up more than 7% in premarket trading on Monday. Shares had already skyrocketed 107% year-to-date, valuing the company at nearly $12 billion.

Shares plunged in early trading after Virgin Galactic said it would sell up to $500 million in shares.

Still, in a note to clients last week, Cowen analysts said they were bullish on the company, citing its test flight schedule and regulatory approvals. Virgin said it would use money from its stock sale to develop its spaceship fleet, along with other “general corporate purposes.”

With Branson’s journey in the books, Cowen said it was “more positive about the prospects of a successful commercial spaceflight program in 2022,” noting that the company’s “visibility, marketing programs [and] ticket sales should support [its] valuation,” even though it remains unprofitable.
Gut check: In the first three months of 2020, Virgin Galactic booked a net loss of $130 million, up from $74 million during the previous quarter.
But space stocks are becoming increasingly popular, especially among everyday investors. According to Vanda Research, Virgin Galactic is currently the fourth most bought stock among retail investors. Additional hype may be drummed up by Amazon CEO Jeff Bezos, who plans to make his own trip to space on July 20 aboard a rocket ship made by his company Blue Origin, which is private.
Space infrastructure stocks could be primed for a rally, too. Last month, Goldman Sachs initiated coverage of Maxar Technologies, which specializes in high-resolution Earth imagery, with a “buy” rating. Shares are down more than 7% this year to $35.67, but Goldman thinks they could hit $52 over the next 12 months.
“Earth observation data and analytics are increasingly prioritized by government and commercial customers,” analyst Noah Poponak said. “New competitors are coming to this market but we think they are far behind [Maxar].”
Meanwhile, money is flowing into the industry. According to data from PitchBook, there are now at least eight space tech companies that have completed or are planning to go public by merging with “blank check” companies. That’s the route Virgin Galactic took to go public in 2019.
Space tech startups raised $5.5 billion in VC funding last year. Per PitchBook, that was a record — and 2021 is on track to surpass it.

Beijing is broadening its control over the tech sector after Didi’s disastrous public offering in New York, as the path for Chinese firms to raise money abroad narrows.
The latest: This weekend, the country’s powerful internet watchdog proposed that any company with data on more than 1 million users must seek approval before listing its shares overseas. Companies could also be compelled to submit financial materials for review in advance of an offering, my CNN Business colleague Laura He reports. 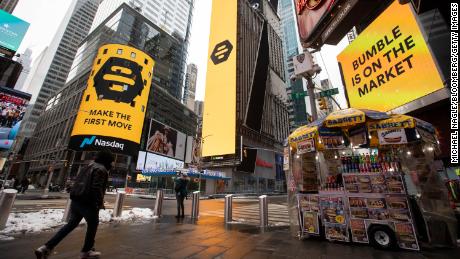 The Cyberspace Administration of China cited concerns about whether data and personal information held by companies trying to list overseas could be “affected, controlled or maliciously exploited by foreign governments.” The agency said it will seek “public opinion” on the draft rules before they’re formally adopted.
Step back: The rules are the latest move in China’s expanding crackdown on tech firms, which has ramped up in the wake of ride hailing service Didi’s botched listing on the New York Stock Exchange late last month.
Didi’s initial public offering raised $4.4 billion, marking the biggest US IPO by a Chinese company since 2014. But the firm’s share price collapsed last week after China announced it would ban Didi from app stores in the country, claiming it poses cybersecurity risks and broke privacy laws.
The CAC on Friday punished Didi even further, banning 25 of the company’s other apps, accusing them of violating laws around collecting and using personal information. Didi said Saturday that it would comply with the regulator’s requirements and “rectify its problems.”
Investor insight: Didi’s stock clawed back some of its recent losses in New York on Friday, closing at about $12 per share. Even so, that’s below its IPO price of $14 — the equivalent of about $9.6 billion in lost market value.
Didi isn’t the only stock to come under pressure. Over the weekend, the State Administration of Market Regulation blocked Tencent’s plan to merge two of China’s top video game streaming websites, Huya and Douyu. Tencent’s shares declined 2% on Monday in Hong Kong, adding to the losses that have been mounting for months.
Watch this space: The Wall Street Journal also reports Monday that TikTok owner ByteDance shelved plans to pursue a public offering earlier this year after regulators warned it needed to address data security risks.

Goldman Sachs was wrong about the Euros

The outcome of Sunday’s Euro 2020 final was bad news for long-suffering fans of England’s soccer team — and for the strategists at Goldman Sachs who had been making predictions for the tournament.
The investment bank forecast that England had a 58% chance of defeating Italy. That would have been the nation’s first victory in a major tournament in 55 years.
Per the Goldman Sachs model, the Three Lions were expected to notch a 2-1 win in extra time. Instead, the team lost to Italy on penalties.
Track record: The European economics team originally forecast that Belgium would win the tournament. Italy defeated Belgium in the quarterfinals. Goldman also incorrectly picked Spain to defeat Italy in the semifinals.
Better luck next time to both England and those running the numbers on Wall Street.