Home » Markets » What is SWIFT, and why does the West fear cutting Russia off from the world’s banks?

What is SWIFT, and why does the West fear cutting Russia off from the world’s banks?

Russia’s invasion of Ukraine is putting the spotlight on an obscure part of the banking system that could act as a major financial weapon.

Vladimir Putin’s decision to launch an invasion of Ukraine has sparked global debate about whether Russia should be expelled from a once obscure part of the global banking system, known as SWIFT.

While Ukraine’s Foreign Minister, Dmytro Kuleba, has made angry calls for Russia to be banned from SWIFT, world leaders appear to be divided, for now.

British Prime Minister Boris Johnson pushed for Russia to be kicked off the global payment network on a call for Group of Seven (G7) leaders. And Australia’s Prime Minister, Scott Morrison, has strongly backed such a move, saying it is “all about ensuring they get cut off, and that is the price that is paid”.

But US President Joe Biden has so far been lukewarm on the idea, saying sanctions on Russian banks this week would be just as effective; and German Chancellor Olaf Scholz thinks the world should hold off. “We need to keep sanctions ready for later times.”

Those pushing for Russia’s removal from SWIFT argue it would deal a major economic blow to Putin and Russia. But what exactly is SWIFT, and why is a ban from the network seen as such a serious penalty?

The Society for Worldwide Interbank Financial Telecommunication (SWIFT) is a vital piece of the plumbing that connects the world’s banks. It is a messaging system that allows banks to move money quickly and securely, supporting trillions of dollars in flows of trade and investment.

Based in Belgium, the company is a co-operative owned by financial institutions from around the world, which was founded in 1973 to replace the telex network (a network of teleprinter machines that sent messages). SWIFT says it connects more than 11,000 banks and other corporations from more than 200 countries.

Normally, payment infrastructure is one of the most unsexy parts of finance. It’s something few of us notice or care about unless it messes up. However, SWIFT is making news because it could be a powerful financial weapon to use against Russia over its invasion of Ukraine.

It is seen as a particularly tough financial penalty because it sits at the heart of the banking system: restricting Russian banks’ access to global money flows would make it much harder for Russian businesses to export or import, or to finance themselves from overseas.

But as the Prime Minister Morrison pointed out today, any ban on Russia would have to occur “with countries all around the world.” “That is something that particularly needs the involvement of the United States because of [the US] currency in supporting in that system.” 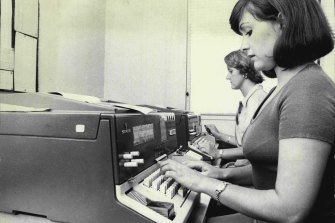 A telex machine, which SWIFT replaced, in 1976.Credit:Fairfax Media

Why the hesitation in kicking out Russia then?

One reason some European nations are wary is because cutting Russia out of the world banking system may well come at a cost to their own economies. The European Commission says Russia is the EU’s fifth-largest trading partner (the EU’s biggest goods exports to Russia in 2020 were machinery and transport equipment, chemicals, and manufactured goods). A SWIFT ban could make all of this more expensive and difficult.

It’s also possible Russia could find ways to get around a SWIFT ban, although it’s unclear how effective these would be. Russia’s central bank has developed its own alternative to SWIFT called the System for Transfer of Financial Messages, although it is nowhere near as large as the SWIFT network – the Bank of Russia’s website says its system is used by about 400 banks.

There are also fears about the potential role that could be played by cryptocurrencies to get around any sanctions, at a time when Western central banks are already wary about the rise of crypto assets as an alternative to government-backed money.

There is a precedent for SWIFT kicking out some banks: in 2012 it expelled Iranian banks sanctioned by the European Union. It reconnected many of the banks in 2016 after the sanctions were lifted.

A spokesman for SWIFT highlighted its neutrality, and said it had been set up for the “collective benefit of its community of more than 11,000 institutions in 200 countries”. “Any decision to impose sanctions on countries or individual entities rests solely with the competent government bodies and applicable legislators,” the spokesman said.

What other actions could world leaders take?

Diplomacy has clearly failed to prevent a military conflict. Western nations have made it clear they will not send in troops but they are offering military support such as providing arms and other equipment.

Members of NATO are also beefing up their security presence, with the US sending in more troops to Germany, for example. Australia will supply non-lethal military equipment and medical supplies to help Ukraine via NATO channels. But there is a gamut of other responses too.

So far, many of the weapons have been economic. There have been trade sanctions, curbs on the overseas activities of Russian banks, and bans on trading in Russian government bonds. Russian companies have also been banned from borrowing money in the UK’s markets. Germany has stopped certification of the Nord Stream 2 gas pipeline, which had been key to Moscow’s plans to increase energy sales to Europe.

Russian individuals, including parliamentarians and billionaires close to Putin, are being targeted with travel bans, asset-freezing orders and other curbs.

The EU and the United States are also seeking to restrict Russia’s access to technology, including to semi-conductors, computers, lasers and sensors used by its military.

The hope is that this ratcheting up of pressure will ultimately inflict a painful economic cost on Russia and act as a deterrent to further military action.