Banking giant Westpac has decided it will not offload its New Zealand unit, after a review found it made sense for shareholders to hold onto the Kiwi business.

In March, it was leaked to the media that the bank had appointed investment bankers to consider whether it would make sense to demerge the Kiwi business, which has been facing tougher capital requirements from regulators. 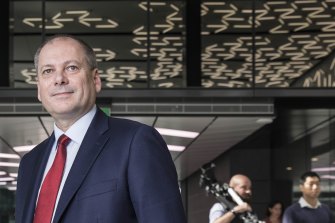 Westpac chief executive Peter King said demerging the NZ business was not in the interests of shareholders.Credit:Jessica Hromas

Such a demerger deal would have created a separate business worth about $10 billion, analysts said at the time, while Westpac would have lost the roughly 15 per cent of its profits that come from across the Tasman.

However, on Thursday chief executive Peter King said the bank would aim to improve the performance of the business, named Westpac New Zealand Limited (WNZL), rather than demerge it.

“After a detailed review, we believe a demerger of the WNZL business would not be in the best interests of shareholders,” Mr King said in a statement.

“Our review identified opportunities to improve service for customers and value across the WNZL business and we will progress these with the WNZL Board and management team.”

Westpac has been in New Zealand for 160 years, and analysts say the Kiwi businesses of the big four generally produce good returns, despite capital requirements increasing across the Tasman.

“We remain committed to delivering for customers and fulfilling our purpose of helping Australians and New Zealanders succeed,” Mr King said.

Evans and Partners analyst Matthew Wilson said the prospect of Westpac quitting NZ was little more than a “thought bubble” at the time it became public in late March, as the issue had been leaked prematurely. Mr Wilson backed the bank’s decision to remain in NZ, highlighting the high return on equity (ROE) enjoyed by Australian banks in the market.

“NZ is a good place to bank with mid double digit RoEs, strong connections to Australia and an industry structure where 90 per cent of the market is banked by the four majors,” Mr Wilson wrote.

Westpac’s consideration of a NZ exit comes after the Reserve Bank of New Zealand has ratcheted up capital requirements for the big four in recent years, a change that analysts have predicted will drag on returns.

The top short-term priority for Westpac’s NZ business is to find a new chief executive to replace outgoing country head David McLean, who will retire at the end of this week, with Simon Power to act in the role until a long-term replacement is hired.