London (CNN Business)For months, investors have been bracing for signs that prices will increase as the post-pandemic economic recovery gathers steam.

Well, they’re here.
What’s happening: Consumer products giant Procter & Gamble (PG) has said it will raise prices on brands such as Pampers diapers and Tampax tampons. The increases will vary by brand, but will be in the mid-to-high single digit percentage range. They will go into effect in mid-September. 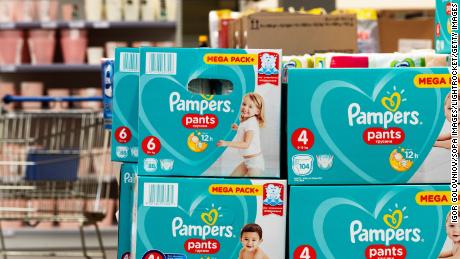 That would be reflected in inflation data, which is closely monitored by policymakers. Wall Street has been worried that rising prices could put pressure on central banks to pull back economic support sooner than expected. Hiking interest rates can help fight inflation.

Not just Pampers: P&G’s move follows planned price hikes from rival Kimberly-Clark (KMB), which will raise prices on Huggies, Pull-Ups and Scott toilet paper in North America in June in response to rising commodity costs.
Expenses are rising for many retail and consumer goods companies as a result of increased demand and pressure on global supply chains.
General Mills (GIS), which makes cereals such as Cheerios, said last month that it was facing increased freight and supply chain costs.
“There are higher costs to operate in this higher demand environment,” CFO Kofi Bruce said on a call with analysts.
Higher costs aren’t just an US phenomenon. UK inflation hit 0.7% in March, according to data released Wednesday, driven by rises in the price of oil and clothing.
For now, there’s a sense that central bank leaders will be able to look past the upward trend.
“The rebound … is the start of a rise that we think will take inflation to around 1.5% in the next few months and above 2% by December. But as we doubt inflation will stick above 2% until late in 2023, the Bank of England is unlikely to hike interest rates for a few years yet,” Paul Dales, chief UK economist at Capital Economics, told clients Wednesday.
Watch this space: The yield on the benchmark 10-year US Treasury note was last at 1.57%, after rising to near 1.75% in late March. That’s a signal that Wall Street’s inflation fears have subsided slightly. Similarly, while the yield on Britain’s 10-year bond increased to 0.75% on Wednesday, it’s still below levels reached last month.
Expect investors to closely monitor the bond market for signs of duress in the coming months — especially as price hikes keep feeding through.

Netflix is under pressure as rivals gain strength

Netflix (NFLX) had a huge start to 2020 as the pandemic forced people to hunt for ways to stay entertained from home. But as vaccinations ramp up, the streaming service is starting to lose steam. 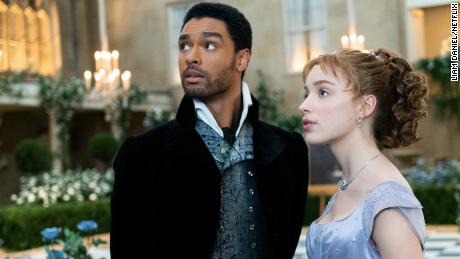 The latest: The company said after markets closed on Tuesday that it now has 208 million subscribers globally after adding 4 million subscribers in the first quarter of the year. That’s below its own expectation of 210 million, my CNN Business colleague Frank Pallotta reports.
Netflix’s first quarter profit this year was $1.7 billion, up from $709 million in the year-earlier quarter. Its revenue jumped 24% to $7.1 billion.
In short: The company’s earnings were good, but all eyes were on its big subscriber miss — as well as a weak forecast for subscriber growth for the next quarter. Shares are down 8% in premarket trading.
According to Netflix, the company did so well last year that it was hard for this quarter to compare.
“We believe paid membership growth slowed due to the big Covid-19 pull forward in 2020,” Netflix said in its letter to investors. It also cited “a lighter content slate in the first half of this year” due to pandemic-related production delays.
That’s not all: Competition is also growing. In the last year, the marketplace has gotten crowded. New services like NBCUniversal’s Peacock and CNN parent WarnerMedia’s HBO Max have launched, while Disney+ has become more dominant.
Netflix said it competes with “many activities for consumers’ entertainment time,” but believes the market is big enough for it to keep growing.
“We’re working as hard as ever to continually improve our service so that we are the best entertainment option available,” the company said.

Breakaway European Super League was all about big money

Plans for a dozen of Europe’s top soccer clubs to form a breakaway league produced howls of indignation from the sport’s governing bodies, the elected leaders of France and Britain, and legions of their own fans.
The backlash was so severe that the project has collapsed. Less than 48 hours after the formation of a new European Super League was announced, all six English clubs said they would withdraw from the controversial competition. Juventus chairman Andrea Agnelli said in an interview with Reuters that the planned European Super League can no longer go ahead.
So why make such an unpopular move in the first place? Money, of course.
The founding clubs would be permanent members of the ESL, a structure that resembles Major League Baseball or the National Football League and promises eye-popping paydays from media rights and merchandising, my CNN Business colleague Charles Riley reports.
But it runs counter to the traditions of European football, with its roots in industrial working class neighborhoods, where even the poorest clubs are promoted to top leagues if they win and no amount of money can protect rich teams from relegation if they lose.
What’s next: The economic incentives that drove the project are still in place, with millions of dollars a year from selling the broadcast rights to matches on the line. For now, though, the idea is dead in the water — sending shares of Manchester United (MANU) down 6% in New York on Tuesday. Juventus (JVTSF)‘ stock fell 12% in Milan on Wednesday.