In a blogpost on Tuesday, the co-founder of quantitative investing hedge fund AQR Capital Management, assessed the attractiveness of the U.S. 10-year Treasury note by looking at its inflation-adjusted yield and the yield curve’s slope as measured by the yield difference between the 3-month bill and the 10-year note.

Asness found that when he averaged the two measures, both used to gauge the valuations of the long-term bond, this composite gauge indicated the 10-year yield was at its most expensive level since some months in the late 1970s. 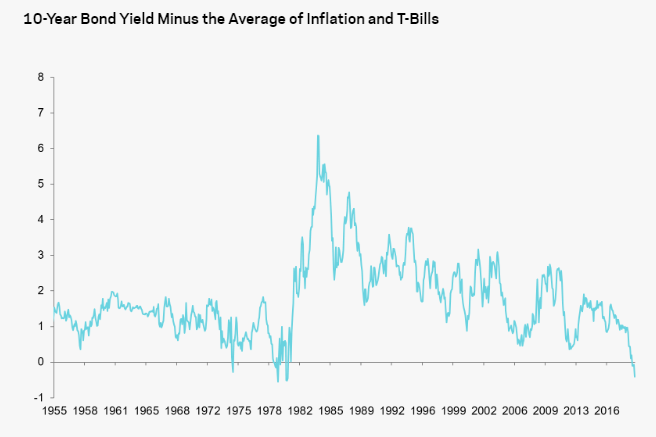 See: Bonds meet these four criteria for being in a bubble

The 10-year Treasury note yieldTMUBMUSD10Y, +3.21%  traded at 1.688% on Friday, around its lowest levels since October 2016. The benchmark bond yield has given up around a single percentage point since the start of the year.

But the hedge fund manager doesn’t see the current level of bonds yields as an excuse to time the market and short Treasurys, but rather to illustrate the simply eye-watering prices U.S. government debt is now fetching.

“When something as important as the U.S. bond yield hits historical extremes, it’s worth at least a discussion, though certainly not an automatic huge short,” said Asness.

He points out Japanese bonds were expensive by several metrics for a long time. Yet shorting Japanese government debt in expectation that their ultra-low yields were unlikely to last has ended up as a “widow-maker” trade for hedge funds and other speculators willing to try their luck.

In addition, U.S. Treasury yields are “high versus some major parts of the world attempting to discover how negative a government guaranteed bond can yield before savers build private fortresses to store cash,” said Asness.