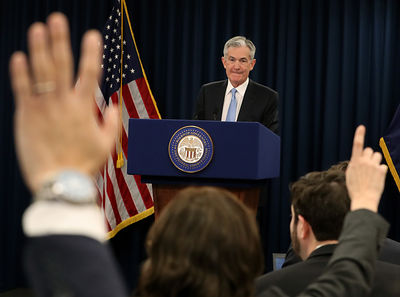 Even for a bond market bracing for an accommodative Federal Reserve, policy makers’ moves on Wednesday were a stunner, raising the specter of recession.

In particular, analysts said bond investors were taken aback by the sharp reduction of interest-rate-hike projections by the Federal Open Market Committee to zero from two back in December, as reflected in the central bank’s “dot plot” — a chart of Fed members’ projections for future rates.

On top of that, the Fed announced plans to end the runoff of its $4 trillion balance sheet in September and downgraded expectations for gross domestic product in 2019 to 2.1% from 2.3%.

Although the central bank held key rates at a range between 2.25% to 2.50%, as expected, the combination of other statements delivered a dovish jolt to fixed-income investors.

“This decision falls firmly on the dovish side of consensus as the about-face from ‘further gradual tightening’ has now reached a complete 180 degrees,” said Ian Lyngen, head of U.S. rates strategy at BMO Capital Markets, in a Wednesday note.

Lyngen said Tuesday’s rally in the bond market was justified by the Fed’s “dovish double-down,” referencing the decision by the FOMC in January to adopt a more patient policy after markets convulsed in late 2018.

Indeed, the market’s reaction to Fed policy maneuvers on Wednesday was sharp, with yields of all maturities falling briskly as investors picked up Treasury bonds.

The 10-year Treasury note yieldTMUBMUSD10Y, +0.00% fell to 2.52%, its lowest level in 15 months — only a few basis points away from the upper bound of the current fed-funds rate at 2.50%. Meanwhile, yields for the two-year noteTMUBMUSD02Y, +0.00% and the 30-year bond maturityTMUBMUSD30Y, +0.00% staged the biggest single-day drop in three months, according to Dow Jones Market Data.

The bond-market rally had the effect of flattening the slope of the so-called yield curve, reflecting the spread between short-dated and longer-dated bonds. Some read that narrowing gap as a sign that investors are expecting a more pronounced economic slowdown.

Now, trading on the fed-fund futures market reflects a 50-50 chance of a rate cut in 2019, from a roughly 37% chance of one, according to Tuesday data.

Wednesday’s moves were interpreted as a more pronounced reversal by the Fed, perhaps because just in December, the central bank was penciling in two rate increases in 2019, as per the dot plot. Recent statements raise new fears that the Fed is worried that growth woes swirling abroad may soon wash up on U.S. shores.

Most notably, the spread between the three-month billTMUBMUSD03M, +0.00% and 10-year Treasury note narrowed to 7 basis points. A so-called yield curve inversion, where the rate of longer-dated debt falls beneath its shorter-dated counterparts, is widely viewed as an accurate recession indicator, and the three-month and 10-year pair is the most closely followed by economists. That spread narrowed further Wednesday, standing a hair’s breadth from a full-blown inversion red flag.

“The Fed is showing sensitivity to global growth fears and to signs of financial market stress,” said James McCann, senior global economist at Aberdeen Standard Investments, in an interview with MarketWatch.

Other less-watched yield-curve pairings, including the gap between the one-year and seven-year note, inverted.

In an apparent attempt to mitigate recession anxieties, Fed Chairman Jerome Powell said the U.S. economy was in a “good place” and that he saw few reasons for the central bank to shift out of its patient stance, speaking at a news conference following the release of the Fed’s policy update.

However, those comments may not be sufficient to placate some investors.

Investors also pointed to other surprises. Though some had expected the central bank would reinvest the proceeds of the mortgage-backed securities runoff back into a broad range of Treasurys, few were willing to wager that the central bank was ready to announce these plans as soon as March.

“The balance sheet management program is very Treasury-friendly. Whether it is worth a 10-basis-point decline in yields is a different matter. But, it’s definitely the case traders were caught badly off guard by the sweep of the Fed’s changes. Not to mention, many did not anticipate this level of detail this afternoon,” wrote Jim Vogel, an interest-rate strategist at FTN Financial.

Opinion: What’s really at stake as the Federal Reserve unwinds its balance sheet

If Mnuchin’s worried about liquidity, here’s where it’s actually a problem