There are many reasons for investors to be nervous. President Trump threatened to impose tariffs on all Chinese imports and then attacked the Federal Reserve for hiking interest rates. At the same time, stocks are trading at valuations that haven’t been seen since the 2008 financial crisis and dotcom boom.

These negative factors have been offset by robust economic performance. Last Monday, retail sales data showed an in-line 0.5% gain in June along with a strong 1.3% revision in May. Lower oil prices over the past week could further spur consumer spending and unlock significant value. (See also: Q2 Earnings Poised for Best Growth Since 2010.)

Next week, traders will be keeping a close eye on existing home sales on July 23, new home sales on July 25 and GDP data on July 27. The market will also be paying attention to President Trump’s actions and any indications that the Federal Reserve will slow its interest rate policy. 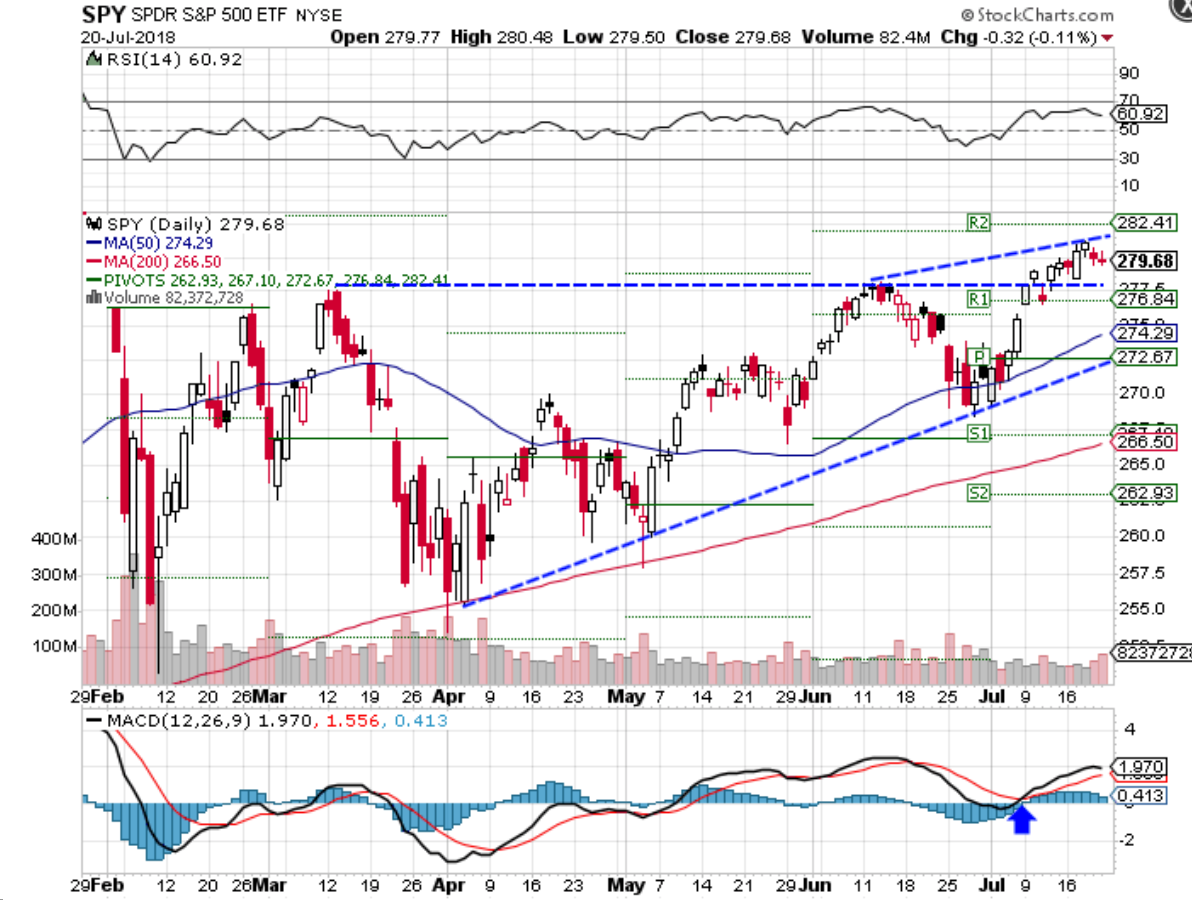 The SPDR S&P 500 ETF (SPY) broke out from trendline resistance at around $278.00 before giving up some ground by the end of the week. Traders should watch for a breakout to retest upper trendline and R2 resistance at $282.41 or a breakdown below trendline support to the 50-day moving average at $274.29 or lower trendline and pivot point support at $272.67. Looking at technical indicators, the relative strength index (RSI) appears neutral at 60.92, but the moving average convergence divergence (MACD) remains in a bullish uptrend.

[To learn more about supplemental technical indicators such as the RSI and the MACD, check out Chapter 4 of the Technical Analysis course on the Investopedia Academy.] 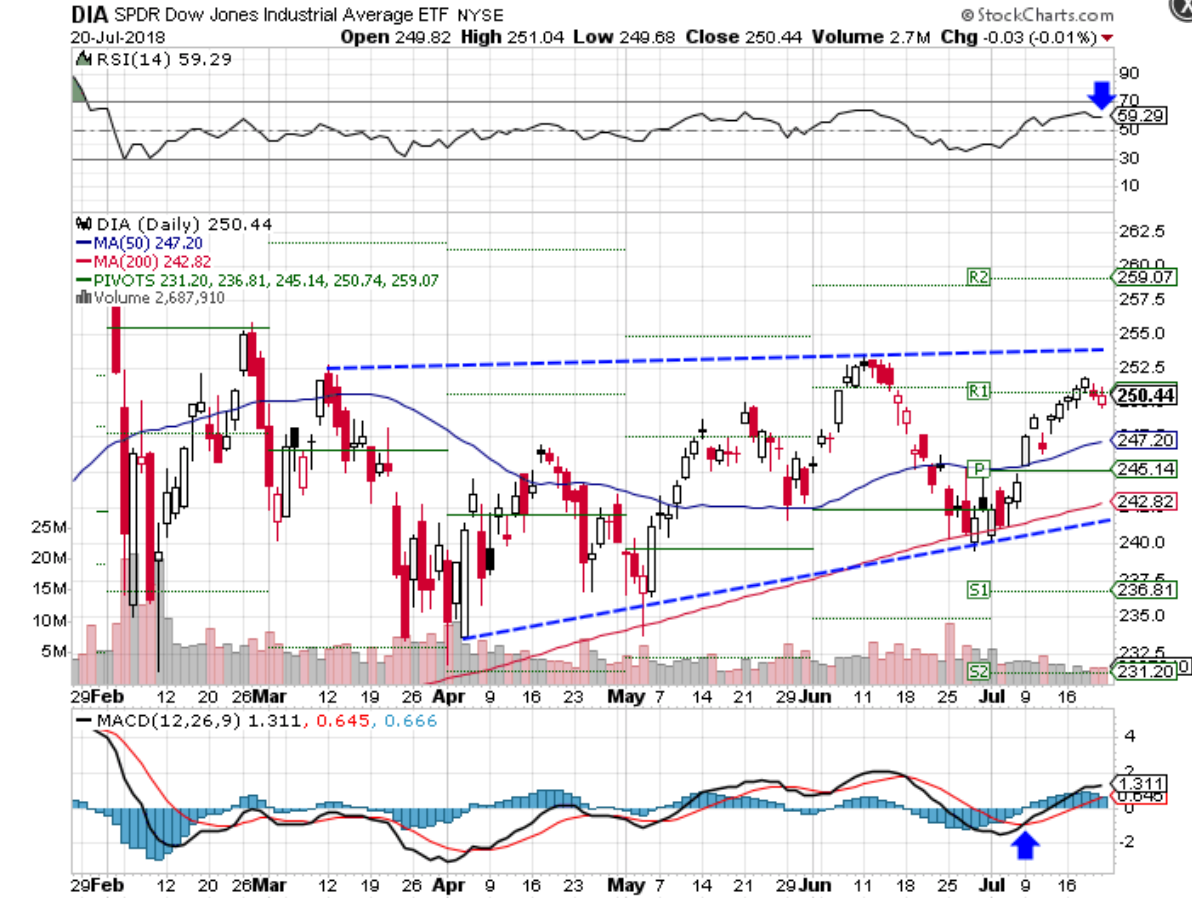 The SPDR Dow Jones Industrial Average ETF (DIA) briefly surpassed R1 resistance at $250.74 before moving marginally lower by the end of the session. Traders should watch for a breakout toward upper trendline resistance at around $253.00 or a breakdown to the 50-day moving average at $247.20 or the 200-day moving average and lower trendline support at around $241.00. Looking at technical indicators, the RSI appears neutral at 59.29, but the MACD is trending higher. (For more, see: The Sum of All Fears: 6 Big Concerns of Investors.) 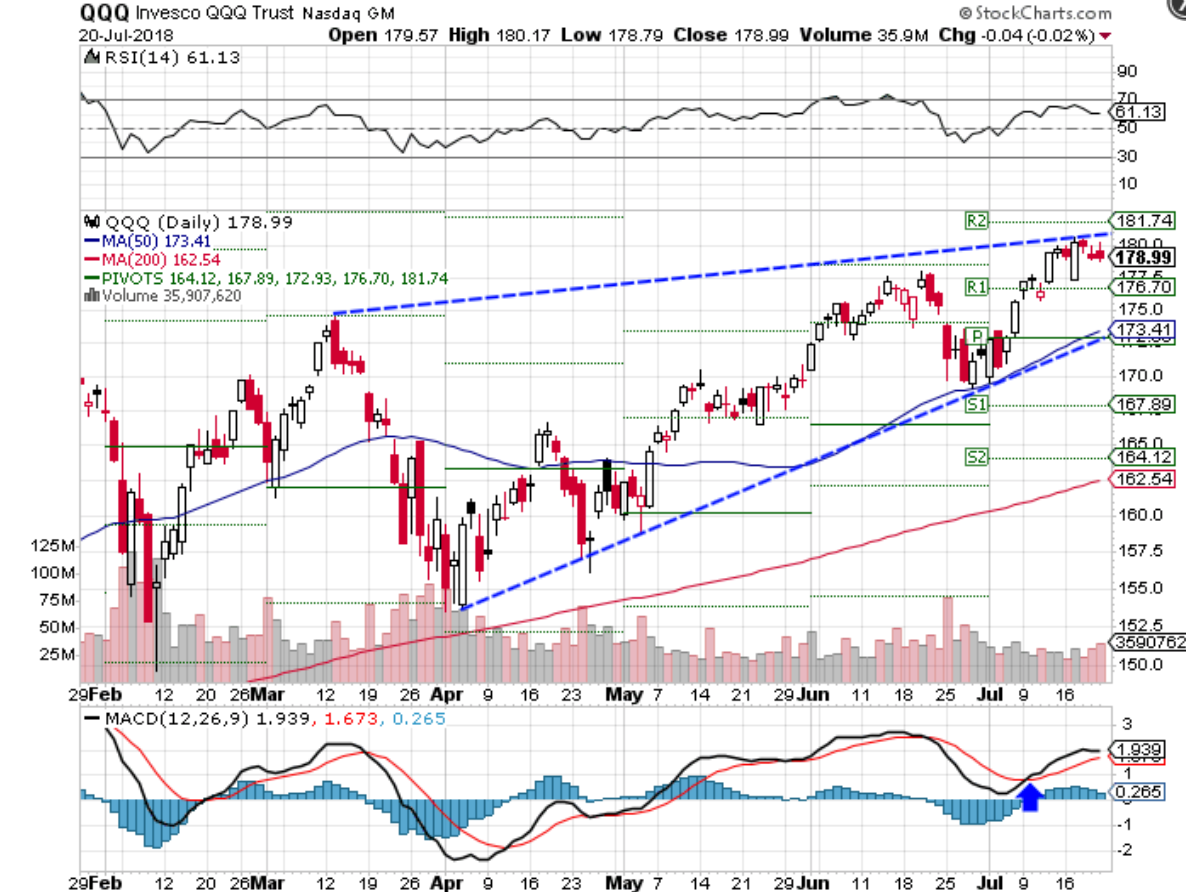 The Invesco QQQ Trust ETF (QQQ) broke out from R1 resistance at $176.70, past its prior highs made in June and to upper trendline resistance. Traders should watch for a breakout to R2 resistance at around $181.74 or a move lower below R1 support to lower trendline, 50-day moving average and pivot point support at around $173.00. Looking at technical indicators, the RSI appears neutral at 61.13, but the MACD remains in a bullish uptrend. 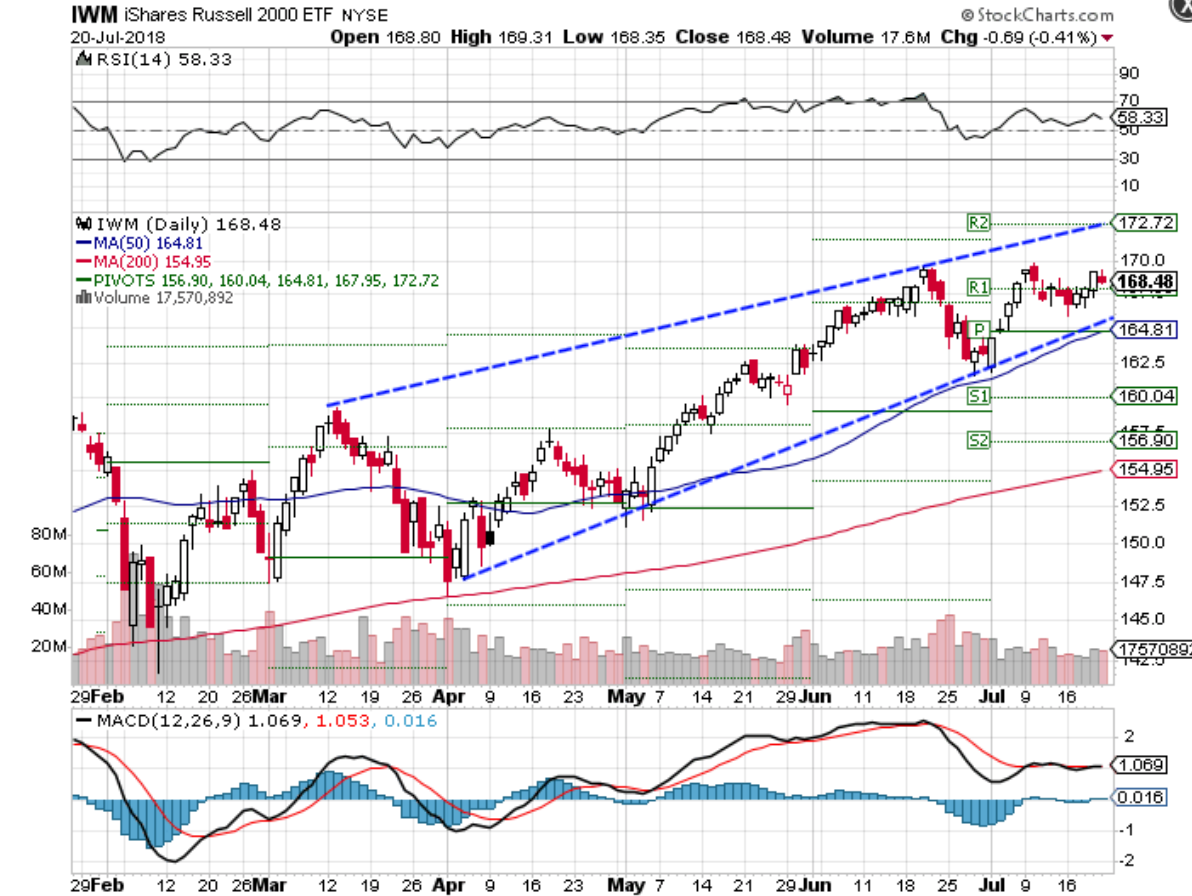 The iShares Russell 2000 ETF (IWM) has trended sideways around R1 resistance at around $167.95 over the past couple of weeks. Traders should watch for a breakout to upper trendline and R2 resistance at $172.72 or a breakdown toward lower trendline, 50-day moving average and pivot point support at around $165.00. Looking at technical indicators, the RSI appears neutral at 58.33, while the MACD has been trending sideways over the past month. (For additional reading, check out: Fund Managers Say Trade Biggest Risk: BofA.)

Charts courtesy of StockCharts.com. Author holds no position in the stock(s) mentioned except through passively managed index funds.