One of the stock market’s worst fears has been a trade war, yet U.S. large cap stocks have tagged on nearly 3 percent in the five sessions just before and after Friday’s trade actions, where the U.S. and China each slapped tariffs on $34 billion in each other’s goods.

“I think there’s still this belief that there will be some resolution to this at the end of the day,” said Peter Boockvar, chief investment officer at Bleakley Financial Group. “I think people are hopeful both sides are throwing tariffs out there, but it won’t escalate further and that the dollar amounts aren’t huge.”

Markets have been watching the simmering trade war between the U.S. and China, which heated up in March when President Donald Trump announced he would put tariffs on $50 billion in Chinese goods, and stocks have traded in a choppy range since then. The tariffs that went into place Friday are the first step toward that $50 billion, with the rest expected in August. But the question is whether the trade dispute escalates beyond that since Trump has threatened to carry through with tariffs, on up to $500 billion of Chinese goods.

“Clearly there will be more headlines regarding trade. Some of them will be what we hear from corporations in the earnings season. The guidance in the earnings season is very important. Are we seeing companies put on hold any plans for hiring and expenditures?” said Quincy Krosby, chief market strategist at Prudential Financial.

The S&P 500 Tuesday briefly reached 2,795, its highest level since mid-March. Krosby said the key for markets will be at what point officials begin to negotiate about trade issues. “What you’re going to see is the market navigating through these headlines that are not specific. Clearly, there is a trade overhang in the market, that hovers above everything else,” she said. “Is this just the strident headlines forcing negotiations? Clearly, there will be negotiations, but what the market doesn’t know is at what point.”

JP Morgan strategists say they believe the stock market has already priced in a negative trade impact, but they expect stocks to remain supported by strong fundamentals. “In our view, even draconian measures should not greatly offset already strong US corporate fundamentals,” they wrote in a note. They said trade concerns could cause more volatility but they point to strong earnings growth, expected at 22 percent this year, and the tailwinds from tax cuts and fiscal spending.

Strategists say the market has also shifted its focus to second quarter earnings, which should be a positive and are expected to be up 21 percent, according to Thomson Reuters. But the earnings reports are also key in that they may include the next clues about whether trade is going to be a negative for the market or not.

The latest leg higher for stocks also coincided with Friday’s jobs report, which showed strong job growth of 213,000. James Paulsen, chief investment strategist at Leuthold Group said there was a similar move in June around the strong May jobs report.

“For the jobs report, what that’s telling me is the bigger issue is still overheat and the Fed. That’s really the big issue and trade is small in relation to that,” said Paulsen. “The thing is you don’t get a read on the Fed all that often, as opposed to an everyday tweet by Trump. You kind of come back to where we are on those bigger issues. We just got this heartwarming [employment] report across a number of different spectrums that feel like Goldilocks.”

Intertwined with the worries about trade and its potential impact on the global economy are doubts about whether the Fed can proceed with the two interest rate hikes it still forecasts for this year.

“That is going to be something analysts want to know. Is the Fed going to perhaps pause maybe, with the fourth rate hike everybody expects?” Krosby said. She said the market is looking for more specifics on trade with the European Union, the ongoing discussion on the North American Free Trade Agreement and further developments on China.

Traders have been hiding out in small caps, which they see has having less exposure to international trade disputes. The Russell 2000 hit an all-time high of 1,708 Tuesday before backing down.

JP Morgan strategists said an escalating trade war could bite into margins and Chinese tariffs could affect about 4 percent of S&P 1500 sales, generated in China.

“However, the real earnings impact will ultimately be determined by industry dynamics. Companies with lower pricing power will need to absorb a greater share of the tariff relative to end users. The pickup in trade rhetoric should be more detrimental for lower margin importers of consumer goods,” they wrote. They noted that retail, autos, household products and appliances could be impacted more than higher margin exporters, like cell phones, semiconductors and medical equipment.

“Most insulated from trade headlines should be companies with high domestic revenue exposure with limited goods sourced from abroad (i.e., Utilities, REITs, Telecom, and Restaurants have low direct/indirect trade exposure),” they wrote. Utilities, for instance, have been up 7.8 percent over the past month, followed by consumer staples, up 3.9 percent. Industrials, most exposed to trade wars, have lost 3.3 percent in the past month.

The current tariffs amount to a hit of less than 0.1 percent of U.S. GDP and less than 0.2 percent for China. An escalation, including threatened U.S. tariffs on auto imports, could cut global growth by a half percent, they said.

Stocks got a lift Monday after there were no fresh trade barbs over the weekend. The rally carried through into Tuesday, with the S&P 500 bucking up against a key technical level in the 2,792 area, with the 2,800 psychological level also looming. Tuesday’s highs were the highest since March 13. The S&P closed at 2,793. 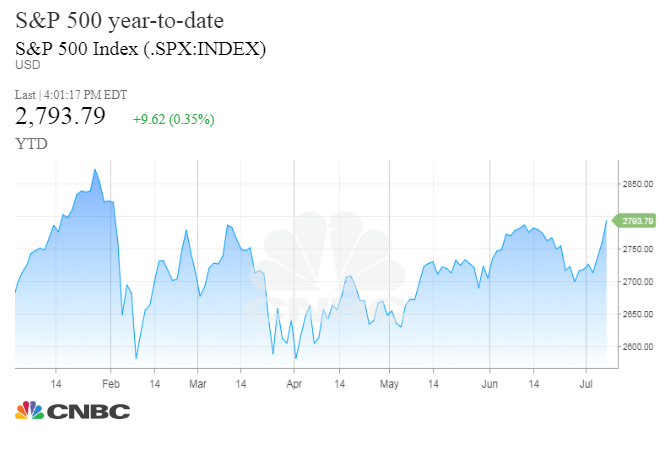 “Hitting resistance isn’t bearish. It’s just the market came a long way in the last two weeks. A pause here would make sense,” said Scott Redler, partner with T3Live.com. “Whenever the trade front is quiet, the market rallies.” Redler said if there was news of that negotiations were beginning again, stocks would surge and 2,850 would be in sight quickly.

“Of course, it could escalate into a horrible thing, but I think the odds are very small of that happening. The more likely outcome of the two I think, I would pick by far over a massive all out trade war would be an agreement to lower tariffs,” said Paulsen.