The S&P 500 posted on Friday its best closing level since early February as shares from some of the largest tech companies hit record highs.

“2,800 has been a significant level both mentally and technically for the market,” said Jeff Kilburg, CEO of KKM Financial. “I think this will be a short-lived move above 2,800, however” as trade concerns and corporate earnings releases keep gains at bay.

The Dow Jones Industrial Average rose 94.52 points to 25,019.41 with United Technologies and Walgreens Boots Alliance outperforming. The Dow also closed above 25,000 for the first time since June 15. The Nasdaq Composite eked out a small gain to close at 7,825.98, a record.

Some of the major U.S. banks reported earnings Friday before the open. J.P. Morgan Chase posted better-than-expected earnings and sales, as its trading revenue rose 13 percent in the second quarter on a year-over-year basis. Citigroup, meanwhile, posted a stronger-than-expected profit but its revenue for the quarter missed. J.P. Morgan Chase slipped 0.5 percent after rising as much as 0.9 percent, while Citigroup dropped more than 2 percent.

Wells Fargo’s earnings and revenue both missed as its fake-account scandal is still taking a toll on the company. The bank also said a tax hit of $481 million also pressured the results. Shares of Wells Fargo fell 1.2 percent.

Jeremy Klein, chief market strategist at FBN Securities, said the “response to the earnings announcements from three of America’s biggest money center banks seemingly hints at an uneven upcoming reporting season,” He also added, however, that ”if companies can maintain their extremely elevated profit forecasts for the next several quarters, then stocks should enjoy a stiff tailwind at their backs.“

Stocks posted strong weekly gains, with the Dow, S&P 500 and Nasdaq all rising more than 1.5 percent. The major indexes have risen as concerns over a trade war between the U.S. and China have eased.

Earlier this week, the U.S. unveiled tariffs on $200 billion worth of Chinese goods. However, a lack of response from China to these levies has assuaged some fears of conflict escalation. 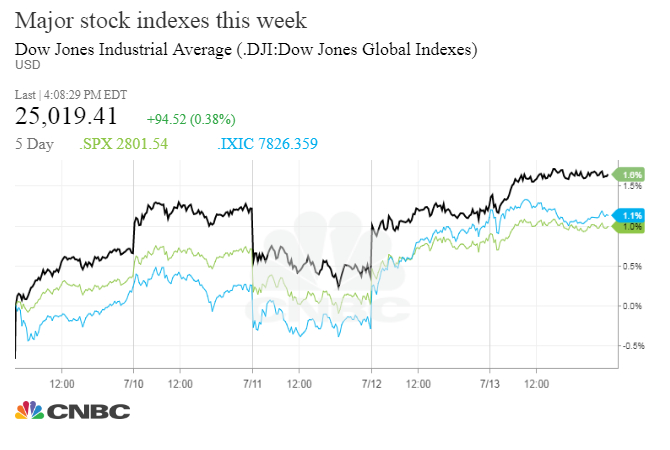 “Investors are looking past a lot of the global headlines and into the earnings reports,” said Jack Ablin, founding partner of Cresset Wealth.