Pharmacy wholesaler Sigma Healthcare says the coronavirus pandemic has delivered some opportunities including the rising importance of personal protective equipment, despite sales and underlying profit sliding for the first half of 2021.

The business, which has chemist brands including Guardian and Amcal, posted sales revenue of $1.6 billion for the six months to June, down 12.5 per cent. Sales were impacted by the My Chemist and Chemist Warehouse Group's exit last year, though Sigma has since gained back the Chemist Warehouse fast moving consumer goods (FMCG) contract. 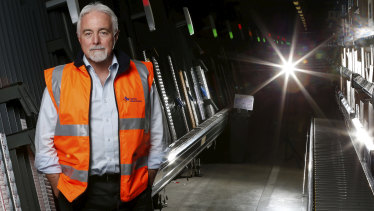 “We do think there’s a longer term opportunity given the demand for PPE is likely to stay at higher levels”: Sigma chief executive Mark Hooper. Credit:Darrian Traynor

Reported net profit for the half was up 87 per cent to $4.7 million, though the result was impacted by one-off items including expenses relating to the company's restructure process and proceeds of the recent sale of two of its distribution centres.

When those factors were taken into account, underlying profit was down 5.1 per cent to $10.6 million.

Sigma chief executive Mark Hooper said on a call to analysts on Thursday morning the past six months had shown there was "never a dull day at Sigma" and there continued to be "no shortage of challenges" for the business.

However, he pointed to bright spots throughout the half including an increase in sales hospital sales of 22 per cent for the half and strong demand for personal protective equipment (PPE) products through Medical Industries Australia, which the company acquired in 2018.

"We do think there’s a longer term opportunity given the demand for PPE is likely to stay at higher levels," Mr Hooper said.

Merchandise and marketing income was hit over the past six months as activity slowed down in the face of COVID-19, while a number of the chemist sites in Sigma's network are located in airports and CBD areas, Mr Hooper said.

Sigma also increased its provision for doubtful debts for the half in anticipation that the pandemic could cause delays in payment times and debtors unable to pay in the coming months.

"As we think about the last six months, we have not seen any systemic shift — but that said, there are still occasions where we’ve had to extend payment terms for customers," Mr Hooper said on the earnings call on Thursday morning.

"We still have a general concern about the medium-term impact of bad debt provisions around COVID-19."

The company declined to give future earnings guidance and did not declare an interim dividend.