Russia can be made to pay for Ukraine destruction now

Billions of people around the world are watching helplessly as Russia’s invasion of Ukraine accelerates into its third week, continuing to kill more innocent people every day, while destroying infrastructure throughout the country and forcing millions of refugees into neighbouring European countries.

There is one positive step that the US and like-minded countries should begin developing immediately to ensure that Russia at least is held responsible for the cost of humanitarian assistance, reparations and eventual reconstruction: Tap Russian foreign exchange reserves that are held in central banks outside the country and that have been frozen by their governments. 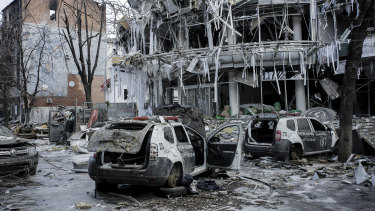 Damaged vehicles and buildings in Kharkiv city centre on Wednesday: Russia should pay reparations for the destruction of Ukraine.Credit:AP

According to the most recent data supplied by Russia’s central bank, as of June 30, 2021, Russia’s foreign currency reserves totalled $US585 billion ($803 billion), though not all of this would be accessible to pay for damages.

That’s because Russia holds a good portion of the total in gold at home (22 per cent), a substantial amount of renminbi in China (14 per cent), and some in international institutions (5 per cent). Subtracting these amounts leaves about $US350 billion ($480 billion) in “available reserves” for distribution — mostly held by France (12 per cent), Germany (10 per cent), Japan (10 per cent) and the US (7 per cent), with the rest scattered among many other countries.

In the past, reparations have been paid after hostilities ended by the aggressor country — that was Germany in the first two world wars. Now, the fact that many countries already have control over Russia’s holdings of foreign currency means that, in effect, reparations for the Ukrainian invasion have been pre-funded by Russia itself. This is an admittedly unique circumstance, but there is a basis in international law for enabling nations that hold these reserves to commit them to pay for damages.

Russia has committed on a massive scale what under US law is considered an “intentional tort”: unprovoked violence, which requires at a minimum that the aggressor pay damages for human suffering, deaths and property losses. In December 2005, the United Nations General Assembly adopted a resolution affirming a variation of intentional tort doctrine by providing a right to reparations to victims of human rights abuses under international law.

The UN resolution is not self-enforcing, however. Instead, it charges member states to establish “national programs for reparation and other assistance to victims in the event that the parties liable for the harm suffered are unable or unwilling to meet their obligations.” It’s a safe bet that Russia won’t be willing to meet these obligations, so other countries now holding Russian reserves can best enforce the reparations principle by agreeing on a common plan.

In theory, reparations and other assistance for Ukraine would have the most international legitimacy if it were administered by the UN, though there’s no precedent for the UN doing so. Moreover, even if the UN General Assembly — which already has censured Russia for its invasion of Ukraine — were to establish such a program, Russia, and perhaps China, would veto it at the Security Council.

Nonetheless, a coalition of willing states could establish their own special reparations task force to rectify the massive human rights wrongs committed by Russia in Ukraine. Ideally, the task force would be a relatively small, nimble new body led by internationally recognised names with a reputation for integrity on par with the late Kofi Annan, the former UN Secretary General who won a Nobel Peace Prize.

A coalition of willing states could establish their own special reparations task force to rectify the massive human rights wrongs committed by Russia in Ukraine.

It should be staffed by experts provided by countries whose central banks hold Russian foreign currency reserves, along with others from nonprofit and private sectors, preferably with government expertise. Representatives of the Ukrainian government should be involved.

The types of damage outlined above call for a three-part process:

First, the task force must develop a process to reimburse costs for humanitarian relief borne by the European countries that are taking in Ukrainian refugees. A rough accounting for just the first year could allocate $US5,000 a person, which for an eventual five million refugees would amount to $US25 billion.

Plans should be made for a longer period in case refugees are prevented from returning home after a year. The price tag for humanitarian aid and relocation could easily soar above $US50 billion. 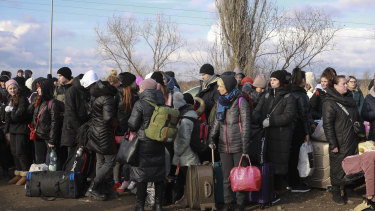 Second, a substantial portion of the Russian reserves should be used to compensate Ukrainians for loss of property. (This could be hugely complicated if property records, in paper archives or stored on computer hard disks, are destroyed in the war.) If reparations for 11 million Ukrainian family units (the population of 44 million divided by 4) averaged out to be $US20,000 a family, the total would reach $US220 billion. Add to this potentially tens of billions to compensate surviving family members for the wrongful deaths of their loved ones, both military and civilian, caused by the Russian invasion.

Third, some portion of the reserves should fund reconstruction. This would be implemented only if Ukraine prevails in the war (say, by being able to hold on to some western portions of the country), or if and when Russia returns sovereignty to the whole country. Until then, reconstruction funds would be held in trust and invested in income-producing assets. Russian-inflicted damages already likely exceed $US100 billion, and will mount much higher as the war continues.

Once a plan is agreed upon, the nations holding the Russian reserves could fund it in one of two ways: they could agree to have their central banks transfer the money to a single entity, such as the Bank for International Settlements (a central bank for all central banks) ; or each nation could make pro rata distributions according to an agreed schedule.

It’s possible, if not likely, that the available $US350 billion would be quickly exhausted by funding all three components of this plan — especially if the countries involved decide to hold back some portion of the reserves to be returned to Russia on the condition that it restores full sovereignty to Ukraine. A holdback might provide an incentive for possible new leadership in Russia to do the right thing in the future, though there would be plenty of justification for not returning a dime.

The world may not be able to prevent the humanitarian disaster unfolding in Ukraine for fear of provoking World War III, but a coalition of the willing has the means to alleviate some of the suffering.

If there’s not enough money to cover everything, then reparations would need to be prioritised and limited. It would be important to move cautiously on spending beyond funding immediate humanitarian aid. Events are fluid and the reparations task force would need to adapt to unexpected developments. It also needs to decide when to begin making payments. Ideally, money could begin flowing as soon as families are reunited, but there’s no way of anticipating when that will happen. Another option is to spread out payments over time.

In my view, China would not be part of the proposed task force unless it contributes its own holdings of Russia’s foreign currency reserves and succeeds in persuading Russia to assure Ukraine’s sovereignty. If it does that, it would be worth dealing with the potential complications of having China participate in overseeing the distributions.

To establish the task force and its broad authority, each participating nation would probably need to get the approval of its key legislative bodies — such as Congress, in the US. This could be expedited if those legislators immediately authorised their heads of state to dispatch officials to develop the outlines of the plan that would be submitted for legislative approval.

The world may not be able to prevent the humanitarian disaster unfolding in Ukraine for fear of provoking World War III, but a coalition of the willing has the means to alleviate some of the suffering, and to make Russia responsible for funding a substantial portion of the massive reparations that will be required.

Robert Litan, a non-resident senior fellow at the Brookings Institution and shareholder at Berger Montague, was formerly the director of research at Bloomberg Government and associate director of the Office of Management and Budget.