Home » Markets » 'Running toward the fire': One expert explains how investors have created a scenario where a 50% market crash is 'optimistic'

'Running toward the fire': One expert explains how investors have created a scenario where a 50% market crash is 'optimistic'

After all, theFederal Reserve has signaled it will cut rates later this month, a practice historically associated with further equity-market gains.

Yet although many market participants are surely elated with their returns, others prefer to look at that euphoria as a sign that sentiment is overheated.

John Hussman, president of Hussman Investment Trust, sits firmly in that camp. He has once again reiterated his belief that the market is trading on borrowed time. And, in typical fashion, he’s not sugarcoating hisprognostications when it comes to the US stock market’s future.

“Presently, we observe market conditions that have been associated almost exclusively, and in most cases precisely, with the most extreme bull market peaks across history,” he wrote in arecent blog post.

At the core of Hussman’s main argument in the post is the idea that monetary easing isonly a boon for stocks when market sentiment is positive. Noting that internals have recently tilted negative, the renowned market bear thinks investors are missing an extremely important factor: the direct correlation between Fed interest rate cuts and periods of economic strife during previous similar instances.

“While investors appear exuberant about the prospect for Fed easing, they seem largely unaware that initial Fed easing have almost invariably been associated with US recessions,” Hussman said. “They’re running toward the fire.”

And he thinks investors are about to get burned.

Hussman continued: “With the exceptions of 1967 and 1996, every initial Fed easing (ultimately amounting to a cumulative cut of 0.5% or more, following a period of tightening in excess of 0.5%), has been associated with a US economic recession,” he said, providing a stark historical backdrop for his assessment.

But the Fed isn’t the only thing Hussman is worried about. To further his thesis, he points to valuation metrics that are way out-of-whack.

The first red flag compares market capitalization (nonfinancial) to corporate gross value-added (nonfinancial). It’s now trading at an end-of-cycle multiple higher than any other in history. 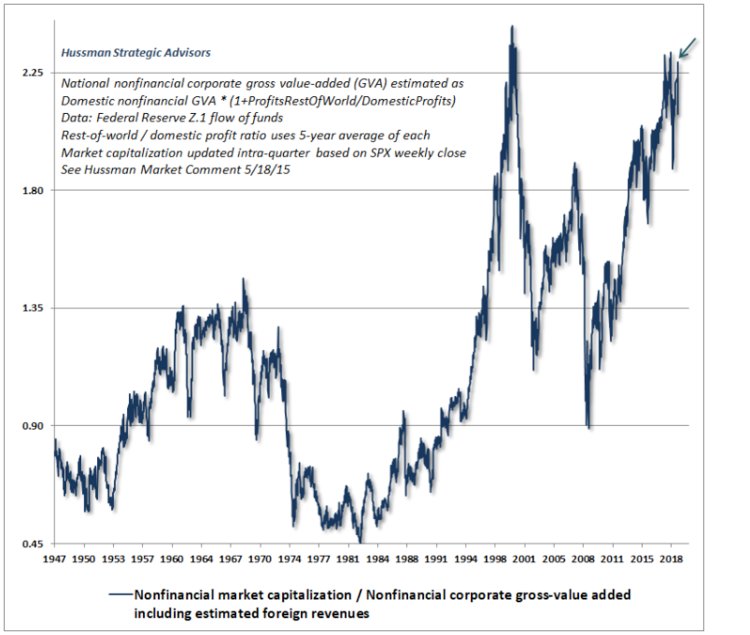 Beyond that, Hussman depicts the margin-adjusted price-to-earnings ratio, which is analogous to a market-wide price-to-revenue ratio. He notes it’s also teetering towards nosebleed levels. 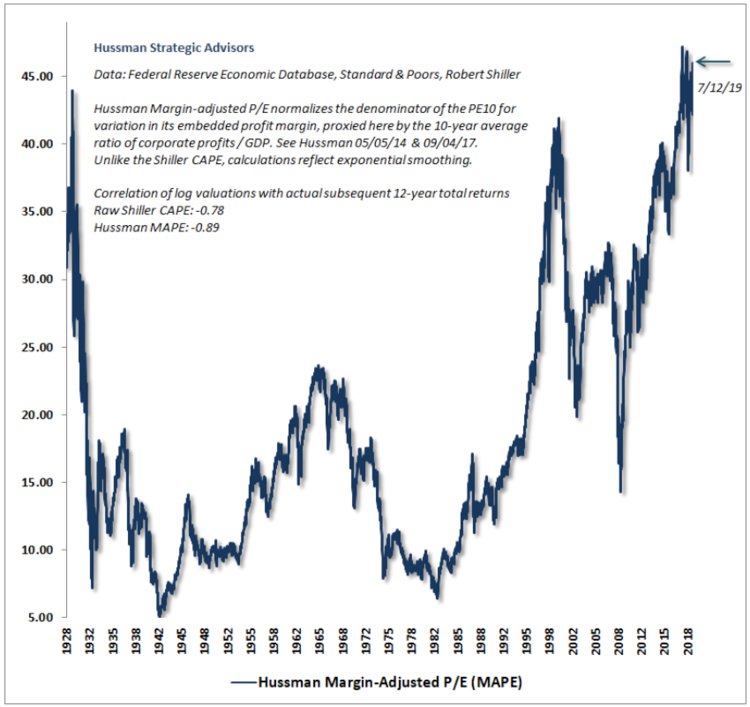 Put simply, according to Hussman, valuations are lofty — and instead of cheering the Fed rate cuts, investors should be heading for the hills.

He goes on to refer to a 50% market loss as “a rather optimistic scenario,” and continues to expect a decline between 60% and 65%.

For the uninitiated, Hussman has repeatedly made headlines by predicting a stock-market decline exceeding 60% and forecasting afull decade of negative equity returns. And as the stock market has continued to grind mostly higher, he’s persisted with his calls, undeterred.

But before you dismiss Hussman as a wonky permabear, consider his track record, which he breaks down in his latest blog post. Here are the arguments he lays out:

In the end, the more evidence Hussman unearths around the stock market’s unsustainable conditions, the more worried investors should get. Sure, there may still be returns to be realized in this market cycle, but at what point does the mounting risk of a crash become too unbearable?

That’s a question investors will have to answer themselves. And it’s one Hussman will clearly keep exploring in the interim.