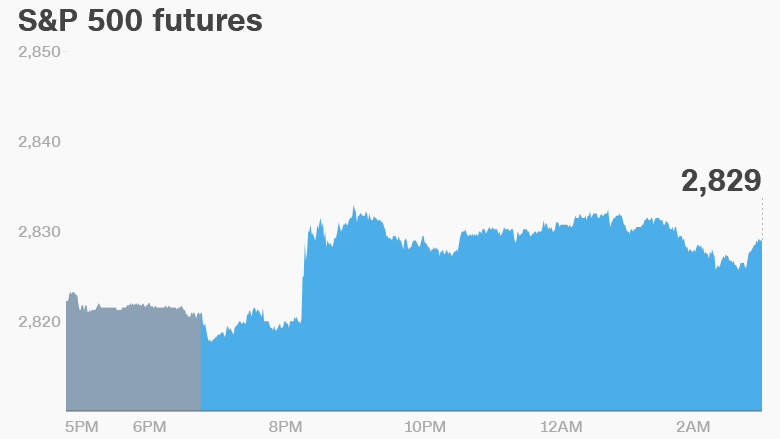 1. Retail therapy: It’s a big day for US retail earnings.

Walmart (WMT), Dillard’s (DDS) and JCPenney (JCP) are set to release earnings before the open. Nordstrom (JWN) will follow after the close.

Consumer spending accounts for more than two-thirds of the American economy, making these retail reports especially important to assess the country’s economic health.

2. Pain in China: Stocks were under pressure in China on Thursday as investors reacted to disappointing earnings from Tencent (TCEHY).

Shares in the Chinese tech giant fell sharply at the open in Hong Kong, before recovering some lost ground to trade down 3%.

Tencent posted a rare earnings miss on Wednesday, a performance it attributed to a lack of sales from popular tactical tournament games and the timing of new game releases.

3. Trade developments: China announced that new talks with the United States are scheduled to take place amid a trade war between the two economic superpowers.

4. Global market overview: Despite negative sentiment in Asia, US stock futures were higher.

European markets were mostly positive in early trading, with the exception of the Italian FTSE MIB index, which was down by about 2%.

Italian stocks were dragged lower by a 25% drop in shares in Atlantia (ATASY), the operator of a bridge that collapsed earlier this week in Genoa.

The Turkish lira continued to recover after several weeks of steep losses. The main Turkish stock index is down just 1%.

The Turkish government took steps on Wednesday to discourage short sellers, and announced $15 billion in new investment from Qatar.

5. One to watch — Cisco: Shares in Cisco Systems (CSCO) are expected to surge at the open by about 6% as investors react positively to its earnings.