Too soon. Only 50 days after the release of the royal commission’s highly damaging report into the atrocious behaviour of major financial organisations and the regulator is already getting the first signs of push-back.

The initial wave of response from the industry was a universal and comprehensive mea culpa for failing their customers and abusing their trust and then a promise they would engage in a cultural revolution.

But cracks have started to emerge as have pockets of resistance, according to the corporate regulator. 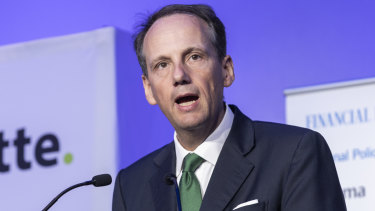 In response, the Australian Securities and Investments Commission chairman James Shipton delivered a shot across the banks’ bows this during the Australian Financial Review's banking and wealth summit on Wednesday. He warned them to desist complaining about the potential for criminal prosecution and dispense with the technical legal arguments.

Shipton even said that criticism of tough action against banks and financial institutions suggests those in the frame have something to hide.

Meanwhile, ASIC’s enforcement commissioner (and chief rottweiler) Daniel Crennan told the same audience that there was no point in financial services companies engaging in brinkmanship or gamesmanship and that the best thing they could do was co-operate.

(Or they could start with not breaking the law.)

With its own reputation on the line, ASIC isn’t about to back down. Crennan points to his desk overflowing with an increasing number of legal briefs for both civil and criminal cases.

It was during the banking conference and the parliamentary grilling of two bank chief executives in Canberra on Wednesday that we also saw evidence of a willingness by some banks to blame the royal commission for the credit tap being turned to a trickle.

ANZ chief executive Shayne Elliott and the head of Westpac’s institutional bank, David Lindberg, broadly agreed that banks had become a bit gun-shy about lending in the midst of the intense focus on responsible lending created by the royal commission.

And if you throw in the emergence of more cautious borrowers who are concerned about the falling value of their home and feeling that negative wealth effect, then it’s easy to see why, as Lindberg says, "Australian businesses have stopped investing in themselves”,  and “demand for credit has slowed and business credit growth has sunk lower than we have seen in recent memory".

Elliot recognised that in ANZ’s case the pendulum had swung too far towards being conservative about lending and that higher credit standards had made it more difficult for some to borrow.

Not everyone agrees. Graeme Samuel, who is chairing a review into the Australian Prudential Regulation Authority, dismisses the notion, saying that blaming the royal commission for a credit squeeze was "a load of utter nonsense". 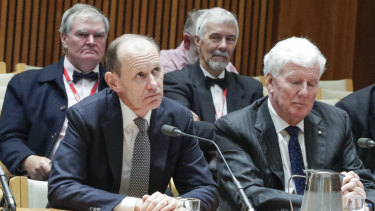 ANZ chief executive Shayne Elliott says the bank has been too cautious about lending.Credit:Alex Ellinghausen

Neither is Shipton swallowing that argument, saying that it was a myth that the regulations were causing economic concern.

NAB’s interim chief executive, Phil Chronican, told the parliamentary committee that the loan approval process had slowed because of additional rigour that was being applied to the validation of borrower’s expenses but the proportion of loans approved remained the same.

But he said the number of number of applications were down.

Basically it now takes longer and requires more staff to go through the loan application process.

But he also suggested that NAB was increasing market share in both mortgages and small business lending.

So banks differ a bit on their accounts of why there is credit crunch. But to the extent that it is a consequence of the royal commission there will be little sympathy for the banks – who will be seen as bringing it on themselves.

And as for the prospect of bankers being put in jail, Chronican said Crennan’s ambitions raised "difficult questions".

(Bear in mind that NAB is defending the charging of fees-for-no-service case with an argument that it was the result of incompetence rather than deliberate theft – even though it repaid customers.)

"If people intentionally break the law, there has to be a consequence for it," Chronican admitted, adding that it might lead to a more fearful management cohort.

One suspects that would be exactly what Crennan and Shipton are looking to achieve.

50% of Americans Want to Retire at 60, but Whether They'll Get to Is a Different Story

How to Use the Holidays to Repair Your Network
Politics News