Former National Australia Bank chief Andrew Thorburn has promised robust checks and balances will be in place during his leadership of a new climate-focused investment firm, as he seeks to begin a new chapter of his career in sustainable investing.

Mr Thorburn resigned from NAB in 2019 after he was personally singled out, alongside former NAB chairman Ken Henry, by the banking royal commission’s final report for failing to learn lessons from past misconduct. 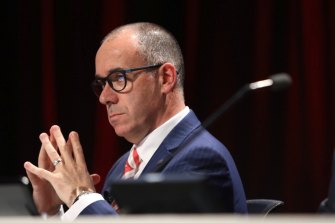 NAB was a key offender of the fees for no service scandal, illegitimately charging customers more than $100 million, and the bank’s decision to continue paying bonuses during this period triggered a record-breaking investor revolt over executive pay.

Mr Thorburn would not be drawn on the past when asked by The Age and Sydney Morning Herald how the public would reconcile the seeming contradiction between his departure from NAB and his new role seeking to “change the world” through investing.

“I’m a bit older and wiser, I hope. And I’m contributing that as a mentor and a guide. At Sentient, I’m a chair, I’m not involved in the business day to day.”

Mr Thorburn said it was important the company had a “clear and compelling vision” and attracted people who were “deeply aligned with that vision”.

“When I look across thee team at Sentient we’re gathering, we’re getting those people who are really smart, really committed. But they’re doing it because they really want to make difference to the world as well,” he said. “You do need to have really good processes and checks and balances.”

Since leaving NAB, Mr Thorburn has pursued a range of roles in the sustainable finance industry, the latest of which is chair of Sentient Impact Group, that provides debt and equity to small-scale projects in the clean energy and regenerative agriculture space.

“I’ve worked in finance, specifically banking, most of my career. But when I finished I really started to think about areas that I was passionate about where I could make a difference. Where I was looking for the alignment of capital, money, but helping change the world,” Mr Thorburn said. “I read more books, talked to more people, listened to podcasts.”

“It’s not just about the short-term return, financial return. But using the power of capital to help the world improve and heal and get better faster.”

Sentient manages around $250 million on behalf of retail and high net worth investors. The firm has just signed a $20 million deal with renewables company Zen Energy to provide solar panels and batteries to its existing clients. Mr Thorburn said there were enough opportunities for an investment firm of Sentient’s size to invest in Australia’s clean energy transition, but there would need to be greater long-term certainty around energy policy as the company pursues scale.

“What Australia needs and any country needs is a clear long-term policy framework that comes out of good consultation,” he said, although declined to weigh into the politics of climate and energy policy.

The ethical investment movement has gained pace in Australia in recent years, with most major investment houses now offering sustainable financial products to clients and a string of boutique operators entering the market.

Sentient’s chief executive Oliver Yates, the former chief executive of the Clean Energy Finance Corporation who challenged Treasurer Josh Frydenberg as an independent candidate in the 2019 election, said what differentiates this company is its narrow focus on impact investing.

“We don’t have any other things we do. We don’t have fossil fuels on one side then a sustainable fund on the other side. We’re impact through and through,” Mr Yates said. “We’re non-conflicted.”

Australia’s carbon credits sector has come under scrutiny after the architect of the system-turned-whistleblower Professor Andrew Macintosh said last week most projects were fraudulent and undermined the country’s net zero emissions ambitions.

Mr Yates said this is why it is important to have quality providers of regenerative environmental projects, adding the revelations were not surprising because the government used the carbon market to avoid introducing substantial climate policy. “There was a distinct political motive to generate carbon credits whether they are valid or not – at the lowest possible price,” he said. “They [the government] didn’t need to take action on climate change because the government could secure carbon cheaply through this mechanism.”