Home » Markets » Of zombies and unicorns: the perils of low interest rates

Of zombies and unicorns: the perils of low interest rates

In the ordinary course of events, central bankers are meant to be bland and boring.

To his credit, our Reserve Bank governor Phil Lowe usually does a pretty good job of delivering on both accounts, at least in his public persona.

But these are no ordinary times. 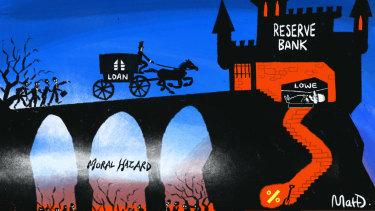 These include a menagerie of ghoulish things, including “zombie firms” and "moral hazard".

While broadly concluding that such unconventional measures – such as negative interest rates and asset purchases by central banks – are helpful to economies, they don’t come without their pitfalls.

First, if used to hold the cost of borrowing low for a long time, such policies can extend a lifeline to “zombie firms”: namely, less-productive firms which would be better shot in the head.

Zombie firms, you see, devour the brains and sap the potential of economies by using up resources that could be put to better use.

When money is directed to these less efficient parts of the economy, “a serious misallocation of credit could lower the economy’s growth potential and potentially feedback into lower equilibrium interest rates”.

Nor is the effect of radical central bank action in encouraging “moral hazard” – which has less to do with extramarital affairs than one might imagine.

Rather, it’s when investors and other actors, including governments, come to believe independent central banks will always come to their rescue, leading them to act in more reckless ways.

“It does run the risk of eroding incentives for the private sector to maintain adequate buffers against financial stress,” write Lowe and Loh.

While promoting greater risk-taking among investors and consumers is a deliberate goal of unconventional policy measures, it can go too far, creating fragility in the long term.

And it’s not just private individuals.

“Likewise, it might induce a bias towards inaction among other policy authorities, such as regulatory, prudential and fiscal policymakers,” warn Lowe and Loh.

Indeed, even usually conservative bodies such as the BIS and the International Monetary Fund have begun increasing their calls for governments to step up to the plate to tackle low growth with other policies.

It’s a call echoed by economist and venture capitalist William Janeway, who is in Australia this week to speak to the Economic Society of Australia.

Janeway, who has studied the key role governments have played in all great technological revolutions, from railways to the internet, says governments have  "abdicated" their role in promoting growth in recent decades, leaving central banks as the "only game in town".

Among the menagerie of exotic risks created, Janeway adds "unicorn firms", firms valued at more than $US 1billion but with often no foreseeable positive cash flow.

In a world when interest rates return to something resembling normal, investments in such firms simply won’t stack up. Investors will do their dough.

It’s one of the ways that the global savings glut – fuelled by ageing populations – will be mopped up. But it’ll be painful.

So, are central banks wrong to deploy their unconventional policies?

Janeway says it's hard to blame central banks for refusing to sit idly by while more citizens join the unemployment queue than necessary.

“It’s very difficult to say that they should sit on their hands and not do what they can.” All central bankers can do, Janeway says, is “continue to use all of their moral persuasion powers – which are usually directed at financial institutions – to direct them at the political authorities”.

In this respect, Lowe is beginning to sound like a broken record, repeatedly calling for greater infrastructure investment by government and concluding this week's FT piece: “Policy makers should avoid placing a disproportionate burden on monetary policy.”

Even as he prepares to lead interest rates lower, one senses Lowe's growing discomfort with hogging the limelight.

Time, instead, for the nation’s politicians to flick the fiscal policy switch to vaudeville. Lowe’s one-man show is getting altogether too interesting, indeed.

The Pros and Cons of Privatizing Social Security

Why Visa Inc., Mastercard Incorporated, and First Data Corporation Shares Rose in the First Half of 2018

The Positives and Negatives of Bonds