National Australia Bank chairman Phil Chronican says mortgage lending curbs would make sense if regulators wanted to take some of the heat out of the booming housing market which has been ignited by ultra-cheap debt.

But the banking veteran says any such move to put the brakes on housing lending would only have a temporary impact on house prices, which are ultimately being inflated by inadequate supply and cheap money. 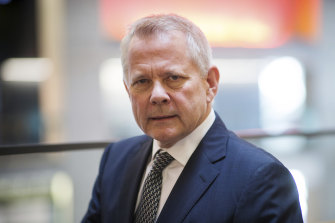 “We are running an extraordinarily accommodating monetary policy with interest rates at levels that none of us can remember, because they are completely unprecedented,” Mr Chronican told a Governance Institute lunch in Sydney.

“We shouldn’t be surprised that that’s going to show up in price inflation in some form or another. At the moment, we’re seeing that in asset price inflation, and it’s not just real estate, we’ve seen financial assets as well.”

If policy-makers wanted to continue getting the economic benefits of very low rates, without the surge in asset prices, he said intervening in the market through credit restrictions known as “macroprudential” policies would be a “rational response.”

“There are plenty of economies, particularly in economies like Singapore and New Zealand, where macroprudential policies have been brought in for short periods of time to take the heat out of the market. And if that happens, then as I said, that would be understandable,” Mr Chronican said.

But Mr Chronican, who did not say when such a move may occur, added that credit restrictions of this type typically only worked for a relatively short period of time. That is because unregulated lenders may be exempt from credit curbs, and in case case, the policy would not deal with the underlying shortage of houses for sale.

Mr Chronican made the remarks following a speech arguing Australia faced a “critical moment in time” to implement policy reforms aimed re-igniting business investment and productivity after the pandemic.

In the speech, Mr Chronican supported a return to skilled migration, but said this needed to be supported by investment in infrastructure and housing stock. NAB has previously tipped house price growth of about 10 per cent for 2021.

“And I just point out that we’re seeing this strong house price growth at a time when Australia’s population growth is at record lows. You can imagine what the pressure is going to be like as migration is reopened in coming years,” Mr Chronican said.

Many other senior bankers and economists have also predicted there will be some form of action to slow the property market — though when that might happen is debated.

The Reserve Bank has repeatedly said it is closely watching the mortgage market and that regulators could take action if bank lending standards slip.