NAB directs staff back to office after months of remote working

National Australia Bank has instructed employees to start returning to the office, aiming to have buildings at 40 per cent capacity within coming weeks.

The big four bank sent an email to its 34,000 workers this week outlining plans for all staff outside of Victoria to return to their offices, after introducing work from home arrangements in mid-March as COVID-19 restrictions were introduced nationwide. 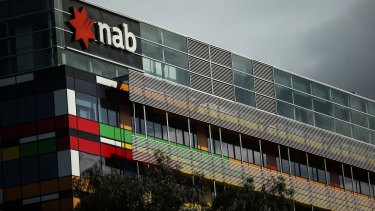 NAB’s Melbourne office has been “mothballed” since July.Credit:Pat Scala

NAB is one of the country's first major employers to encourage staff to return to the office after months of working from home.

The email, sent by NAB executive Susan Ferrier, told staff the plans were dependent on the bank's ability to maintain social distancing within buildings.

"By returning to the office, we want to start again unlocking the benefits of in-person collaboration, such as better innovating for customers, learning from each other, problem solving together, mentoring and building our high-performance culture," Ms Ferrier said.

"But importantly, we will not be returning to the way things were before the pandemic. COVID-19 has challenged us all to think, work and act differently and we want to ensure that we retain the best of what we’ve learnt – and get back to something even better."

NAB has developed an online booking system in which specific desks are reserved ahead of time and information about the amount of time employees spend at the office is recorded to help with contact tracing efforts "as required".

Hot desking will be ditched and limits placed on the number of people permitted to ride in lifts as the bank encourages staff to remain 1.5 metres apart as recommended by health authorities.

The offices in Sydney, Brisbane and Adelaide will undergo daily deep cleaning, including individual workspaces, and communal cutlery will also be forbidden.

The majority of NAB's Melbourne employees will continue to work from home until the state government changes its health guidance around working in the CBD, as certain industries in the city began to reopen this week.

NAB's "front-line staff" in Victoria, including those working in branches and teams that cannot perform work remotely, will continue to work in the office.

"I want to recognise the collective effort of all of you throughout the most challenging economic and social uncertainty most of us will have experienced in our lifetime," Ms Ferrier said.

The return to office directive comes the week after NAB announced it had set aside $138 million to modify its Melbourne offices as more staff choose to work from home permanently.

NAB chief executive Ross McEwan, who has not physically met with his executive team in over six months, told staff last week there were plans to consolidate the Melbourne office spaces as more staff adopted a "flexible and hybrid" approach to work.

"I do want us to return to work in our commercial buildings when it is deemed safe to do so and in a way that gives colleagues more flexibility than pre-COVID working," Mr McEwan said.