Analysts expect Morgan Stanley to report earnings per share of $1.15 when the company releases results before the opening bell on Wednesday, July 18. Zacks Equity Research projects earnings of $1.08 per share. However, investors should keep in mind that the investment banking firm has beat estimates in 10 consecutive quarters, but that has not helped the performance of the stock. On Jan. 18, Morgan Stanley rebounded on positive earnings until Jan. 29, when gains were erased and the stock traded lower. Similarly, a modest gain after earnings on April 18 was quickly reversed as the stock continued to trade lower into July 6.

Banks have benefited from corporate tax cuts, but the flattening of the yield curve has been a concern for investors. The bigger banks tied to global banking activities could have unforeseen liquidity risks if the global economies falter. (For more, see: Morgan Stanley’s Stock May Fall 8% Further.)

The daily chart for Morgan Stanley 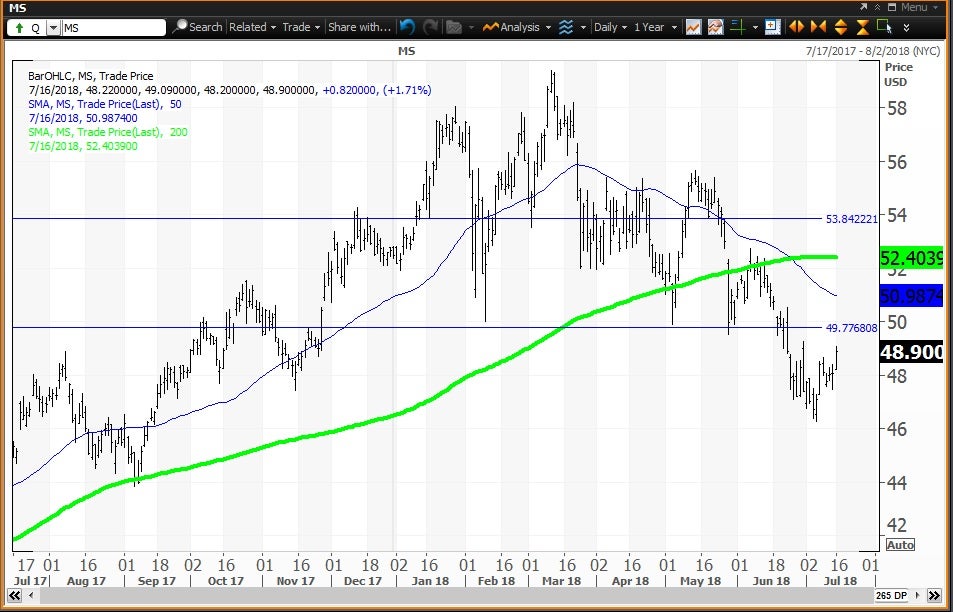 The daily chart shows that Morgan Stanley has been below a “death cross” since June 26. A “death cross” occurs when the 50-day simple moving average falls below the 200-day simple moving average, indicating that lower prices lie ahead. The stock is below two horizontal lines shown on the chart, which are the semiannual and monthly risky levels of $49.77 and $53.82, respectively.

[Learn more about the trading implications of crossovers between simple moving averages in the Technical Analysis course on the Investopedia Academy.]

The weekly chart for Morgan Stanley 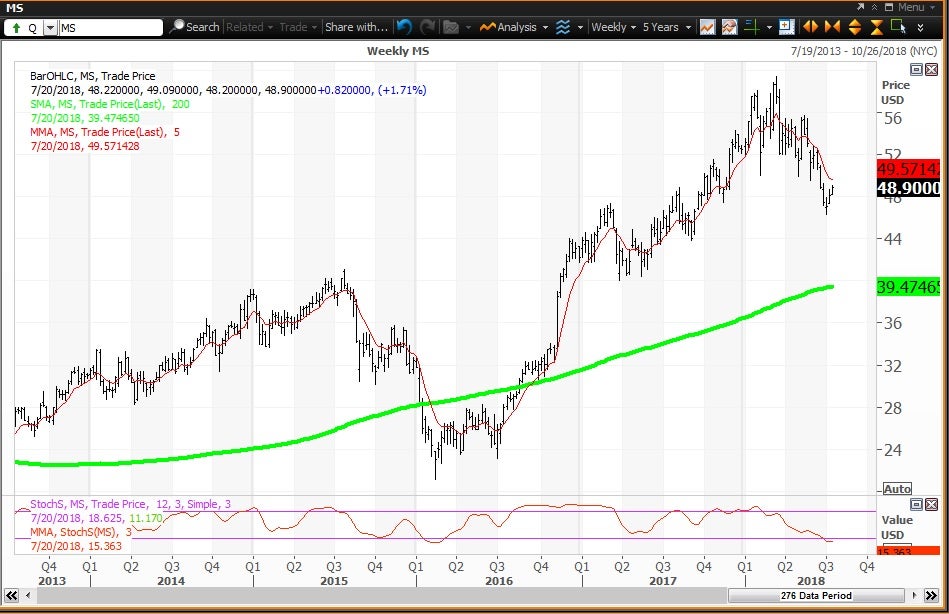 The weekly chart for Morgan Stanley is negative but oversold, with the stock below its five-week modified moving average of $49.57. The stock is well above its 200-week simple moving average at $39.47, which is the “reversion to the mean,” last tested during the week of Aug. 19, 2016, when the average was $29.92. The 12 x 3 x 3 weekly slow stochastic reading is projected to end this week below the oversold threshold of 20.00 at 15.36.

Given these charts and analysis, investors should by Morgan Stanley shares on weakness to the 200-week simple moving average of $38.47 and reduce holdings on strength to my semiannual and monthly risky level of $49.77 and $53.82, respectively. (See also: How Morgan Stanley Makes Its Money.)