In a clash between Australia’s biggest bank and the world’s largest listed company, Mr Comyn last month warned Apple was threatening to stifle competition through its dominance in digital wallets — apps that allow smartphone users to make tap-and-go and online payments. 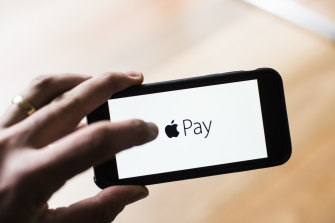 Apple has hit back at CBA’s warnings about the technology giant’s market power.Credit:Josh Robenstone

Mr Comyn also attacked the restrictions Apple places on access to the iPhone’s hardware. He said the tech giant was profiting from the payments business without making any contribution to the cost of sustaining payments infrastructure, while paying minimal local taxes.

Apple retaliated in a submission titled The Facts About Apple Pay, published by the Parliamentary Joint Committee on Corporations and Financial Services on Friday.

“Comments made during recent public hearings included misleading and false statements about Apple Pay and our business in Australia which Apple seeks to correct,” it said.

The iPhone giant rebuffed Mr Comyn’s comments on market power, saying these were a misleading interpretation of the data. It also claimed CBA was pushing for changes that would cement the bank’s dominance in Australia.

One of Mr Comyn’s key arguments was that it should be a concern that Apple Pay made up 80 per cent of CBA’s tap-and-go payments through digital wallets.

Apple did not dispute the number, but claimed the comment was misleading all the same. It argued the 80 per cent figure reflected the success of Apple Pay compared with rival digital wallets such as those offered on Android phones.

“The misleading 80 per cent figure shared initially by Commonwealth Bank and cited in future dialogue and media reports does not represent Apple Pay’s share of any market,” Apple said. “It is simply the percentage of Apple Pay transactions from Commonwealth Bank’s overall digital wallet payments at point of sale.

“This high usage of Apple Pay amongst Commonwealth Bank customers only demonstrates how strongly consumers prefer the convenience, security and privacy provided by Apple compared to the model being advocated by the Commonwealth Bank.”

“This is unsurprising given that Commonwealth Bank CEO Matt Comyn stated publicly in October 2019 that launching Apple Pay was the number one customer request when he asked customers what he should prioritise when he was appointed into his role,” the tech giant said in its submission.

Apple said its market share of all debit and payment cards in Australia – which is much larger than the digital wallet segment cited by CBA – was under 10 per cent, it said.

Another warning from Mr Comyn concerned Apple’s policy on access to the iPhone’s near-field communication (NFC) chip, which allows customers to use their phones as credit or debit cards.

In 2016, several local banks including CBA made an unsuccessful attempt to launch a collective boycott of Apple to try to pressure Apple to allow banks direct access to the chip, rather than going through the Apple Pay system. All the major banks have since relented and decided to provide Apple Pay on Apple’s terms.

Apple’s submission said there were ways for banks to access the chip, but it would not provide uncontrolled access to the NFC because this would raise the risk of hackers getting into iPhones and Apple watches.

Apple, which declined to appear before the committee last month, also said giving CBA control over its hardware threatened to stifle competition by allowing the bank to “lock out” competitors.

“Allowing Commonwealth Bank to have sole control of the NFC controller would assist them in not only locking out competitors, but also prevent innovation around non-bank use cases such as car keys or health insurance cards,” Apple argued.