Melbourne tech industry luminaries, including venture capitalist Paul Bassat, are fearful the Victorian government's harsh lockdown restrictions will have a severe and lasting impact on the state's economy and damage its emerging startup sector.

Mr Bassat, who is also an AFL Commission board director, said there was a "certain irony" to weekly team meetings at his Square Peg Ventures investment fund. Staff based in Israel are working in the office despite the country recording 3000 new COVID-19 cases a day, while Melbourne employees are stuck at home and subject to some of the world's tightest and longest restrictions. 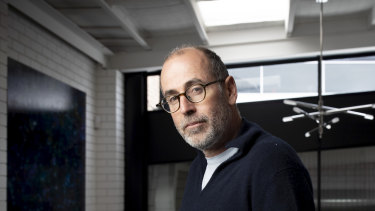 Mr Bassat said while he was not suggesting Israel had the right approach, Premier Daniel Andrews’ road map to end lockdown was based on "incredibly conservative benchmarks" and he was worried about the long term impact.

"We just have to find a way to enable us to operate the economy at a faster speed limit without going back into a third wave," he said. "We have to get all of the best and brightest people in the state and the country working on testing and tracing because I think it's pretty clear we're not as good as we should be."

Mr Bassat said business leaders had been accused of speaking out of self-interest, but said his concern was for the city and state he loved, with the companies in Square Peg's portfolio doing "pretty well".

"I think the consequence of a very extended lockdown, where economic activity is massively reduced, where kids are essentially missing out on an entire year of schooling, at least in-person schooling, we could feel the impact of this for the next next five or 10 years," he said.

I'm just really worried about what next year, the following year, or the year after, look like for people in our community

"I think as someone who loves Melbourne and loves living in it … I'm just really worried about what next year, the following year, or the year after, look like for people in our community, particularly people in need, particularly people who need to get jobs or have mental health issues, or don't have the same educational opportunities."

Adir Shiffman, chair of ASX listed sports technology company Catapult Sports, described the government's road map as "a highway to hell" and said instead of a universal lockdown, restrictions should be based on areas where there were clusters of cases.

"There are pockets that are booming in tech, like e-commerce, but everyone is very worried, particularly in Victoria, about what happens when JobKeeper ends," he said. "At the moment, the federal government is providing pocket money to the Victorian tech sector and we all know an economic cliff is coming."

Mr Shiffman said he had never anticipated there would be this level of sovereign risk involved in basing a business in Melbourne.

"I'm sure every business employing staff is reconsidering where to employ them," he said. "There is a tsunami of economic devastation coming to Victoria. In a situation where it is easier to work from anywhere now, Victoria is unreliable in terms of understanding and justifying decision making," he said. "That's not a great investment pitch."

However, the co-founder of health startup Halaxy, Alison Hardacre, said founders started businesses where they lived and the lockdown would not change that. Halaxy has staff based in Cork, Ireland, and Ms Hardacre said it was challenging managing workers in the country who had returned to the office while Melbourne employees were stuck at home.

She said the government's exit strategy was "very, very conservative" but she understood it from a health perspective.

"If Daniel Andrews can announce the financial support measures for businesses as soon as possible, he is going to stem some of the mental health impacts I would hope," she said.

Didier Elzinga, founder of employee engagement startup Culture Amp, said there were no easy answers and the government was in a difficult position.

"Is it too slow? Probably. Could we open up more quickly? Probably not," he said. "The problem we have at the moment is everyone is feeling deflated and flat. We have to keep an eye out for each other, it is a long slog."

The top technology stories and reviews delivered weekly. Sign up to The Age‘s newsletter here and The Sydney Morning Herald‘s here.