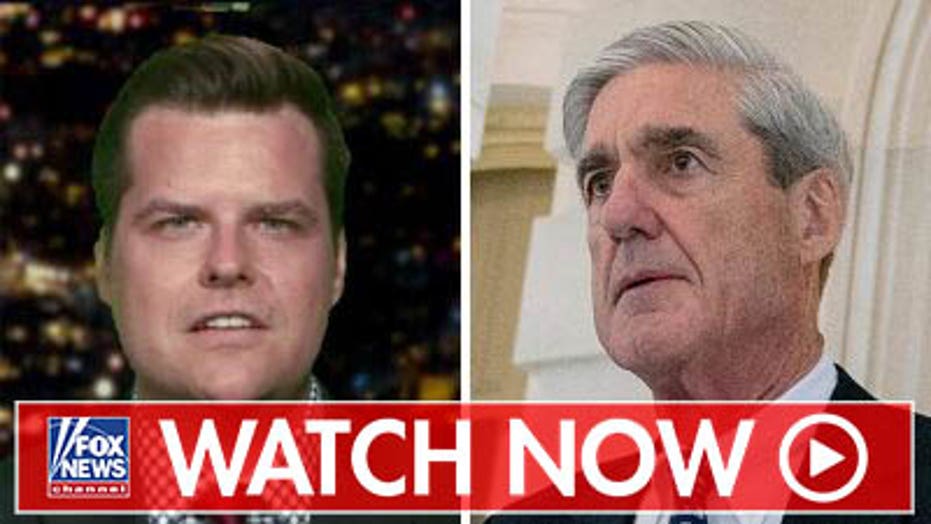 Desperate Democrats will try to use former Special Counsel Robert Mueller's upcoming Capitol Hill testimony to get the Russia investigation back in the headlines, Rep. Matt Gaetz, R-Fla., predicted Friday.

"The principal obligation of the Democrats from their standpoint is to use this committee hearing as a launching-off point to continue a witch hunt that the American people would like to do away with," Gaetz said on Fox News' "The Ingraham Angle."

Gaetz serves on the House Judiciary Committee, one of two panels scheduled to hear from Mueller next Wednesday. The former special counsel will also appear before the House Intelligence Committee.

Although most Americans oppose an impeachment inquiry against President Trump, some Democrats may plan to use Mueller's testimony to garner support for such proceedings, the lawmaker said.

"Democrats are presenting 'impeachment-in-drag' — dressing up a non-impeachment endeavor as if it were impeachment," Gaetz said.

He added that lawmakers should instead support Attorney General William Barr in his appointment of Connecticut federal prosecutor John Durham to probe the origins of the Russia investigation.

There is "zero evidence" President Trump is a "Russian agent," the Pensacola lawmaker added.

Trump says the stock market would crash if he were impeached: 'Everybody would be very poor'

Fed, Mueller, Xi Among Factors for Investors to Consider as Year Ends