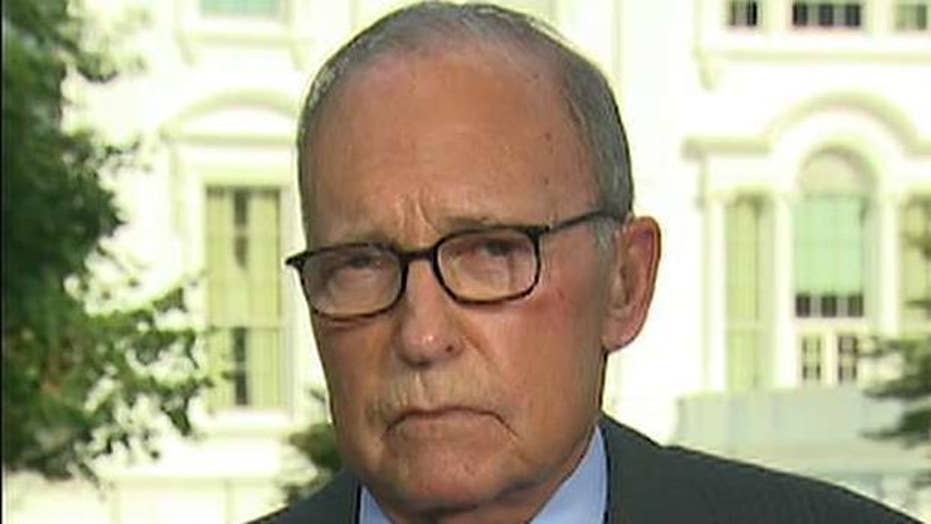 Larry Kudlow on health of US economy, possibility of new tax cuts

In the midst of brewing economic escalation, White House adviser Larry Kudlow said he couldn't promise a finalized trade deal with China by the 2020 election, but claimed a major trade announcement was coming, during an interview with CNN.

“I can’t make any promises. I don’t want to make any forecasts," he said Sunday, on "State of the Union." "I will repeat, however, that the negotiations between the two great countries continue. And I think it’s always better to talk than not to talk."

Kudlow claimed the announcement of a trade deal with China was forthcoming and said the U.S. is simultaneously closing a separate deal, which would encompass Mexico and Canada as well.

MSNBC ANCHOR ON POSSIBLE ECONOMIC DOWNTURN: 'ABOUT TIME WE GET A RECESSION'

"We're planning on having China come and… there’s an imminent announcement coming, this afternoon here… with a large-scale trade deal with China that would include agriculture, as well as e-commerce and other areas," he said.

"Not only is there a successful trade deal being brokered with Japan, but we have a terrific deal with USMCA — our partners in Canada and Mexico, which will add between half to one percentage point additional GDP per year."

President Trump announced via Twitter on Friday that the U.S. would be retaliating against $75 billion worth of tariffs imposed by China by raising rates on hundreds of billions of dollars worth of Chinese goods.

"For many years China (and many other countries) has been taking advantage of the United States on Trade, Intellectual Property Theft, and much more. Our Country has been losing HUNDREDS OF BILLIONS OF DOLLARS a year to China, with no end in sight," Trump tweeted.

"China should not have put new Tariffs on 75 BILLION DOLLARS of United States product (politically motivated!). Starting on October 1st, the 250 BILLION DOLLARS of goods and products from China, currently being taxed at 25%, will be taxed at 30%," he added.

"Additionally, the remaining 300 BILLION DOLLARS of goods and products from China, that was being taxed from September 1st at 10%, will now be taxed at 15%. Thank you for your attention to this matter!"

Trump also said he would be directing American businesses to find an alternative to China and claimed he's been empowered to do so, under the 1977 International Emergency Economic Powers Act (IEEPA).