Home » It's time to make the 'pain trade', according to a Bank of America chief strategist. He shares the 3 ways investors can position for a potentially treacherous market environment

It's time to make the 'pain trade', according to a Bank of America chief strategist. He shares the 3 ways investors can position for a potentially treacherous market environment

Bank of America’s bull and bear indicator, a measure of market sentiment, moved lower last week, showing how investors are a little less euphoric than they have been of late.

At a 7.1 rating, the indicator is down from its most recent high in February of 7.7. At this point, the rating was extremely close to triggering a sell warning, which was an indication that the market is extremely bullish.

The indicator must reach 8 to switch from neutral to sell.

With the indicator currently in neutral territory, Bank of America chief investment strategist, Michael Hartnett took a deep dive into bull- and bear-cases for markets in a research note on April 22.

By taking into consideration both perspectives, Hartnett provided an outlook on how investors should position for the second quarter. 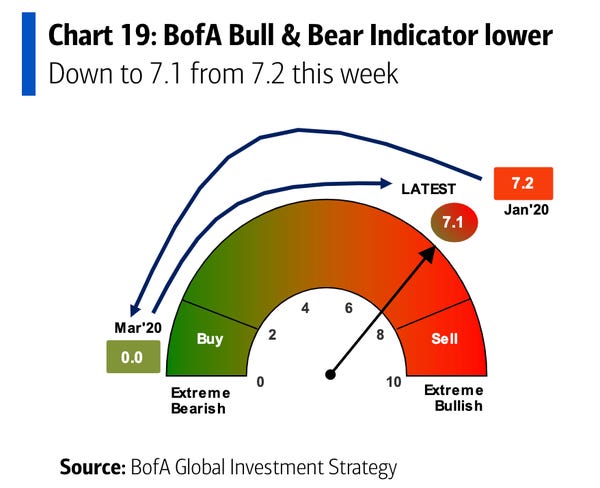 And last week, stocks saw $14.6 billion of flows and a record 9-week inflow into value stocks, according to the report.

Yet markets could still run higher, Hartnett breaks down the four-part bull case:

1) The potential for more stimulus

Despite the “speedy” vaccination roll out, re-opening progress is still slow, which could lead to more stimulus driving the markets higher, Hartnett said.

He highlights that $30 trillion in stimulus spending equaled a $50 trillion jump in the global stock market.

A taper tantrum refers to a surge in US Treasury yields. In 2013, there was a collective panic that took root when the Federal Reserve signaled it would slowly unwind its quantitative easing program, which triggered a spike in yields.

10-year yields rose by around 80 basis points in the first quarter of this year.

Despite the recent high inflows into stocks. Since the financial crisis, $2.5 trillion went into bonds compared to only $1.1 trillion into stock.

CEOs have driven stocks higher in recent years through stock buybacks, Hartnett said. In coming years, chief investment officers could also drive a rotation out of bonds and into equities, he added.

4) Around half of global stocks are below all-time highs

On the other side, there are growing concerns from strategists about market corrections. Sven Henrich, the founder of NorthmanTrader, recently said there is a stock market bubble, while Savita Subramanian, Bank of America’s US equity strategist, is expecting a 9% correction to the S&P 500 by the end of the year, according to an April 14 note.

Societe Generale’s strategist Albert Edwards, who is a perma-bear, has also highlighted a number of worrying indicators in a April 22 note.

Harnett points out this is the fastest and largest rally of all-time with a $51 trillion gain in global equity market cap since the March 2020 lows. He breaks down the 5-part bear case for what could slow this rapid rally.

Notorious short seller and hedge fund manager, John Hempton, who shorted Credit Suisse, a bank responsible for lending to Greensill and Archegos, recently said he expects many more Archegos-style events to take place by the end of the bull market.

Inflation on Wall Street will also mean inflation on Main Street, Hartnett said. Higher input prices combined with lower purchasing power could be a negative for earnings per share, he added.

There will be a shift towards rates, regulation and redistribution, Harnett said. This can be seen through the recent capital gains announcement made by President Joe Biden last week. This could drive modest to negative asset returns over the next 12 months, Harnett said. 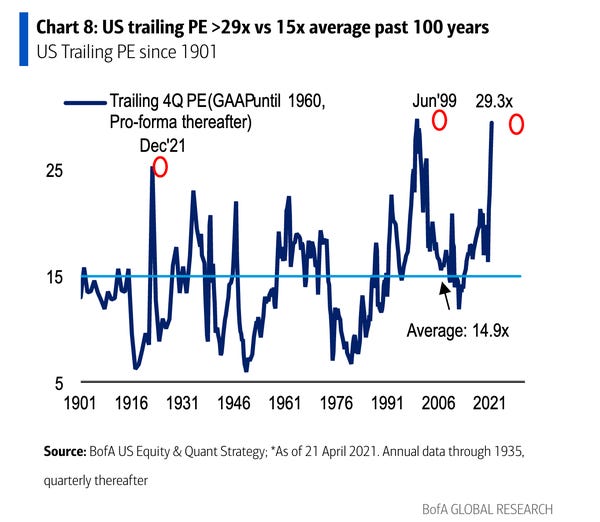 The Bank of Canada has begun tapering, which is the slowdown of quantitative easing programs. 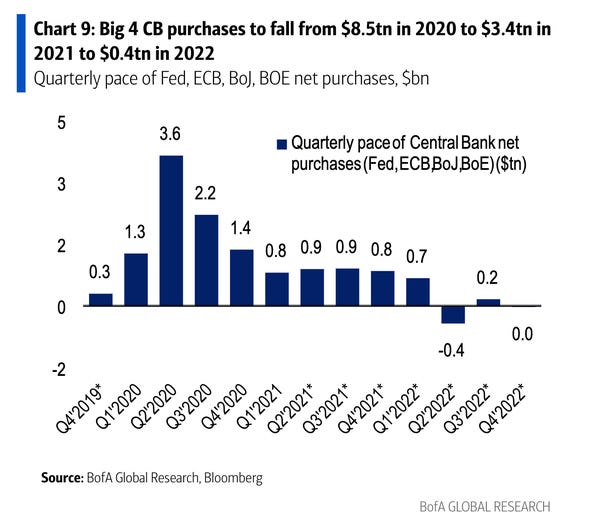 1) Invest in assets that benefit from higher yields

Two percent was once considered a ceiling for GDP and consumer inflation, however it is now the “floor”, Harnett said.

Investors should look at real assets over financial assets, for example, art and real estate. 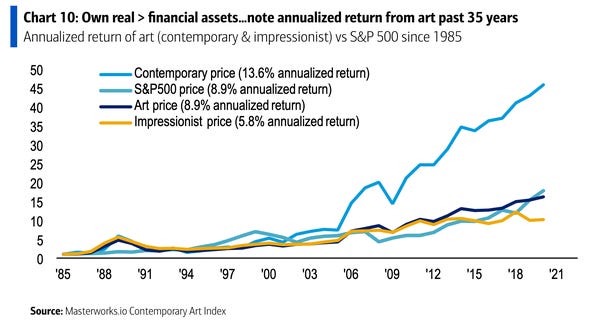 Investors should also look at the rest of the world “last of the laggards”, Harnett said. This includes UK/EU banks and resources, Japan consumer and emerging markets and industrials.

These areas will benefit as the vaccine allows for a rest of the world reopening in the second half of the year.

Get the latest Bank of America stock price here.