That’s definitely the case when it comes to one hot-button trade, which still has legions of participants despite an ugly blow-up earlier this year.

We’re referring, of course, to volatility short selling. After a market shock in early February caught traders off-guard and forced them to cover positions, billions of dollars were erased from popular investment products. Some even dissolved entirely.

That carnage, in turn, worsened widespread selling pressure as those investors covered shorts in droves. And all of a sudden, the market had a new black sheep.

Those traders don’t appear to have learned their lesson. As the chart below shows, they’ve rebuilt a net short volatility position to rival the one seen before the February meltdown.

In fact, they went as far as to add to it during last week’s market mayhem. The most recent weekly period in the chart ended on Oct. 11, the day the VIX reached a multi-month high. 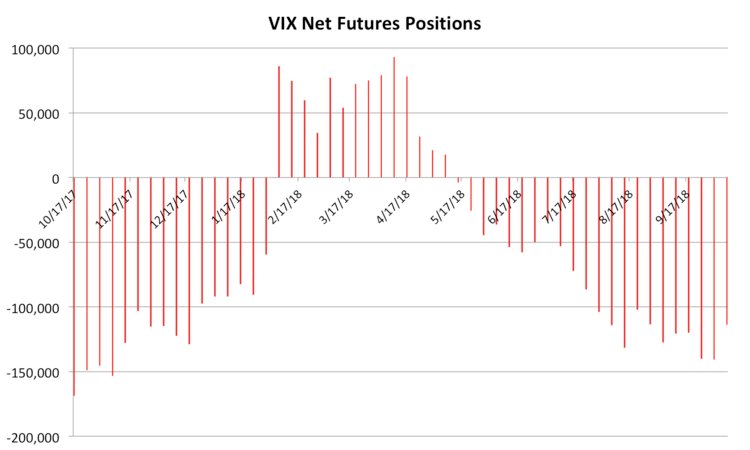 Their hubris wound up costing them dearly last week, when the S&P 500 capped off a sharp six-day drop, pushing the Cboe Volatility Index — or VIX— to 24.98, the highest since the mess eight months ago.

That cost volatility short sellers roughly $420 million, one expert told Bloomberg. It wasn’t as bad as the February incident, which saw the VIX exceed 37, but it was still a tough pill to swallow for volatility bears.

Morgan Stanley is hardly a fan of the short-volatility trade. Strategists at the firm spoke out against it after last week’s pan-market sell-off and accompanying volatility spike.

The firm argued that it can take five to six months to “build up cushions” against a reversion to the mean whenever there’s a surge in price swings. Because of that, an increasingly volatile market can quickly undo progress.

Morgan Stanley is also cautiously watching the sudden re-rating of so-called growth stocks — or companies seeing torrid earnings expansion. They say this is driving the ongoing uptick in volatility, which is hardly a fleeting trend, as traders increasingly pile into inexpensive value names instead.

These investors should instead be throwing in the towel on their beloved trade and going long volatility, says Morgan Stanley. The firm offers the following specifics:

“Like in January, the equity market has been the most responsive to a sector rotation-driven drop,” Andrew Sheets, Morgan Stanley’s chief cross-asset strategist, wrote in a client note. “We have liked owning hedges on Russell 2000, which tends to underperform S&P 500 in drawdowns. Credit vols have also risen but are still below average levels, again suitable for a long vol bias.”

That being said, common sense and expert advice hasn’t stopped short-volatility enthusiasts yet, and it probably won’t in the future. It’s likely that they used the recent VIX spike to replenish their short positions — an inverse buy-the-dip strategy of sorts.

However, their luck may soon run out, at least if a recent forecast from Bernstein comes true. Inigo Fraser-Jenkins, the firm’s head of global and quantitative European equity strategy, thinks volatility is going to shift higher on a long-term basis.

It seems like a sound thesis based on how the last couple years have played out. During 2017, the VIX averaged a record low of 11.10, implying that it had nowhere to go but up. Sure, it’s still below its long-term average of 19.33, but any reversion to the mean would translate to more volatile conditions.

But if short-volatility traders have shown one quality over time, it’s that they’re a stubborn bunch. They’re likely to go down swinging, no matter how dire the situation becomes.

This is a subscriber-only story. To read the full article, simply click here to claim your deal and get access to all exclusive Business Insider PRIME content.