London (CNN Business)The Omicron variant of the coronavirus is spreading fast. But even as scientists urge patience while they assess the severity of the strain and its impact on the efficacy of vaccines, the travel industry is feeling the pain.

“We’ve seen a little bit of a waver in the bookings,” Nick Calio of the lobby Airlines for America said during an industry press briefing on Monday.
What’s happening: The S&P 500 finished last week at a record close. But stocks in hotels, tour providers and airlines — which required emergency funding to make it through previous Covid-19 waves — remain vulnerable to Omicron fears.

These stocks have seen significant moves in both directions in recent weeks. But industry leaders are making clear that tighter government rules around travel, as well as customer anxieties, are having an impact.

In a letter to UK Prime Minister Boris Johnson, the chief executives of British Airways, Virgin Atlantic, Ryanair (RYAAY) and easyJet said “haphazard and disproportionate” travel restrictions risk “permanent scarring” of the industry.
They’re urging the government to scrap all emergency testing for fully vaccinated passengers.
Willie Walsh, head of the International Air Transport Association, said at a press briefing last week that when new variants are discovered, airlines bear the brunt of the economic damage. He pointed to “reductions in capacity following the new travel restrictions that were introduced recently.”
“We cannot keep shutting down aviation and shutting down economies, when in reality, it’s not providing any measures to restrict the transmission of the virus and more importantly, it’s doing huge damage to the industry,” Walsh said.
An unprecedented drop-off in passengers due to the pandemic has led to almost $700 billion in revenue losses for airlines, according to an assessment published last week by the UN’s International Civil Aviation Organization.
Some companies will need help to withstand another blow. Take Virgin Atlantic. Billionaire Sir Richard Branson’s Virgin Group and Delta Air Lines said Monday that they were pumping £400 million ($530 million) into the carrier, which doesn’t expect to return to “sustainable profitability” until 2023.
And yet: There are signs that despite the uncertainty, Covid-fatigued passengers are determined to keep flying, which may limit the impact.
The US Transportation Security Administration is preparing for a crush of travelers over the holidays. About 2.1 million people passed through airport security checkpoints this past Sunday.

US oil prices began 2021 just under $50 a barrel. They are now trading north of $70, and in October reached $85 — a seven-year high.
It should come as no surprise, then, that American energy stocks are among the market’s biggest winners this year, my CNN Business colleague Paul R. La Monica reports. 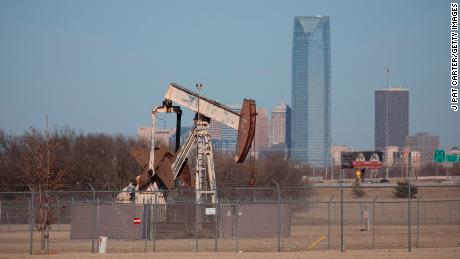 Running the numbers: Oil and natural gas exploration company Devon Energy (DVN) is the best performing stock in the S&P 500 through Monday, logging gains of nearly 180%.
Marathon Petroleum (MPC) and Diamondback Energy (FANG) are up more than 100%. APA, the parent company of oil giant Apache, and ConocoPhillips have nearly doubled as well.
As long as crude prices remain between $60 a barrel and $80 per barrel, oil stocks should stay strong in 2022 as well, according to Anastasia Amoroso, chief investment strategist with iCapital Network.
But longer term, they could face trouble, with investors weighing the viability of oil investment as the energy transition ramps up. Bigger companies like ExxonMobil (XOM) and Chevron (CVX), which are up 50% and 37% this year, respectively, continue to battle skeptical shareholders who worry about their strategies.
Watch this space: The International Energy Agency said Tuesday that a surge in new coronavirus cases will reduce oil demand by 100,000 barrels per day, while production in the United States, as well as countries like Saudi Arabia and Russia, picks up. That could keep pushing crude prices lower.
But the outlook depends in large part on the severity of the Omicron variant and how governments respond. The market, according to the IEA, remains in a “febrile state.”

A few solid trading sessions, and Apple (AAPL) could become the first publicly-traded company to notch a market value of $3 trillion.
The latest: Shares of Apple fell 2% on Monday, finishing the session at $175.74. But they remain within striking distance of what’s needed to cross the $3 trillion threshold.
The magic number? $182.85.
Remember: Apple’s market value first crossed the $1 trillion mark in August 2018 and passed $2 trillion in August 2020.
It hasn’t lost momentum. Apple shares are up more than 32% this year alone. The company has benefited from booming demand for its new iPhone 13 as customers upgrade their devices, as well as subscription services such as Apple Music, Apple TV+ and iCloud.
Sales surged nearly 30% to more than $83 billion in Apple’s most recent quarter, which ended in September. The company has $191 billion in cash on hand as well.
On the radar: Apple could have some company in the $3 trillion club before long. Microsoft, playing catch-up, is now worth almost $2.6 trillion.

The US Producer Price Index for November, a measure of inflation, posts at 8:30 a.m. ET.
Coming tomorrow: What steps will the Federal Reserve take to rein in price increases as it wraps up its December meeting?
Source: Read Full Article