The Sydney football personality at the centre of the alleged $250 million Westpac fraud has booked a flight to return to Australia from Europe on Saturday, the court has heard, after being uncontactable by the bank since mid-June.

Westpac disclosed last Friday it was investigating a potential serious fraud, after it said it had discovered loans had been given to its corporate customers using forged signatures and falsified invoices allegedly produced by Sydney-based Forum Finance.

The company is owned by former Sydney Olympic president Bill Papas, who also recently bought Xanthi Football Club. Westpac alleges that it has not been able to contact Mr Papas since June 15, soon after it made inquiries about the potential fraud. 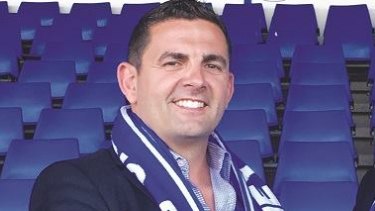 Alleged fraudster Bill Papas is set to return to Australia on Saturday, the court has heard. Credit:

Westpac has issued freeze orders and search warrants to obtain information related to the alleged fraud, and is now pursuing legal action to have Forum Finance put into provisional liquidation, an emergency measure to protect assets.

Panetta Lawyers principal Rocco Panetta, who has been hired by Mr Papas, told the court on Wednesday he had spoken to his client around five times over the past seven days.

During these conversations, Mr Panetta said Mr Papas had refused to disclose his exact location or explain whether he intended to defend the allegations against him, but that he had booked a Japan Airways flight back from Athens via Dubai to arrive in Australia on Saturday.

When pressed for details of Mr Papa’s overseas travel, including when and why he left Australia and his current location, Mr Panetta said he was stonewalled. “We did ask, he wouldn’t tell us.”

Jeremy Giles SC, acting for Westpac, said his team had not obtained sufficient assurance from Mr Papas or Forum Finance that no documents would be destroyed in making the case for an “urgent appointment” of a liquidator.

“There are some 96 or 97 contracts … almost all of them are false, in the sense they are not signed by the counter-party. The counter-party hasn’t got the equipment, it hasn’t been making payments on it,” Mr Giles said. “This is a case of quite serious dishonesty in the amount of circa $250 million. In those circumstances, there should be no delay.”

Federal Court Justice Michael Lee said he had not made a final decision on the liquidation application, which presented a “serious intrusion” into a company’s affairs but rejected the application to adjourn the Friday hearing.

“We are left at present in the position that Mr Papas is somewhere in Europe, yet refuses to tell even his solicitor his location,” Justice Lee said.

“With what might be described as a somewhat unfortunate lack of curiosity, it is apparent that no real inquiry has been made as to whether Mr Papas has a defence to the current allegations made against him.”

Mr Papas has been director of Forum Finance since 2011, a Sydney-based firm that leases equipment and provides digital and administration services to third parties. A number of clients contacted by The Age and Herald, including NYSE-listed manufacturing firm Boston Scientific, said they were surprised by the lawsuit.

“We’ve never experienced any real issues at all,” said Boston Scientific Australian managing director Martin Baker. “We use them for pretty basic administration services, like printer management. It’s one of those things where if you’re horrendous at it, you notice but if they do it well, you don’t notice.”

Court documents lodged by Westpac claim at least seven major clients including Coles, Woolworths, Veolia and WesTrac have been caught up in the fraud, that could cost Westpac hundreds of millions of dollars. Westpac has hired external lawyers to determine what went wrong, but insiders have blamed poor standards around invoice verification.

Mr Papas was stood down from his role as Sydney Olympic president last Friday, after news of the alleged fraud, which some fans said raised “concerns that could potentially implicate” the club.