One such project, according to Mr Cannon-Brookes, is a high-voltage cable that could transmit solar energy between Western Australia and the eastern states. "If we had West to East connectivity of power we would need vastly less storage in the NEM (National Electricity Market)," Mr Cannon-Brookes told The Sydney Morning Herald's Sustainability Summit on Monday.

"Don't forget, 75 per cent of our population is about three or four hours ahead of the sunlight in Western Australia. That gets us through the evening peak of 5pm to 9pm having energy come from solar in West Australia which is very reliable, very consistent and even within our national boundaries." 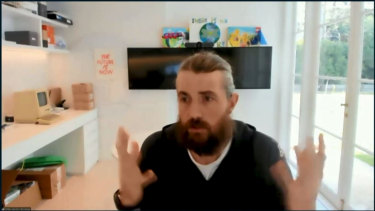 Mr Cannon-Brookes is an investor in the ambitious $22 billion Sun Cable project which plans to build the world's largest solar farm with a 10-gigawatt capacity covering 15,000 hectares near Tennant Creek in the Northern Territory, and a 22GW-hour storage plant.

The project aims to supply competitively priced electricity to the Darwin region and to Singapore via a 4500-kilometre high-voltage cable.

"Australia has a long history of exporting energy, we did it in coal, we're doing it now in liquefied natural gas, we should be exporting sun and wind," he said. "Intercontinental grids are a vastly more efficient way of transmitting energy to other countries than sticking it on a ship."

Mr Cannon-Brookes said cables were great conductors of electricity and provided a solution which should be used for other projects.

"I do not believe we will be the last," he said. "There should be 50 cables to the North. All of the technologies we're using are incredibly scalable. We've just got to find the economic model and make it make sense."

These projects could create "massive" amounts of jobs and operate as an economic engine.

"This is insanely large in terms of what is being attempted in global infrastructure, but something that is very necessary that's, I believe, eminently doable, and could be a huge industry for Australia, not just in one cable, but in many, many, many, cables to export energy and balance our grid," he said. "There are many other places we can get through the cable."

Prime Minister Scott Morrison has backed the use of gas to help Australian industry solve its energy challenges but Mr Cannon-Brookes said new gas projects should not be built.

"If people are saying 'Is gas a transition fuel?' then the answer is yes, it is today being used as that, it's about 10 per cent of our energy generation today in the NEM," he said. "Will it be a massive transition fuel of the next 20 years? No."

"If we talk about the best plan for the economy, it has to be over the next 20 years we have to electrify everything and generate all electricity largely with renewables," he said.

"The single best source of economic growth, strategic advantage for us over the next 20, 30 years is through renewable energy is through energy exports".

"We should have the lowest power prices in the world, right, in our country. Like, we have no shortage of resources, and we have all the technology to do that."

Our weekly newsletter will deliver expert analysis of the race to the White House from our US correspondent Matthew Knott. Sign up for the Herald‘s newsletter here, The Age‘s here, Brisbane Times‘ here and WAtoday‘s here.