The business partner of Bill Papas was planning to sell a home in Sydney’s inner west that is subject to freezing orders at a knock-down price, raising the suspicions of Westpac which has accused Papas and his partner of fraud, a court has heard.

The strange reversal in the value of the stately home in Rozelle did not go unnoticed by Justice Michael Lee, who on Friday was hearing an application by Westpac to freeze more assets that were allegedly purchased using the proceeds of a $400 million fraud. These included a yacht in Miami, that The Age and The Sydney Morning Herald revealed earlier this month was being actively marketed for sale. 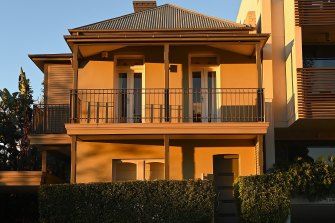 The home in Rozelle that was stopped from hitting the market at a bargain-basement price. Credit:Sydney Morning Herald

Westpac and two other lenders — Société Générale and Sumitomo — have taken civil action in the Federal Court, accusing Mr Papas, his business partner Vince Tesoriero and Forum Finance of defrauding the lenders of $400 million.

“I didn’t come down in the last shower,” a clearly frustrated Justice Lee exclaimed upon hearing that Mr Tesoriero had engaged agents who were marketing a property purchased in 2018 for $4.1 million for – a relatively speaking – bargain-basement price of $3.1 million to $3.3 million.

“It must be the only property in Rozelle purchased in an arms’ length sale for $4.1 million in 2018, which has stayed at that value or has decreased in value,” the judge said. The property is held by Mr Tesoriero on trust for Mr Papas and himself.

Justice Lee said the sale price “rings alarm bells… given what’s been happening with the property market in Sydney over the past three and half years.”

“I also want to be sure people have been playing with a straight bat when it comes to affidavits of assets,” he said.

Westpac said it was now also seeking a freezing order of Mr Tesoriero’s assets outside Australia after first securing a local freezing order, given it had emerged he and Mr Papas jointly owned the yacht in America.

Mr Giles said Westpac shared Justice Lee’s concerns about the value ascribed by Mr Papas and Mr Tesoriero to their assets in court documents separately filed by the men, pointing to the bank’s discovery of the yacht in Miami, which had not been previously disclosed by either man.

“I understand that a view was taken that although the XOXO yacht is owned by an Australian company that is trustee for an Australian trust, disclosure of its existence was not required because it was not an Australian asset,” he said.

Justice Lee granted Westpac’s request for a global freezing order be issued against Mr Tesoriero so that assets he owned overseas could be detailed to the court.

Mr Tesoriero’s lawyer Greg McNally, SC, told the court his client had been cooperating with McGrathNicol — the liquidators to the Forum Finance businesses — and had agreed to pause the sales process to nut out the valuation with Westpac.