One of the world’s most powerful investors is again urging that chief executives rapidly and boldly embrace the green economy or be swept aside by a wave of faster, smarter competitors.

Or in Larry Fink’s more colourful language, chief executives today cannot avoid the global transition now unfolding, but they can choose whether to recast themselves as unicorns, phoenixes or dodos. 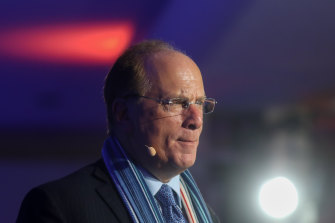 Larry Fink, chief executive officer of BlackRock on the opening day of the World Economic Forum in Davos, Switzerland, in 2020.Credit:Bloomberg

With US$10 trillion of other peoples’ money in its stewardship BlackRock is the world’s largest asset manager. Each year Mr Fink writes a letter to chief executives who might be hoping for a taste of that sea of cash, outlining BlackRock’s perspective on the business outlook.

Two years ago Mr Fink shocked many observers by telling the leaders that BlackRock would be placing climate change and sustainability at the centre of its investment approach. This would include dumping stocks in companies heavily invested in thermal coal and by demanding that companies it invests in outline their exposure to climate change risks, their contribution to emissions and their plans to reduce them.

The New York Times wrote Mr Fink’s focus on “stakeholder” interests rather than those of shareholders marked a watershed moment in capitalism.

This year Mr Fink drives home the point even further, telling business leaders that access to capital is a “privilege” rather than a “right” and “the duty to attract that capital in a responsible and sustainable way lies with you”.

He writes that in BlackRock’s view responding to issues such as climate change by embracing rapid decarbonisation is not only necessary to retain a social licence, but good business.

“Stakeholder capitalism is not about politics. It is not a social or ideological agenda. It is not ‘woke.’ It is capitalism.”

“Stakeholder capitalism is not about politics. It is not a social or ideological agenda. It is not ‘woke,’” writes Mr Fink. “It is capitalism, [his emphasis] driven by mutually beneficial relationships between you and the employees, customers, suppliers, and communities your company relies on to prosper.”

Citing the speed at which the world’s major car manufacturers have pivoted to electric vehicles over the past two years, Mr Fink says that any company not prepared for rapid decarbonisation will be brushed aside by disruptive competitors.

“The next 1000 unicorns won’t be search engines or social media companies, they’ll be sustainable, scalable innovators – startups that help the world decarbonise and make the energy transition affordable for all consumers,” he writes, using the jargon for new businesses that grow rapidly to reach a valuation of $1 billion.

Mr Fink believes the COVID-19 pandemic will not distract from innovation and change, but accelerate it, in part because the economy is awash with stimulus cash.

“With the unprecedented amount of capital looking for new ideas, incumbents need to be clear about their pathway to succeeding in a net zero economy,” he writes.

The businesses that flourish will be those that boldly leverage their advantages in expertise, market knowledge and capital during a period of fast transition to a decarbonised economy, he writes.

“Our question to these companies is: what are you doing to disrupt your business? How are you preparing for and participating in the net zero transition? As your industry gets transformed by the energy transition, will you go the way of the dodo, or will you be a phoenix?”

A guide to the environment, what’s happening to it, what’s being done about it and what it means for the future. Sign up to our fortnightly Environment newsletter here.