PORTLAND, Maine — A customs dispute at the U.S.-Canada border is threatening America's supply of a key fish used for popular products such as fish sticks and fast food sandwiches.

The Alaska pollock has a complicated supply chain. After being caught as part of the largest commercial fishery in the U.S., the fish are transported by ship to New Brunswick, Canada, near the border with Maine. They are then loaded onto rail cars for a brief trip down 100 feet (30 meters) of track in Canada, before being put on trucks and crossing the border into the U.S.

U.S. Customs and Border Protection has alleged that shippers are violating the Jones Act, which requires that goods shipped between U.S. ports be transported on U.S.-owned ships.

The agency has assessed more than $350 million in penalties to the shippers, records state. Two of the shipping companies have sued in federal court to stop the enforcement, which they characterized as heavy-handed, unexpected and unfair.

The dispute left 26 million pounds of fish in cold storage in Canada until a federal court judge issued an injunction on Sunday to let the seafood be shipped into the U.S. Members of the industry said they're concerned about permanent disruption to the seafood supply chain if the disagreement continues. 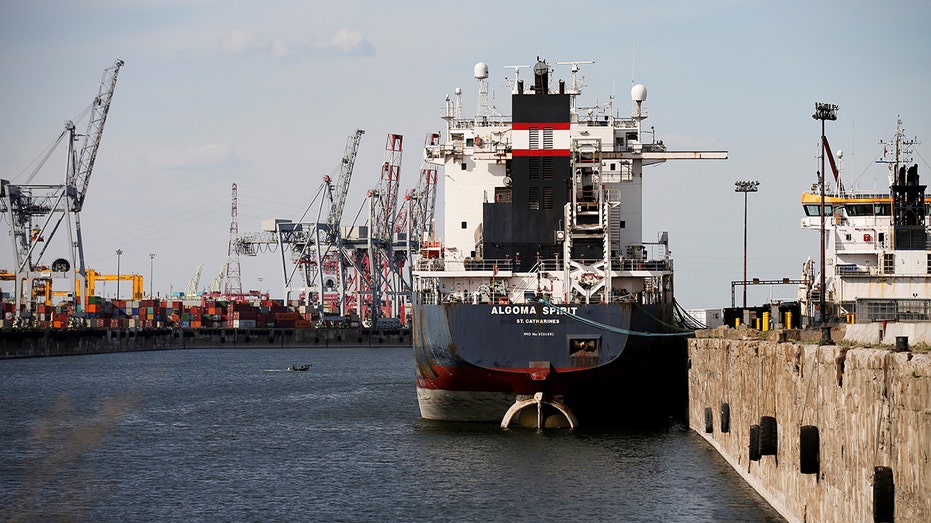 A cargo ship is docked in the Port of Montreal in Montreal, Quebec, Canada, May 17, 2021. A customs dispute at the U.S.-Canada border is threatening America’s supply of a key fish used for popular products such as fish sticks and fast food sandwiches

Gibbons said it was unlikely the fish in cold storage would start moving on Monday because it was a holiday in both countries.

U.S. Customs filed court papers in early October that stated the agency agrees with the shippers in desiring a quick resolution to the case. However, the schedule it has proposed in court for resolving the case would still take several weeks.

The agency declined to comment on the case because of the ongoing litigation, a government spokesperson said. The shipping companies behind the lawsuit, Kloosterboer International Forwarding and Alaska Reefer Management, which have offices in Seattle, also both declined to comment.

The dispute is happening at a bad time for the seafood industry because the business is currently making preparations for the busy Lenten season, said Michael Alexander, president of King and Prince, a Georgia company that makes seafood for the food service industry. Many Christians substitute red meat for fish during Lent, and pollock is in higher demand during that part of the year. Most fast-food chains' fish offerings, including the McDonald's Filet-O-Fish, are made from pollock.

"If we can’t get the pollock soon, then we will run out of time and other raw material; causing production lines – and people — to sit idle," Alexander said.

Massachusetts Gov. Charlie Baker, a Republican, has called on President Joe Biden, a Democrat, to help resolve the dispute. Baker said in a mid-September letter to the president that his state, home to some of the nation's largest seafood processors, stands to be hurt economically if the fish doesn't start moving again.

That could cost jobs in an industry still reeling from the coronavirus pandemic, he wrote.

"Processors in Massachusetts will exhaust their remaining inventory, halt production, and be forced to lay off workers," Baker's letter said.

The trucks carrying the fish enter the U.S. in Calais, a small Maine city located about 220 miles northeast of Portland. The city is dependent on cross-border economic activity, and that has suffered during the coronavirus pandemic, said Michael Ellis, the city manager.

"We're all hoping for the border to reopen because it's a big part of our economy," Ellis said.

This story has been corrected to say that the company Michael Alexander is president of is King and Prince, not King and Price.