London (CNN Business)For years, many of America’s top corporations have viewed annual shareholder votes as either a necessary formality or a nuisance.

Now, a wave of activism is forcing them to pay closer attention.
What’s happening: Shareholders approved a record number of resolutions in 2021 on issues related to climate and social topics such as diversity — signaling they increasingly view inaction on these fronts as a major financial risk.

“This is a startling proxy season,” Heidi Welsh, executive director of the Sustainable Investments Institute, told me. “I think it’s really going to change the way companies look at concerns on environmental and social issues raised by their investors.”

A review of top US companies from the Sustainable Investments Institute and partner As You Sow identified 34 majority votes this year for proposals regarding environmental, social and corporate governance, or ESG, issues. That’s well above last year’s record of 21 (and the number could keep growing).

The most high-profile shareholder victory has come from Engine No. 1, an activist hedge fund that took on ExxonMobil (XOM) after accruing just 0.02% of the oil giant’s shares. Critical of Exxon’s record on climate change, Engine No. 1 successfully installed three new directors on the company’s board — a huge coup that could force Exxon to make major changes to its strategy.
What changed: Engine No. 1 emerged triumphant by bringing powerful institutional investors like BlackRock (BLK) onside. Welsh said that represented a seismic shift and shows how times have changed.
“You cannot get those levels of support without buy-in from the major mutual funds,” she said.
Climate has been a key theme, with eight proposals earning more than 50% support. Political spending, diversity and Covid-19 have also featured prominently. At Netflix (NFLX), more than 80% of voters backed a proposal for more election spending oversight and disclosure. Resolutions for racial justice audits at Amazon (AMZN) and JPMorgan Chase (JPM) ultimately did not pass, but received more support than expected.
On the radar: Shareholders are showing a growing willingness to flex their muscle just as Trump-era rules making it harder to file resolutions are due to take effect, though the changes are being challenged in court by a coalition including As You Sow.
Still, having won big in 2021, many activists are gearing up for future fights. Engine No. 1, now looking beyond ExxonMobil, just announced the launch of a low-fee exchange-traded fund that will trade under the ticker “VOTE.”
The Engine No. 1 Transform 500 ETF, which launched with $100 million in assets, will invest in the 500 largest US stocks so it can pressure reluctant firms to change their ESG strategies. The hedge fund hopes to recruit legions of mainstream investors who back its approach.
“Rather than just invest in companies that are already incorporating ESG initiatives into their businesses, this product allows investors to take their seat at the table and be part of the change at companies,” Michael O’Leary, managing director at Engine No. 1, told me via email.

American drivers need OPEC and Russia to come to the rescue.
Gasoline prices are averaging $3.12 a gallon in the United States, according to AAA. The seven-year high comes just as millions of people hit the road for July 4th weekend, my CNN Business colleague Matt Egan reports. 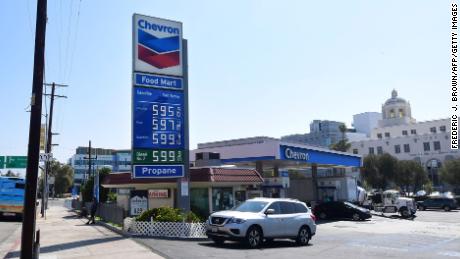 Demand for energy is so strong as the world economy reopens that prices will likely go even higher — unless Saudi Arabia-led OPEC and its allies start pumping much more oil soon.
US oil prices finished June at $73.47 a barrel, leaving them up 34% in 2021. That marks the best first half of a year since 2009, according to Refinitiv Oil Research.
Watch this space: Producers known as OPEC+ have been adding supply, but only gradually. They could announce a change of plans after a meeting on Thursday.
It’s possible the group will stay the course due to concerns about Covid-19 variants like the Delta strain. Oil producers remain cautious and want to avoid getting caught flat-footed if demand stalls.
But many analysts believe producers could take a more aggressive tack, giving drivers some much-needed relief.
“We believe they will answer the call to put more barrels on the market,” Helima Croft, global head of commodity strategy at RBC Capital Markets, wrote in a note to clients.

Popular trading app Robinhood just earned a notorious distinction: It was ordered to pay the biggest fine ever issued by a top Wall Street regulator.
The details: The Financial Industrial Regulatory Authority is demanding that Robinhood pay about $70 million, accusing it of “systemic supervisory failures” and of hurting investors by giving them “false or misleading information.”
FINRA’s sanctions on Robinhood focus on large-scale system outages that hit the platform in March 2020, as well as the options trading procedures at the heart of a lawsuit filed by the family of a 20-year-old Robinhood trader who died by suicide last year.
“The fine imposed in this matter, the highest ever levied by FINRA, reflects the scope and seriousness of Robinhood’s violations,” Jessica Hopper, head of FINRA’s department of enforcement, said in a statement.
Robinhood neither admitted to nor denied the charges. In a statement, the company noted that it has heavily invested in improving the platform’s stability, educational offerings, customer support and legal teams.
Step back: FINRA’s sanctions remove one of the major clouds hovering over Robinhood ahead of a blockbuster initial public offering later this summer. But the startup still faces plenty of scrutiny, raising questions about whether investors will back a firm garnering so much regulatory attention.
See here: Gary Gensler, chair of the Securities and Exchange Commission, has repeatedly expressed concerns about the “inherent” conflicts of interest in the payment-for-order flow model that’s central to Robinhood’s commission-free trading business.