Stockholders are licking their wounds this Labor Day weekend after a bruising two-day selloff nearly tipped the tech-heavy Nasdaq Composite into a correction.

Two days of heavy selling pushed the benchmark index down by as much as 9.8.% before it began paring losses.

By the time the dust settled, the Nasdaq had lost 6.17% and the S&P 500 had shed 4.3%, both avoiding the 10% drops from recent peaks that would have constituted corrections and dealt a blow to market sentiment still grappling with a downturn caused by the global COVID-19 pandemic.

For now, both indexes are still far above their March lows when the pandemic shuttered broad swaths of U.S. industries. The Nasdaq had surged as much as 76% off its bottom while the S&P 500 had rallied 60% as the Federal Reserve took unprecedented steps to stabilize the economy.

The massive gains and the subsequent selloff alike were driven by heavy investments in huge Silicon Valley companies that wield outsize influence on the indexes.

Investors have crowded into Amazon Inc., Apple Inc., Alphabet Inc., Facebook Inc., Microsoft Corp., Netflix Inc., Nvidia Corp. and Tesla – driving their market capitalization to 48% of the Nasdaq before the two-day swoon began. The seven stocks excluding Tesla made up 28% of the S&P 500.

“This may not be the biggest bubble of all time, but this is the most concentrated equity market of all time,” David Rosenberg, chief economist and strategist at Toronto-based Rosenberg Research, told FOX Business. 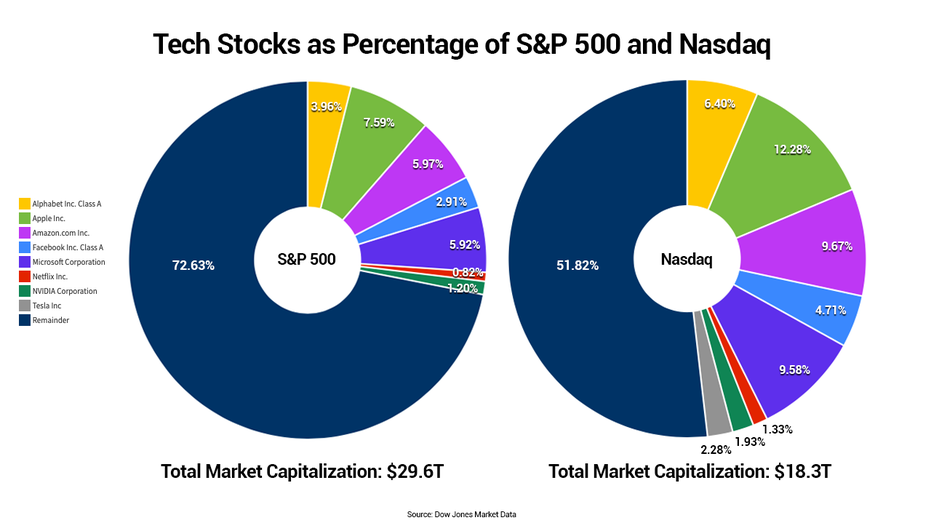 Signs of froth had been building for weeks as the Investors Intelligence poll showed 64% bulls and 16% bears. The last time the gap was that big was ahead of the December 2018 selloff that shaved 16% off the S&P 500 and 17% off the Nasdaq.

Surging prices had stretched valuations into the 99.6th percentile, just below their tech bubble highs, and caused stocks to reach levels above their moving averages that are seen less than 5% of the time.

When the S&P 500 finished at an all-time high on Tuesday, the CBOE Volatility Index, often referred to as the stock market’s fear gauge, closed at the highest level ever recorded during a peak.

It's becoming clear to professional investors that the volatility was heightened by rampant speculation in the options market, both from Japanese tech investor SoftBank Group Corp., which has recently bought billions of dollars of options linked to tech stocks, and a surge of interest in the instruments among retail investors.

“The premiums being paid, the volumes that we've been looking at, they've taken out the insanity of the tech bubble of 2000,” said Jim Bianco, president and macro strategist at Chicago-based Bianco Research.

As the prices on options — which allow investors to make bets that stock values will rise or fall — were being driven higher and higher, market makers who were on the other sides of those trades needed to hedge their positions by buying the underlying stock.

Doing so gave investors more confidence, causing them to buy more shares and more calls, and the market makers then had to buy more stock to hedge themselves.

And then the momentum-based trading algorithms kicked in.

“It just feeds on itself, one after another,” Matt Maley, Boston-based chief market strategist at Miller Tabak & Co., told FOX Business.

The market finally reached a breaking point on Thursday when the major averages suffered their steepest one-day decline since June with the S&P 500 dropping 3.51% and the Nasdaq tumbling 4.2%. Selling carried over into Friday’s session with the two indexes shedding another 3.05% and 5.08%, respectively, before paring their losses.

How far the market could fall from here remains to be seen.

Stocks would have to “break down” for Bianco to view this as “more than just a period of churning and consolidation.

Meanwhile, Rosenberg, who thinks a mean reversion is coming, wouldn’t be surprised to see “half of the run-up” off the March low retraced. He believes value stocks will outperform in relative terms, but that there needs to be a sustainable increase in inflation, a durable reacceleration in global growth, higher interest rates and a steepening yield curve before they “make you money in real time.”

One thing is certain, those investors who have a plan will emerge from this turbulence with their portfolios in the best shape.