ANZ Bank chief executive Shayne Elliott has predicted banks could be forced to rein in higher risk mortgage lending at some stage, as cheap debt drives up house prices and regulators worry about the market overheating.

With Australian house prices rebounding rapidly from the pandemic, the bank chief said property prices would remain “well supported,” which could ultimately force policymakers to step in, as has occurred in previous booms. 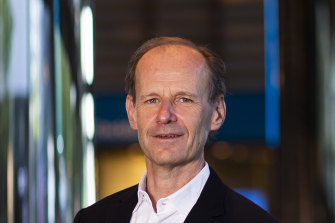 Mr Elliott said demand for property was strong because of extremely low interest rates, and the Reserve Bank had made it clear it wanted to keep rates at ultra-low levels for some time.

“That will lead to asset price inflation, we’re already starting to see it,” he said in an interview with The Sydney Morning Herald and The Age.

Mr Elliott said rising house prices tended to cause social and political problems, such as worries about first home buyers being locked out of the market. There would also be “some concern” from financial regulators about the risks from banks lending against high-priced assets.

The types of policies that could be implemented included restrictions on loan-to-valuation ratios, he said, and there had also been a “good debate” about debt-to-income ratios.

Despite the possibility of regulatory intervention, Mr Elliott said there were not yet any signs of more irresponsible lending by banks, and he did not believe the market was in bubble territory.

“There are reasons to believe that house prices will remain reasonably well supported,” he said. “We’re not predicting a house price correction or anything.”

The comments, which are consistent with predictions from other market observers, come as the government looks to roll back responsible lending obligations. Banks say the change will save customers time, but it is opposed by Labor, the Greens and consumer advocates, who warn it could add more fuel to the housing market.

On Friday, a Senate committee looking into the matter published a report that was split along party lines. Coalition senators argued the current legal framework was “potentially overly prescriptive” and vulnerable customers would still be protected under the rollback. Labor and the Greens published dissenting reports opposing the change. The matter will be debated in the Senate next week.

Banks say the rollback of responsible lending obligations will not change how much customers can borrow, but consumer groups and some economists have warned that any easing of credit could further inflate the cost of housing.

One of the bill’s critics, chief executive of the Financial Rights Legal Centre, Karen Cox, argued the bill would set consumer protection back a decade, and it came amid “record lending levels and runaway property prices”.