Home » Markets » Beware a ‘Trump recession’: JPMorgan unloads on the president’s role in erasing a full year of market progress — and lays out a scenario that could save the day

Beware a ‘Trump recession’: JPMorgan unloads on the president’s role in erasing a full year of market progress — and lays out a scenario that could save the day

The wayMarko Kolanovic sees it, the past two years of stock-market trading have been divided into two distinct stages: the period coinciding with President Donald Trump’smassive tax cuts, and the far less rosy span since then — one that’s been marred by trade-war fears.

The first phase was a glorious time to be a bull. Stock prices surged to new records and US manufacturing data vaulted higher.

Then Trump’s Twitter fingers derailed the whole enterprise — and then some.

For one, stocks absorbed some steep and sudden losses. Yes, they’ve recovered admirably amid intermittent signs of trade progress, but uncertainty has also crept into the minds of investors.

And then there’s the matter of manufacturing. As you can see in the chart below, it reversed course after Trump’s declared that “trade wars are good and easy to win.” Now it’s below where it was before either phase began two years ago. 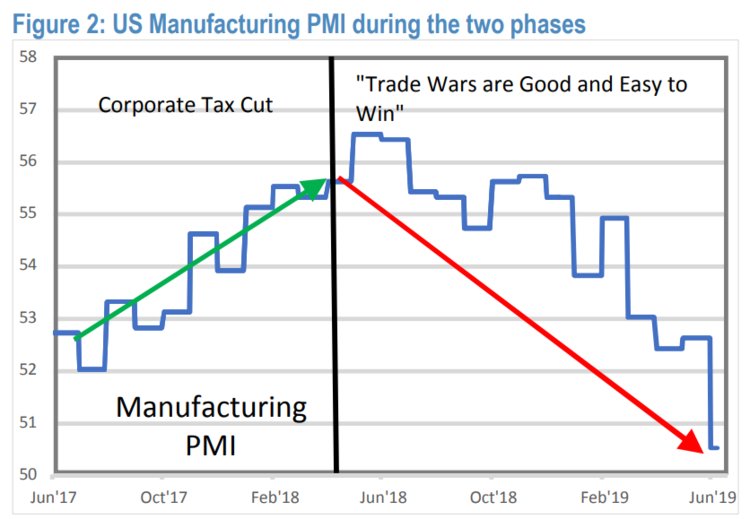 Beyond that glaring economic about-face, Kolanovic — who serves as the global head of quantitative and derivatives strategy atJPMorgan— also notes that certain corners of the stock market are pricing in a full-blown recession. He’s specifically referring to the trade-sensitive and high-beta segments.

Worse yet, he says “unprecedented divergence” between crowded defensive stocks and their unloved value counterparts has left investors no choice but to pile into those recession-exposed areas. It’s a sticky situation all around.

“The trade war has so far offset all benefits of fiscal stimulus and, if continued, may lead to global recession,” Kolanovic said. “If this recession materializes, historians might call it the ‘Trump recession’ given that it would be largely caused by the trade war initiative.”

He continued: “The market damage is ~100 times the tariffs collected, so it is clearly not making the country richer.”

But amid all of this turmoil, Kolanovic and his team at JPMorgan are still cautiously bullish on stocks. But why?

Put simply, they just don’t believe Trump will let the US economy slip into a recession heading into an election year. And as an extension of that, the president is certainly not going to abide a market sell-off that can be traced back to his actions.

For those reasons, Kolanovic says that at least half of the ongoing market wreckage could be “quickly reversed” if Trump makes any sort of concrete progress on the trade front. Allow him to explain.

“This would translate into a quick ~5% rally in broad markets, and a 10-20% rally in value and high beta,” he said. “As a strong market and avoiding a recession would boost re-election odds, it would only be rational to expect this outcome.”

An investment director at a $150 billion firm warns that US companies are engaging in a risky, unsustainable practice — and explains why traders should be looking overseas

'He's like a little kid that found this water gun' — Billionaire investor Stanley Druckenmiller takes Donald Trump to task over the trade war, and breaks down the long-lasting damage it could do