A Federal Court judge has criticised alleged fraudster Bill Papas’ claim he had been denied a fair hearing and ordered the extradition and arrest warrant process be hastened to ensure the Sydney soccer identity returns from Greece.

The Age, The Sydney Morning Herald and 60 Minutes published a joint media investigation on the entrepreneur on Sunday, interviewing key witnesses to the alleged fraud while revealing Mr Papas continues to live a luxurious lifestyle in Greece. 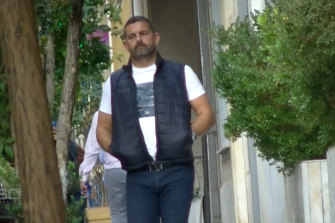 Defamation lawyer Rebekah Giles contacted the publications on Sunday ahead of broadcast with a statement from Mr Papas in which he claimed to have not been given an opportunity to defend himself.

“I have been deprived of the opportunity to fund any meaningful engagement with federal proceedings commenced by a well-resourced financial institution,” Mr Papas said through Ms Giles’s law firm.

The Federal Court issued an arrest warrant for Mr Papas last year after he missed court deadlines, breached freezing orders and displayed no intention of returning to Australia. Justice Michael Lee said Mr Papas was “no longer playing an active role in the case” and that he hoped the extradition process had not been put in the “too hard basket”.

“I noted with some degree of bemusement that it was suggested by a solicitor apparently acting on behalf of Mr Papas that he had been deprived of the opportunity to meaningfully engage with the Federal Court proceedings when in fact … Mr Papas did not seek to challenge the evidence,” he said.

Westpac’s lawyer, Jeremy Giles SC, said he had engaged with law enforcement about the extradition and arrest warrant and agreed Mr Papas had been involved in the court process. “Not only that, since then, Your Honour has made orders to ensure Mr Papas, the events that are happening in these proceedings are brought to his attention.”

The joint media investigation also revealed girlfriend Louise Agostino remains in Greece with Mr Papas after she left Australia last July. Westpac added Ms Agostino to its case in December, alleging she was part of a conspiracy to defraud the bank while working at Mr Papas’ firm Forum Finance.

Ms Agostino’s lawyer, Robert Ishak, told the court on Thursday she intends to defend herself against all charges and will travel to Australia for the October hearing, or be cross-examined remotely before then. “I assume it would not be a problem if it were via video conference,” Mr Ishak said.

Mr Papas stands accused of forging signatures to fraudulently obtain almost $500 million in loans from Westpac and other banks. The loans were allegedly used to prop up his business empire and football interests, including his ownership of Xanthi Football Club.

Justice Lee issued freezing orders over the Australian assets of Ms Agostino following a request from Westpac in January. Around $50,000 have been made available to Ms Agostino to fund her case, but on Thursday her legal team sought access to additional funds.

Mr Giles said Ms Agostino had been appointed as non-executive director of Xanthi FC, and he was concerned she may have other sources of income. Westpac alleges about $15 million of its money has been funnelled into an entity that owns Xanthi FC.

Mr Giles later said his team had identified two additional boats owned by Mr Papas that were being moored near Sydney. This masthead first revealed Mr Papas’ extensive luxury assets, including a portfolio of race cars and seaside apartments.