Outgoing ANZ Bank chairman David Gonski says protecting the bank's reputation and serving customers should be the top priorities, after chairing the lender through a turbulent period in which the industry's cultural problems were laid bare.

Mr Gonski will retire from ANZ's board at the bank's annual meeting in October to be replaced by former Optus chief Paul O'Sullivan, after a six-year period as chairman that included the industry-wide scandals uncovered at the Hayne royal commission into financial misconduct. 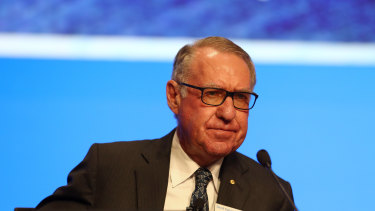 On the coronavirus pandemic that has upended swathes of the economy, Mr Gonski expressed long-term optimism that a vaccine and medical treatments would be developed, but acknowledged he did not know when this would happen.

In an interview, Mr Gonski said a positive effect of the Hayne royal commission was that banks were taking ethical and environmental, social and governance (ESG) issues "very seriously."

“I would say that for each of the banks, our job is to keep ourselves absolutely up to date and attuned to what our consumers want, and producing that at reasonable costs and indeed with the reputational standing that we want for our bank, which is excellent,” Mr Gonski said in an interview with The Sydney Morning Herald and The Age.

A long-standing critic of short-termism in business, Mr Gonski said focusing on customers and reputation should not be "novel," and highlighted a board committee ANZ had established to deal with ethical and ESG issues.

Looking back on the biggest challenges during his time as chairman, Mr Gonski also referred to efforts by the bank to reform its culture after the ferocious scrutiny of the royal commission.

"I think that establishing the proper culture and protections within the organisation to ensure that the reputation that we have is improved and nurtured, was something that was brought very clearly to the fore by the royal commission," Mr Gonski said.

ANZ's next chairman, Mr O'Sullivan, joined the bank's board in November and was previously the CEO of Optus. He currently chairs Western Sydney Airport Corporation, Optus and is a director of Coca Cola Amatil. Mr O'Sullivan said banking was at an "inflection point" and ANZ was committed to supporting the economy recover from COVID-19.

“My focus as chairman will be to continue the work we have been doing over many years to improve our operations and simplify the bank to benefit not only the owners of our company but also our customers and our staff," Mr O'Sullivan said.

Mr Gonski noted that Mr O'Sullivan's most recent industry of telecommunications and banking were both regulated sectors that deal with consumers directly. “I hope that history will say, it may not, that I was the right man for my time. I’m very confident he’s the right man for the next chapter," Mr Gonski said.

As well as grappling with pressure to improve cultural problems, banks also face a wave of fallout from the coronavirus pandemic, which has prompted hundreds of thousands of customers to temporarily suspend their loan payments.

Mr Gonski said a potential vaccine was only one way for the virus to be dealt with, alongside other potential treatments being looked at. He said he trusted the virus could ultimately be dealt with.

"I describe myself as a pessimistic optimist. What I mean by that is I’m positive at some stage we will get a vaccine. The more difficult question is when, and whether the first one we get will be effective and able to be distributed quickly," he said.

ANZ this month paid a reduced dividend to shareholders after suspending the payment for several months – a move he said served the interests of the company, its shareholders, its staff and its customers.