AMP’s new leadership team has declared the days of vertical integration are over, launching a new business model for financial advice that relies on selling professional services rather than peddling in-house products.

The wealth giant unveiled a roadmap for reshaping its financial advice business on Monday that includes packages to allow advisers to use AMP’s financial services licence or buy AMP products while retaining their own branding.

AMP’s revamped approach to financial advice includes removing institutional ownership of clients, meaning if a financial adviser wants to leave the AMP network, they can take their clients with them for no fee. 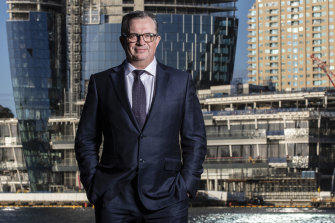 AMP managing director of advice Matt Lawler, who was appointed to the role in May, pledged to invest in technology, expand products and improve services for advisers over the coming years as the company focuses on lifting standards across the network.

“The whole theme about what’s been going on here … is to unwind this product connection and product integration with the advice and what the advisers do when they sit with clients and move it more towards an advice business,” he said.

“The royal commission really lit a fire under it. But very clearly, the future of the business model we’re building is the professional services business. It is purely focused on advice, there is no connection with or vertical integration of the product.”

The revamped policy follows a tightening of regulation for the financial advice industry, including mandatory university qualifications and an industry-wide exam designed to test knowledge of corporate laws and professional ethics. AMP’s advisers were singled out during the banking royal commission in 2018 after they were exposed for charging dead customers or selling unnecessary products.

AMP’s new strategy will lead to increased fees that will be gradually introduced over the next two years, however AMP Australia chief executive Scott Hartley stressed the new fees were industry-benchmarked and would “absolutely not” translate into higher costs for customers.

“We have to compete with the leading providers in the marketplace,” he said.

AMP also said it would scrap its Buyer of Last Resort (BoLR) policy by the end of the year. This policy forced AMP to buy client registers from retiring advisers for a pre-determined price, originally four times annual client revenue.

The BoLR policy is at the centre of a class action launched by AMP advisers after former chief Francesco De Ferrari reduced the mandated payout without warning in 2019 to 2.5 times revenue, plunging many advisers into financial hardship and prompting calls for a federal inquiry.

Mr Lawler said exiting advisers will sell businesses on the open market and this change, combined with removing institutional client ownership, gave advisers greater autonomy over how they run their businesses. He predicted this would lead to consolidation in the industry and said AMP could provide merger advice or assist with financing.

“Whereas today they are handcuffed or penalised if they want to leave … We think this frees the system up,” he said.

The Advisers Association chief executive Neil Macdonald said overall the changes would give advisers more choice over how they run their businesses and predicted the majority of advisers would stay in the network. “We don’t think many people will leave. The ones who were leaving will have already left.”

Mr Macdonald said other licensees had also raised fees over the past two to three years, adding he was confident higher prices would be offset by increased efficiencies through improved technology and AMP policies. “This moves AMP licenses into competition with the rest of the market. It is a competitive offer. Our view is that planners won’t have to put their price up again because of this.”

AMP has undergone a period of major change over the past 12 months, after announcing plans to split up AMP Capital, leaving the group with a small bank and a focus on financial advice. Newly appointed chief executive Alexis George will start in one week, following the sudden departure of Mr De Ferrari.