The bulls are continuing to run rampant in the markets. On Thursday, the S&P 500 hit another record high close bolstered by strong technology earnings.

Now, with the Federal Reserve once again stating its commitment to keep interest rates low and provide liquidity to the market, the question is whether anything will slow this bull rally down?

According to a new report from UBS, 41% of investors are considering increasing their holdings in stocks over the next six months, compared with 12% who are looking to reduce them.

Market events also continue to resonate with a mainstream audience from the Gamestop short squeeze in January to the cryptocurrency and non-fungible token frenzy in March.

Just this week, Shark Tank investor Mark Cuban went on mainstream daytime TV’s “The Ellen DeGeneres Show” to discuss the merits of Dogecoin, a joke cryptocurrency that has surged 119% in price over the last year.

Yet, some pockets of the market have started to see a slow down. Barclays released a new report this week that highlighted a decline in trading brokerage usage as lockdown restrictions started to ease in the UK. 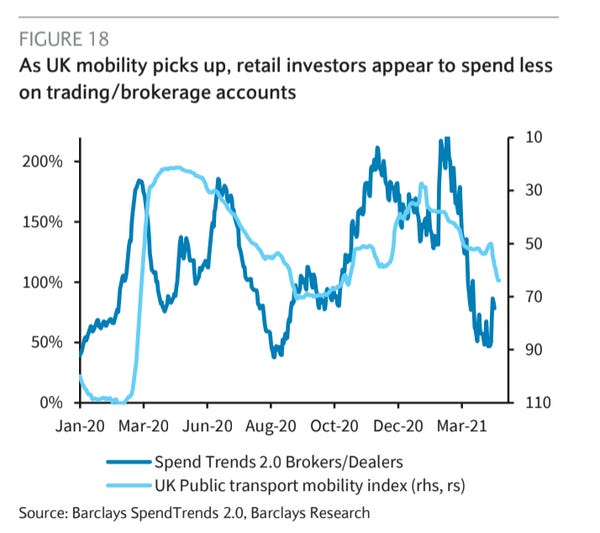 Bitcoin (BTC) also recently experienced a significant decline of around 17% after hitting an all-time high following the listing of the cryptocurrency exchange, Coinbase. And the SPAC boom, which was seen as representation of current market euphoria, has officially peaked according to a new JPMorgan report.

Warnings about potential market corrections have also started to grow from market strategists.

Bank of America’s US equity strategist Savita Subramanian expects a 9% correction in the S&P 500 by the end of the year, according to an April 14 note.

Sven Henrich, the founder of NorthmanTrader, recently explained why he believes the stock market is currently in a bubble, while John Hussman, the president of the Hussman Investment Trust, warned stocks could drop 25% to 35% in the near-term.

“We all know that investors have decided that US equity valuations don’t matter anymore – a stance usually forced upon investors in a bull market when equity market levels can no longer be justified by any sane valuation model,” said Edwards, in the note.

We broke down the six indicators Edwards cited in his April 22 report that he is watching and in turn, that investors probably should be watching too. 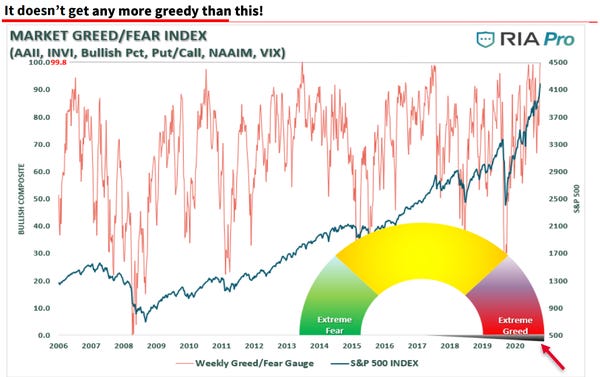 “This overbullishness combines with extreme levels of overvaluation and a market that is very Overbought,” Edwards said.

In an analysis of whether a stock market correction is likely, Roberts calls the current exuberance “nutty” highlighting that there have been very few points in history where the market was this significantly deviated, extended, overbought, and overly bullish.

“Without exception, the market corrected,” Roberts said. “Sometimes it was just a 10-20% decline. However, sometimes it is a lot more.”

The team at Advisor Perspectives created a chart that shows the average of four valuation indicators.

Jill Mislinski, an economic and market analyst at Advisor Perspectives, points out these indicators are not useful as short-term signals as over-valuation and under-valuation can last for many years.

But instead investors can use this to understand the long-term expectations of investment returns.

“At present, market overvaluation continues to suggest a cautious long-term outlook and guarded expectations,” said Mislinski, in the report. “However, at today’s low annualized inflation rate and the extremely poor return on fixed-income investments (Treasuries, CDs, etc.) the appeal of equities, despite overvaluation risk, is not surprising.”

3. Conseq Investment Management's chart of price/sales valuation from 1990 to 2021 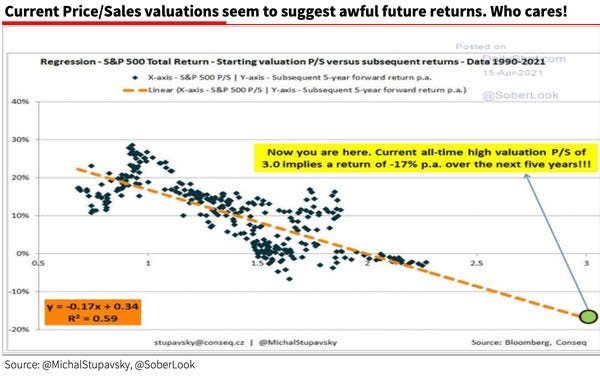 A regression analysis from Michal Stupavsky, an investment strategist at Conseq Investment Management, shows investors should expect extremely weak returns for US stocks over the five years.

“At best, US stock performance should be around zero,” Stupavsky said in a blog post.

The price-to-sales valuation indicator is at a new historical high, with the model predicting an average annual appreciation of US stocks over the next years at a level of -17% per annum, including dividends, according to the blog.

“This is, of course, a somewhat extreme forecast; on the other hand, it must be acknowledged that US stock valuations are currently in record, and it is precisely these valuations that are key to expected returns in the medium term,” Stupavsky said.

“If you are looking for extremes though, the chart below by @MichalStupavsky at Conseq IM shows just how much of an outlier the current situation is,” Edwards said.

Another chart from Lance Roberts of Real Investment Advisors demonstrates the S&P 500 has become extremely detached from the 200-day moving average, an indicator that determines overall long-term market trends.

The detachment signals the market is overbought, Edwards said.

Some market analysts, such as Subramanian, expect a correction to stop around the 50-day moving average, which would be a 9% correction.

However, Roberts said  there is a risk of a deeper reversion.

“A correction back to 3800 would only revert prices to mid-2020,” Roberts said. “As shown, over the last 5-years, corrections have ranged from roughly -10% to -33%. Notably, these corrections usually have reverted the index either to the 200-dma or beyond.”

“Furthermore, the entire market (small, mid, and large-capitalization companies) have all risen sharply in the liquidity-fueled advance from the March 2020 lows,” Roberts said. “Such provides plenty of fuel for a more significant correction if selling begins in earnest.”

5. US 12-month forward price-to-earnings ratio (market vs IT vs value)

Edwards highlights this elevation is a recent development that occurred when Federal Reserve chairman Jerome Powell pivoted on the decision to hike interest rates between December 2018 and January 2019, supercharging the stock market bull rally.

“It is only a recent phenomenon – that is nothing to worry about, I’m sure…,” Edwards said.

Although this a significant risk for technology stocks, Edwards thinks the even bigger risk could be a slide in technology earnings relative to the market.

Technology stocks have produced killer earnings results for the first quarter of the year. But Edwards questions what the impact will be on the stock market if there is a “lull in growth” and the economy is no longer receiving fiscal stimulus.

“But like everything else, I’m sure it’s nothing to worry about. Nothing bad can, or will, happen. The Fed won’t let it,” Edwards said.