Home » Industries » Trade war, tariffs and inflation will be the big worries this earnings season

Trade war, tariffs and inflation will be the big worries this earnings season

The second-quarter earnings season started in earnest on Friday with the first reports from big U.S. banksand investors are expecting the overall numbers to be strong.

The FactSet blended year-over-year per-share earnings growth rate estimate for the S&P 500, which combines results for those companies that have reported (companies with a fiscal quarter that ended in May) with those still to come, stood at 20.0% on Wednesday, above the 18.8% growth shown in the first quarter.

The blended growth rate for sales stood at 8.4%, compared with the 7.8% rate posted for the first quarter.

But against a backdrop of trade war concerns, rising inflation, a stronger dollar and tensions with many of America’s closest allies, companies are likely to be cautious in offering guidance. The Trump Administration late Tuesday unveiled 10% tariffs on another $200 billion in Chinese goods. Beijing immediately promised retaliation and criticized the White House for displaying a “loss of reason.”

Without the trade war, everything was in place for capital spending to rise and pull up real yields and wages, according to TS Lombard analysts Steven Blitz and Andrea Cicione. “But trade ‘war’ has arrived, mostly raising uncertainty that, in turn, stifles capital spending by business and households,” they wrote in a recent note.

“What investors need to focus on is at what point do these continued trade tensions start to impact corporate confidence and consumer confidence in the economy?” Turnill said in a Bloomberg radio interview.

“We’ve seen some signs of that, with some CEOs coming out and talking about deferring investment — warning the administration against further tensions. Those signals, I think, would be more worrying and indicate this is something more than simple rising trade tensions, which should be bought into.”

The following chart provided by Prattle shows how management sentiment on conference calls of large-capitalization companies dropped during the quarter, as outlooks became uncertain and executives grew more cautious. Prattle is a research automation company that analyzes language used in corporate communications, to help provide insight into broader trends in corporate sentiment.

Here are four things that are sure to show up this earnings season:

The U.S. and China had already imposed levies on $34 billion worth of each other’s goods last week, setting the stage for a trade dispute that is expected to hurt all of the companies that make and export products now subject to tariffs. The goods in question included steel, aluminum, whiskey, maple syrup, solar panels, newsprint, jeans and orange juice. To that list can now be added meat, fish, butter, eggs, vegetables, grains, tobacco, oil, chemicals, building materials, carpets and clothing. The full list can be found here.

The tit-for-tat action is the culmination of months of threats and counter-threats that have kept the major stock-market indexes like the Dow Jones Industrial Average DJIA, +0.38% and the S&P SPX, +0.11% trading in a narrow range. Analysts are now beginning to take a more cautious approach to the prospect of a full-blown trade war that could have a bigger effect on the economy.

Last week, an analyst from Morgan Stanley Wealth Management wrote that, “we no longer believe that the implications of Washington’s trade talk are benign.”

Investors can expect the topics of trade and tariffs to feature prominently in releases and on earnings calls for the makers of cars, aeroplanes, and food packaging, among many others. Trade associations have been vocal in calling on the administration to change its approach.

“While we understand that the Administration is working to achieve a level playing field, tariffs are not the right approach,” said the Alliance of Automobile Manufacturers in a statement. “Tariffs raise vehicle prices for our customers, limit consumer choice and invite retaliatory action by our trading partners. Automakers support reducing trade barriers across the board and achieving fairness through facilitating rather than inhibiting trade.”

The American Soybean Association said its members, with a crop that represents 41% of the value of products on China’s tariff list, are already suffering from a soft farm market and declining prices, with soy prices down more than $2 a bushel since talk of tariffs first arose in march.

At stake is an industry that exported $14 billion of soybeans to China last year, equal to 31% of overall U.S. production, making it the top agricultural export for the U.S.

“The math is simple,” said John Heisdorffer, president of the association and a soybean grower from Keota, Iowa. “You tax soybean exports at 25-percent, and you have serious damage to U.S. farmers.”

Companies can’t lean on favorable math, in the form of a falling U.S. dollar, to boost results anymore.

Quarterly results of multinational companies can be hurt when the dollar rises, as it reduces the value of earnings and sales from overseas operations, and it makes goods made in the U.S. more expensive to a foreign buyer.

The ICE U.S. Dollar index, which measures the dollar against the currencies of six of the U.S.’s largest trade partners, surged 5.0% during the three-month period ended June 29, compared with the 2.1% drop in the previous quarter and a 2.6% decline in the fourth quarter. 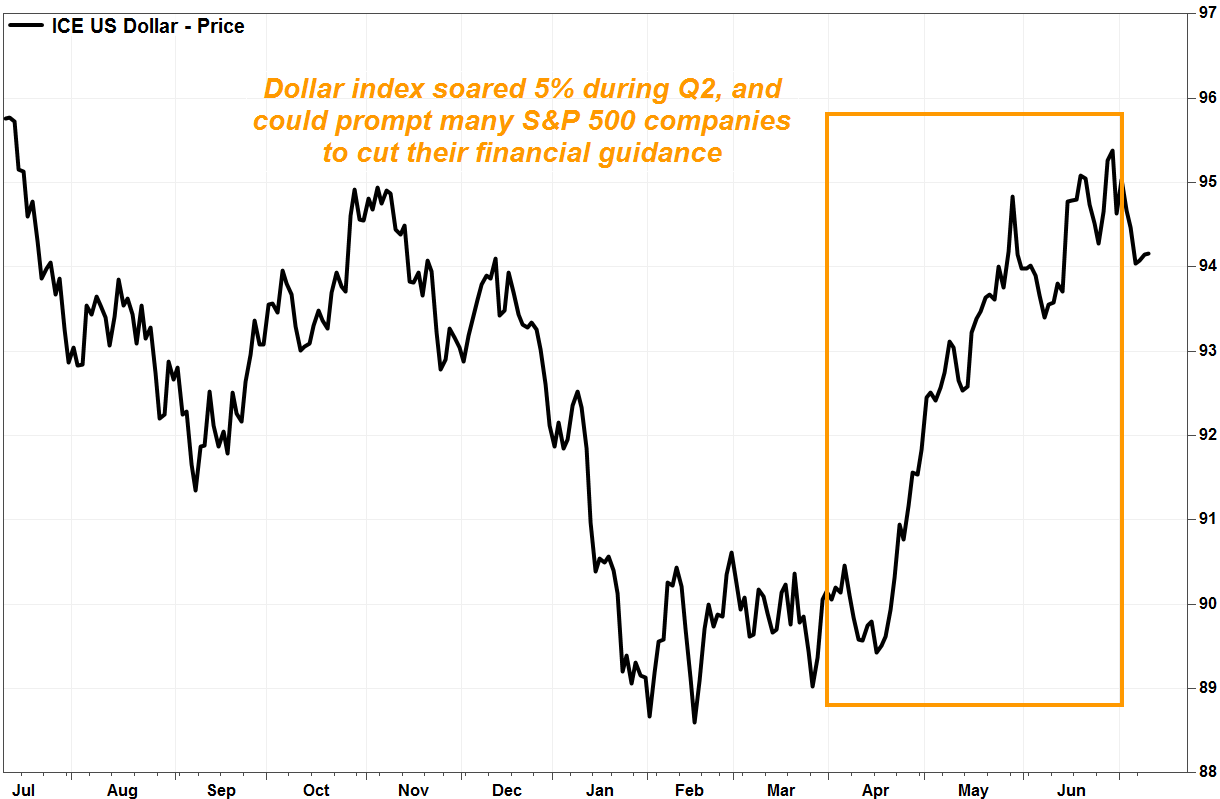 The dollar index ended the second quarter 1% below where it was a year ago, so the negative impact on that quarter’s results may be contained, but it could prompt companies to cut their outlooks for the current quarter and/or the full year.

Coca-Cola Co. KO, +0.16%already said last month that it expected currency translation to be a “headwind” of up to 1% for full-year revenue, compared with April guidance of a “tailwind” of 1%. And Carnival Corp. CCL, -0.60%cut its profit outlook for the year last month, citing current rates that were “moving against us.”

Don’t miss: Some companies are already warning investors that a strong dollar will pinch performance.

With about 38% of the total revenue of S&P 500 companies coming from overseas, according to FactSet, many others will surely follow with lowered outlooks. 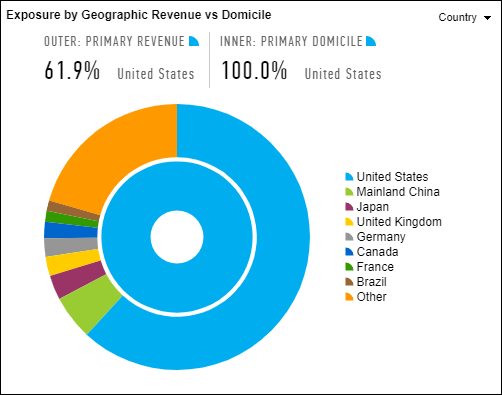 Major pharmaceuticals companies could be in line to adjust revenue guidance, as the group generates about 55% of its sales from outside of the U.S., according to J.P. Morgan analyst Christopher Schott, with Pfizer Inc. PFE, +0.03% Merck & Co. Inc. MRK, +0.37%and Johnson & Johnson JNJ, -1.43%most exposed to currency risk.

“While traditionally thought of as domestic ‘pure plays,’ the U.S. rails have historically underperformed following a prolonged period of U.S. dollar strength,” analyst Brian Ossenbeck at J.P. Morgan wrote in a note to clients. “Should the current U.S. dollar strengthen further, we expect pressure on volumes, realized price and mix for the U.S. rails and benefit for the out-of-favor Canadian rails.”

So investors should be on the lookout for companies that freely use language such as “constant currency,” “organic” or “local currency” to make non-GAAP results or their guidance look a little better than they would if the impact of currency moves was included, as per Generally Accepted Accounting Principles (GAAP).

The continued rise in inflation may please the Federal Reserve, but it’s taking a bigger bite out of companies’ bottom lines. The collateral impact of increased fuel and raw materials costs is eating away at margins, and leading companies from a growing number of sectors to adjust their outlooks.

In the first quarter, companies ranging from PepsiCo Inc. PEP, +1.04% to Hershey Co. HSY, +0.35%and United Parcel Service Inc. UPS, +0.41%reported how inflationary pressures were hurting margins, because of higher costs for raw materials, freight and logistics and fuel.

In the meantime, the S&P Goldman Sachs Commodity Index surged 7.6% during the second quarter, with crude oil futures CLQ8, +0.36%running up 14%, while the 12-month rate of wholesale inflation climbed to 3.4% in June, the highest in nearly seven years, from 3.0% in March. 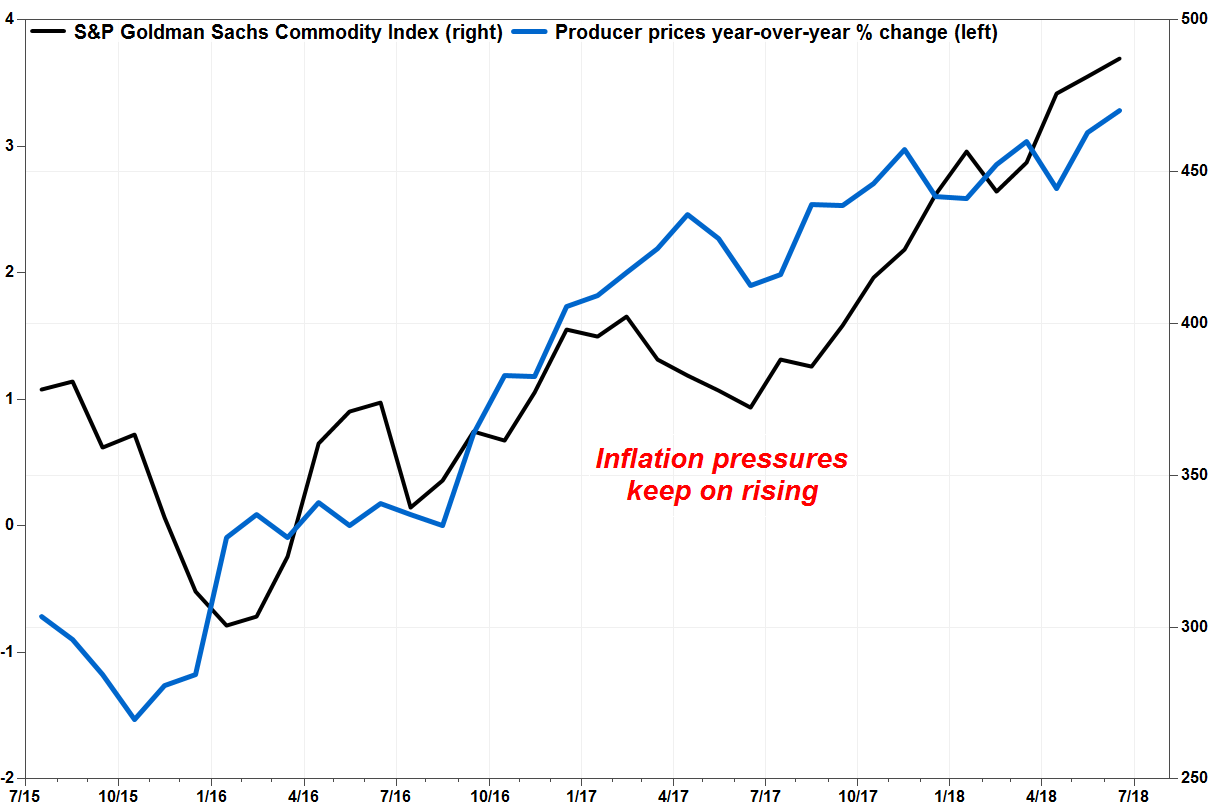 And with the U.S. unemployment rate hanging around the lowest levels in nearly two decades, labor costs are likely to begin rising as well.

Earlier this week, Sonoco Products Co. SON, -0.11%said it would raise prices on all composite cans and metal ends by 4%, as recent tariff announcements placed “unprecedented stress” on its suppliers’ feedstocks and input costs.

See also: Harley-Davidson stock rocked as EU tariffs hit where it hurts, and so does Trump.

And on Wednesday, American Airlines Group Inc. AAL, +2.17%cut its unit revenue outlook for the year, citing lower-than-anticipated domestic yields, which is the money airlines make on flight, and boosted its average fuel-price estimate by nearly 3%.

Investors should expect more of the same as earnings season hits its stride.