Home » Industries » IBM earnings beat fueled by mainframe sales, but that strength may not last long

IBM earnings beat fueled by mainframe sales, but that strength may not last long 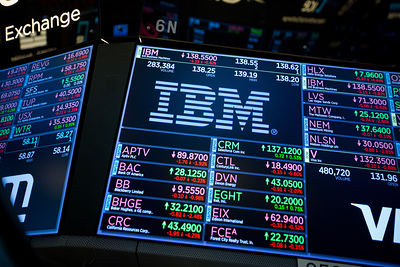 International Business Machines Corp. shares ticked higher in the extended session Wednesday after the tech giant topped Wall Street estimates on the back of Big Blue’s mainframe business, but some think the days of relying on that old technology for earnings beats are numbered.

The best-performing segment of IBM’s business against expectations was, again, the legacy mainframes business, an older business that IBM has tried to pivot away from but is currently finding gains amid a refresh. Systems revenue — which includes operating-systems software and the company’s mainframe business, including IBM’s z14 line of servers — jumped 23% to $2.18 billion while analysts were expecting $1.86 billion.

Earlier this year: IBM broke a long losing streak thanks to some of its oldest technology

“With regard to mainframe, I am not going to apologize,” IBM Chief Financial Officer James Kavanaugh said in a conference call Wednesday afternoon. “This is the most enduring platform that you’ve seen out there. And we continue to capitalize on gaining new emerging workloads under that platform.”

While a booming systems business is a positive for IBM, that trend isn’t sustainable and probably won’t survive into 2019, Andrew Bartels, principal analyst at Forrester Research, told MarketWatch. Bartels said tax breaks encouraged businesses to invest in hardware infrastructure, and large businesses that IBM caters to, like banks and financial services companies, have been driving IBM’s mainframe gains that were instrumental in breaking a long streak of revenue declines three quarters ago.

“The bad news is when you look across each of the segments,” Bartels said. “This is not encouraging for a company focusing on software and services.”

While revenue from IBM’s “Strategic Imperatives” group has risen 12% to $39 billion over the last 12 months, representing 48% of revenue, Bernstein analyst Toni Sacconaghi pointed out that a lot of SI growth comes from legacy equipment, with about 40% of mainframe revenue and about 60% of Unix hardware revenue classified as SI revenue.

Security revenue, which runs across business segments, surged 79 percent from a year ago to $1 billion, IBM said.

IBM reiterated its full-year adjusted earnings outlook of “at least $13.80” a share. Analysts, on average, expect $13.77 a share, according to FactSet.