Germany could take the notion of European banking union to market 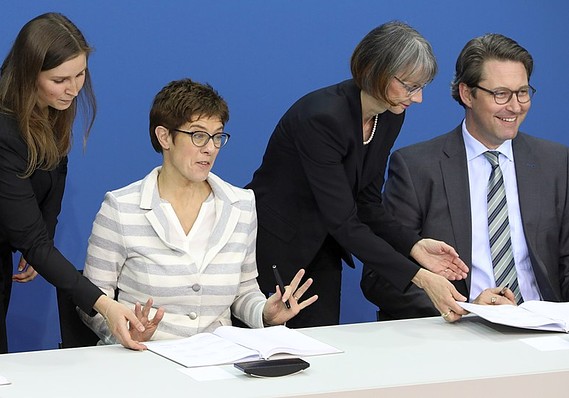 In the European Union’s single market, a market is not necessarily a union.

Annegret Kramp-Karrenbauer, the head of Germany’s ruling conservative party CDU and would-be successor to Chancellor Angela Merkel, last week suggested Europe move toward the creation of a “banking market,” which is needed, she wrote in the Berlin weekly Welt am Sonntag, to “secure the foundations of [Europe’s] prosperity.”

Her choice of words has puzzled the European policy makers currently immersed in the strenuous process of trying to complete the eurozone “banking union,” in spite of, or against, the German government’s unreformed skepticism.

Even more surprising was that “AKK,” as she is known, put her banking-market idea at the top of her draft program for Europe — written as a response to French President Emmanuel Macron’s “letter to Europeans” the week before. The German politician didn’t detail her proposal, but the general meaning was clear: a firm “thanks, but no thanks” to a fast completion of the eurozone banking union.

The eurozone has a single banking supervisor: The ECB oversees the area’s most systemic banks — currently, 117 of them. It has also set up a body to oversee the resolution of failing banks, to spare taxpayers the cost of painful bailouts. What it needs to have a true banking union is a joint deposit-guarantee scheme, i.e. a form of insurance policy that would complement national guarantee funds in case of a severe banking accident. Germany has never hidden its hostility to this, arguing that some member countries such as Italy or Portugal should first clean up their banking systems. In euro lingo, Berlin wants “risk reduction” to happen before any form of “risk sharing.”

Kramp-Karenbauer’s pointed proposal of a “banking market” seems to have another goal altogether: In that vision, banks are meant to lend to the economy, and they should be able to do so freely throughout Europe. They need faster progress toward the completion of a true capital-market union, which would allow capital to move freely within the eurozone instead of being trapped within national borders by fragmented regulations, as it is now. But that shouldn’t entail the type of “fiscal transfers” dreaded by German voters.

AKK mentioned banks in her reply to Macron, even though the French president, in his own letter to Europeans, had omitted any mention of his old eurozone reform pet project. Maybe the French leader is resigned to the fact that no votes are to be gained on this matter in the upcoming European Parliament elections. In any case, the German CDU leader may have felt that she had to set the limits of future conversations with France.

Germany has also embarked on a bit of soul searching on the state of its domestic banking industry. Under government pressure, the country’s two largest and troubled banks, Deutsche BankDBK, +0.56%and CommerzbankCBK, +0.49% , are considering a merger that may at some point need an injection of capital in the form of taxpayer money. Meanwhile, the large German public banking sector remains in need of restructuring and consolidation.

Barron’s: Deutsche Bank on how to fix European banks

Granted, it may be wrong to worry too much about the German banking sector, whatever its sorry state. First because Germany can take care of its own banks. The country has little debt and has booked a fiscal surplus ever since 2014. Its politicians may feel that they don’t really need European banking union. A banking market, on the other hand, could provide the country’s lenders some space to grow and expand, backed by the German domestic economy.

There lies the second reason that fears about a serious German banking crisis may be overblown. Nonperforming loans on the German banks’ balance sheets only amount to about 1.6% of total loans. The comparable ratio was 9.4% for Italy, 5.3% for Portugal and 3% for France as of September 2018, according to data from the European Banking Association. Businesses remain strong in spite of the current economic slump, and Germans like to pay their debts in full.

Promoting the idea of a “banking market” that would afford some space for the German banks to grow and expand in their immediate vicinity makes sense from Berlin’s point of view. Even as the prospect of a tighter, stronger banking union that would serve as an extra shield for the eurozone against future crises becomes more distant by the day.

Leveraged loans are in uncharted territory and that’s a big risk, Moody’s says

Big 5 banks had a tough time trading in volatile markets

Wells Fargo spent $7.3 billion to help buy an earnings beat — was it worth it?
Politics News