Apple Inc.’s stock rally has finally done something that it hasn’t been able to do, in 20 failed attempts, since the demise of the dot-com bubble.

The technology giant’s stockAAPL, +0.85%rose 0.9% in afternoon trading Tuesday, as it heads for a sixth straight gain. That would be the longest win streak since the six-day stretch ending April 23, which followed a nine-day win streak through April 8.

What makes the current streak different, though, is that all five of the previous daily gains were of more than 1%. The last time the stock rose at least 1% for five straight days was the seven-day run ended Aug. 29, 2000. Since then, there had been 20 four-session streaks of at least 1% gains. 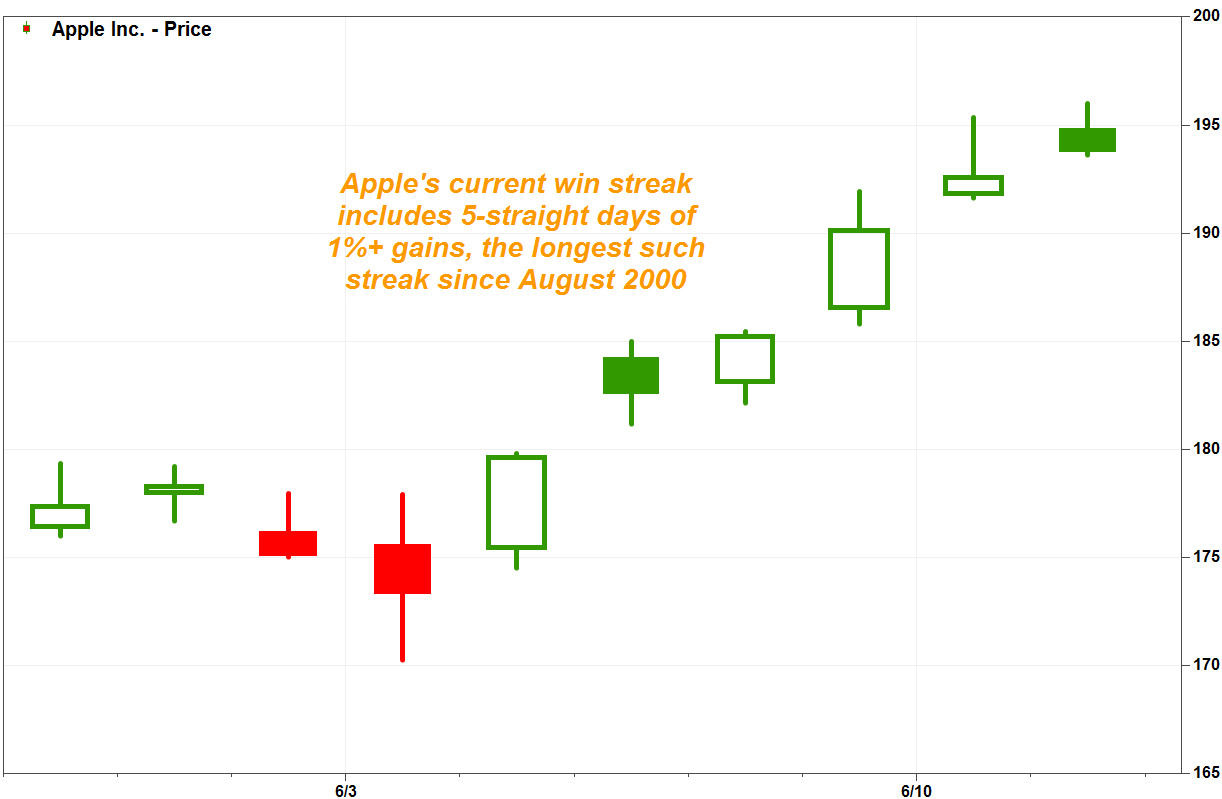 And, if history is any guide, Apple investors shouldn’t be emboldened by the current win streak. About a month after the last streak, on Sept. 29, 2000, the stock suffered its biggest-ever one-day plunge, losing 52% as a profit warning helped fuel the tech wreck and the bursting of the dot-com bubble.

The good news, however, is that the current streak suggests all the things investors worried about last month may not be as bad as feared. 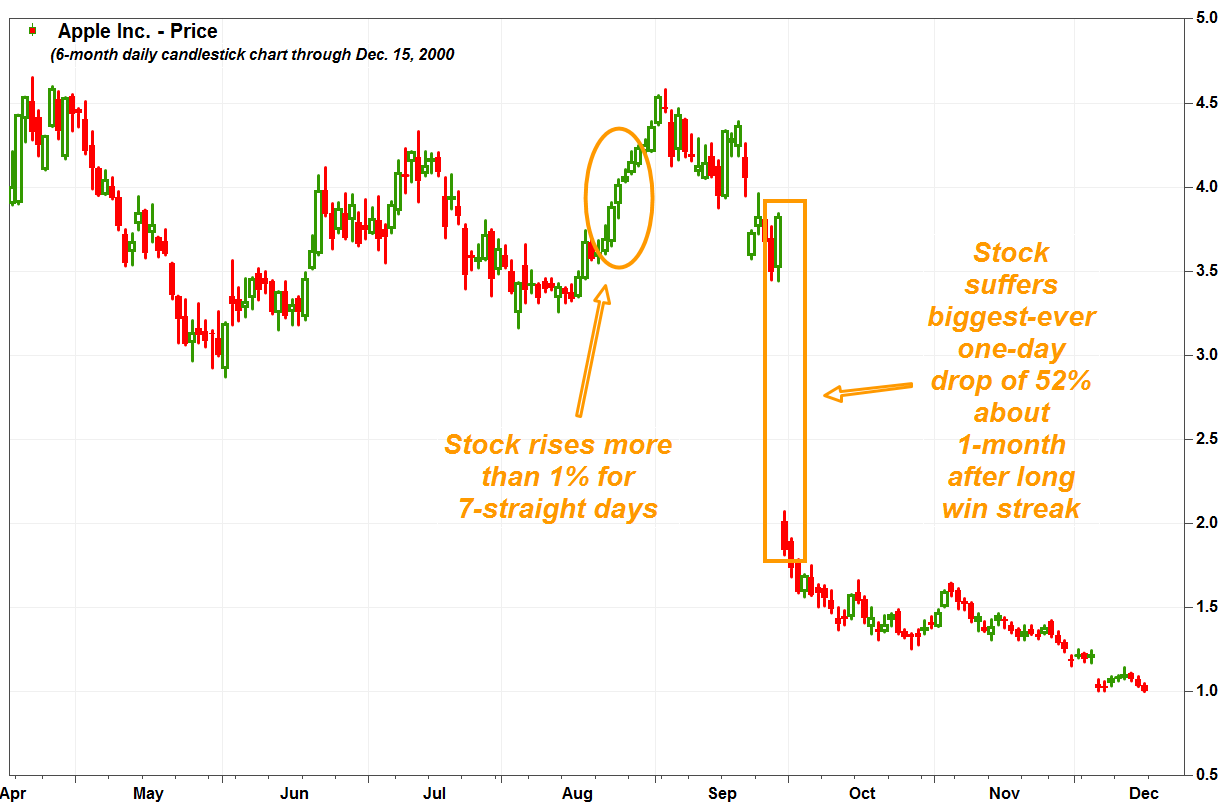 The stock tumbled 13% in May, to snap at four its streak of monthly advances. The biggest concern then was the U.S.-China trade war, as Apple’s supply chain was set to be hurt by U.S. tariffs on imports from China, and as demand for iPhones could be hurt by retaliatory tariffs on U.S. exports into China.

But as Wedbush analyst Daniel Ives said in a note to clients last week, China-trade-war damage has been “more noise than reality.”

He said that while uncertainty has pressured Apple’s stock, “the fundamental impact on iPhone production and the potential cost increases are thus far containable with shares baking in a much more draconian/worst-case scenario.”

And Apple’s services business, which the company is trying to build out to ease concerns over slowing iPhone sales growth, is “relatively insulated from trade swirls,” Ives said.

Evercore ISI analyst Amit Daryanani said in a note Tuesday that while investors had been more focused on iPhone trends, fundamentally, the services business “is a critical part” of his bullish thesis, given Apple’s ability to grow and monetize the installed base. He reiterated his outperform rating and $205 stock-price target.

Also helping improve sentiment around trade, U.S. Treasury Secretary Steve Mnuchin said over the weekend that a “candid discussion” he had with China’s central bank governor, Yi Gang, was constructive.

What had also pressured Apple shares in May, as well as the broader stock market — the Dow Jones Industrial Average, of which Apple is a component, shed 6.7% in May — was growing concerns that the economy was slowing. But Federal Reserve Chairman Jerome Powell’s comment in a speech last week that the Fed would “act as appropriate to sustain the expansion” seemed to confirm the market’s expectation that the Fed was ready to cut interest rates.

Another drag on sentiment had been worries about antitrust scrutiny by federal regulators of Big Tech. But as MarketWatch’s Jon Swartz wrote, experts are of the view that any attempt to break up Apple — along with fellow tech titans Amazon.com Inc.AMZN, +0.26% , Facebook Inc.FB, +1.70%and Google parent Alphabet Inc.GOOGL, +0.47%GOOG, +0.54%— would fail unless regulators first redefine what constitutes a monopoly.

See also: Feds target four of the biggest tech companies in U.S., and their stocks are getting slammed.

To Intel, 27% women in the workforce mean it has reached ‘full representation’

Apple to reportedly slow hiring in some divisions
Politics News