Dan Silver, co-chief executive of investment platform Stake, has won the latest edition of the Shares Race with a portfolio value of $117,792.

The supercharged performances of Silver's top picks –Electro Optic Systems, a defence and space tech firm, and Zip Co, the "buy now, pay later" rival to Afterpay – contributed most to the victory. 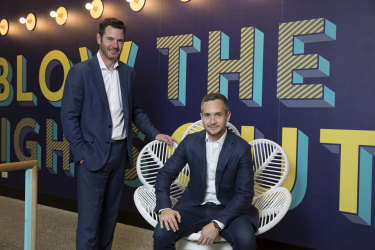 Zip co-founders Peter Gray and Larry Diamond. The Afterpay rival now has a market capitalization of more than $1 billion.Credit:Jessica Hromas

Zip's share price continued to soar after it reported a 138 per cent increase in revenue to $84.2 million for the year ended June 30.

She held the best-performing stock tip of all, MyFiziq. Her initial $10,000 in the body measurement phone app was worth $19,333. 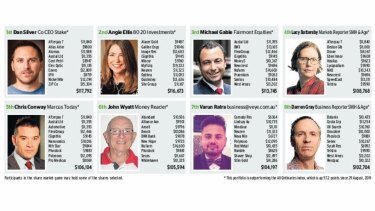 Michael Gable, of Fairmont Equities, was third after his best performers – Flexigoup and BWX – fell back in the final week.  His portfolio was worth $113,745.

The Shares Race is a fantasy shares game that runs for six weeks. Players start with $100,000, divided evenly across 10 stocks. Their progress is reported weekly.