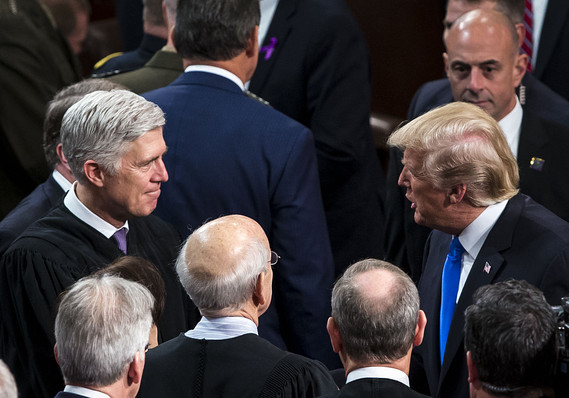 Corporate America has racked up lots of victories at the Supreme Court in the past few years. Now they’ll get another big win when President Trump replaces retiring Supreme Court Justice Anthony Kennedy with another conservative who’ll likely be even more pro-business.

The president’s final four candidates — Brett Kavanaugh, Amy Coney Barrett, Raymond Kethledge and Thomas Hardiman — are all expected to cement the strongest pro-business leanings on the court in decades.

Kavanaugh and Kethledge have been especially critical of the expanding powers of federal agencies to issue new regulations, a source of chronic complaints by big and small businesses alike. These agency rules touch on a broad swath of critical issues such as global warming, labor rights, overtime pay, credit-card fees, drug pricing and access to afford housing.

Kavanaugh has even doubted the constitutionality of the Consumer Financial Protection Bureau, a controversial watchdog created during the Obama years that has been the source of much angst among Republicans.

If Kavanaugh were to join the court, “then it is possible the entire CFPB could be eliminated,” said analyst Brian Gardner of Keefe Bruyette & Woods.

The Supreme Court has been trending in a pro-business direction for quite some time, however. In the most 2017-2018 session, for example, the U.S. Chamber of Commerce joined 10 cases and was on the winning side in nine of them.

It’s not just conservatives siding with business, either. At least two and in some cases all four liberal justices took the side of big business in six of those 10 cases, according to article by a pair of law professors in Atlantic magazine.

Kennedy is famous for a more liberal approach on major social issues such as abortion, gay rights and affirmative action. What’s less well known is that he’s generally ruled as a traditional conservative on commercial matters.

In his last term, Kennedy cast the key vote in several 5-4 decisions that were viewed as pro-business.

In Janus v. AFSCME, the court’s conservative majority upended a 41-year-old precedent by ruling that government workers can opt out of public-sector unions on free-speech grounds. The ruling could deal a severe blow to the ability of unions to organize and lobby lawmakers.

Some liberals worry a more conservative court could eventually extend the ruling to privately run unions.

In another high-profile case, Kennedy sided with the court’s four conservatives to reject a federal lawsuit against American Express AXP, +1.41% accusing the card company of anti-competitive behavior.

Related: What the American Express Supreme Court victory means for you

Once in a while Kennedy has sided with liberals, usually in cases that involved environmental rights or racial discrimination.

One area that could undergo a subtle but unmistakable shift is how the court views lawsuits based on “disparate impact,” the idea that discrimination could be in play even no actual evidence of bias is found.

Encouraged by a sympathetic Obama administration, liberal groups launched suits arguing that an action was discriminatory if it had a more negative impact on some sexual, racial or ethnic groups than others.

Most notably, Kennedy joined four liberals in a 2015 case that accepted the use of disparate-impact reasoning to find that federal fair-housing laws were being violated.

The replacement for Kennedy probably won’t look kindly on that sort of reasoning. The Trump administration is already trying to roll back Obama-era guidance that endorsed the use of disparate-impact arguments, but it may need the court to eventually step in to cut through the thicket of lawsuits surrounding the issue.

A few other major decisions that were largely the handiwork of Kennedy also face a more uncertain future.

Kennedy was joined by three other conservatives on the court to junk a longstanding ruling that prevented states from taxing Internet sales of out-of-state sellers, a case in which businesses were divided. That ruling is like to stand unless Congress intervenes — no sure thing since Trump favors Internet taxation.

Kennedy also wrote a limited opinion for a 5-4 majority that effectively gave small businesses under certain conditions the right not to serve gays or lesbians on the grounds of religious freedom . The ruling was quite narrow, however, and big businesses are generally subject to stricter legal standards that require them to serve all comers.

Kavanaugh, 53, is the most experienced of the potential Kennedy replacements and a Washington veteran who sits on the D.C. Circuit Court of Appeals. Yet some conservatives view him as a squishy judge in the mold of Chief Justice John Roberts mainly because of one decision in which he was deemed insufficiently critical of Obamacare. He was also a former clerk to Kennedy, another strike against him.

Businesses are on board with Kavanaugh, though. He’s seen as one of the leaders in a conservative legal movement that questions whether the courts have granted too much leeway to government agencies to make law even in the absence of express congressional directives — the so-called Chevron deference.

The background of Hardiman, 53, and Barrett, 46, reveal less about how they would rule on commercial matters. Barrett has been on a federal bench for just a year and Hardiman has not been involved in as many high-profile business cases. Barrett is seen as more reliably conservative among the two.

Many leading conservatives appear to prefer Barrett, with Kavanaugh the runner-up.

“Brett Kavanaugh is an excellent judge, but is he the best choice? There’s a difference between a home run and a grand slam,” wrote David French, a Harvard-educated lawyer and columnist at the conservative National Review magazine.